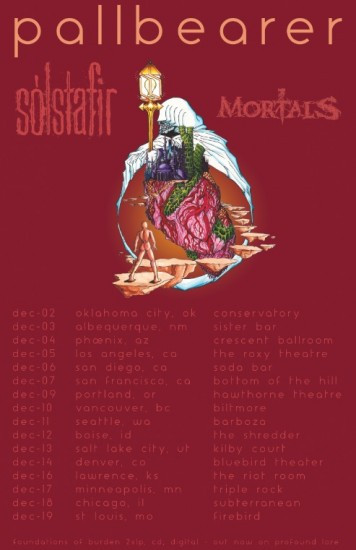 I’ve collected a bunch of new things I want to write about since the last round-up, but the old fucking day job isn’t going to let me do that at the moment. So I’m picking this one thing to write about, because I nearly fell out of my chair when I saw it.

The news is that Little Rock’s Pallbearer, Iceland’s Sólstafir, and Brooklyn’s Mortals will be touring the U.S. West Coast and certain parts of the country’s midsection together beginning on December 2. (There’s also a Vancouver date on the schedule.)

In the opinion of your humble editor, these three bands are collectively responsible for three of the year’s best albums: Foundations of Burden, Ótta, and Cursed To See the Future, respectively. The chance to see them perform together on one show is a chance not to be missed.

This is especially exciting for those of us on the West Coast because I don’t think either Sólstafir or Mortals have previously performed outside the East Coast.

Of course, I’m even more especially excited because the bands are playing in Seattle at Barboza. As one of my friends remarked when he saw that listing, “Barboza?!? Do they realize that room is about the size of my kitchen???” To which I replied, “Don’t tell them!” And of course there’s no way they’ll find out because this conversation is completely private and top secret.

How about some music to celebrate the good news?

9 Responses to “TOURISM: PALLBEARER, SÓLSTAFIR, AND MORTALS WILL TOUR TOGETHER THIS DECEMBER”