Today we bring you the premiere of a song by Nightbringer from their fourth album Ego Dominus Tuus (I am your Lord).

The song can be understood and appreciated on many levels. Standing alone, as you will hear, it’s tremendously powerful. Yet it’s also the final track (and the longest) on a 10-track album that’s more than 70 minutes in length, the culmination of an intense listening experience that’s not merely powerful but overpowering. It brings to a dramatic close a work whose spiritual intent would be manifest even if you knew nothing of the lyrics: It is prayer, it is worship, it is exaltation. It’s a declaration of belief, a proclamation of fealty, a passionate expression of yearning, and an offering to Lucifer on a pyre of flames.

Ego Dominus Tuus sounds like a majestic black metal opera. It’s grandiose and bombastic, with an orchestral quality created not only by the soul-stirring riffs but also by the effective use of keyboards, and there is a narrative quality in the movement of the songs that bespeaks a story being told (even though the lyrics don’t form a continuous narrative). The enormously expressive vocals sometimes sound like exchanges between different characters, each of them driven by fervent and usually fierce emotions — sometimes to the point of madness — as they are buffeted by the tumult of life-shaking occurrences. The music storms and subsides, as if turning points have been reached as the story moves toward its inevitable climax.

As you listen you can imagine the unfolding of transformative events, from the stately processional of an infernal coronation, to the agonies of torture, to the conflagration of war. At the end, you feel drained and breathless. 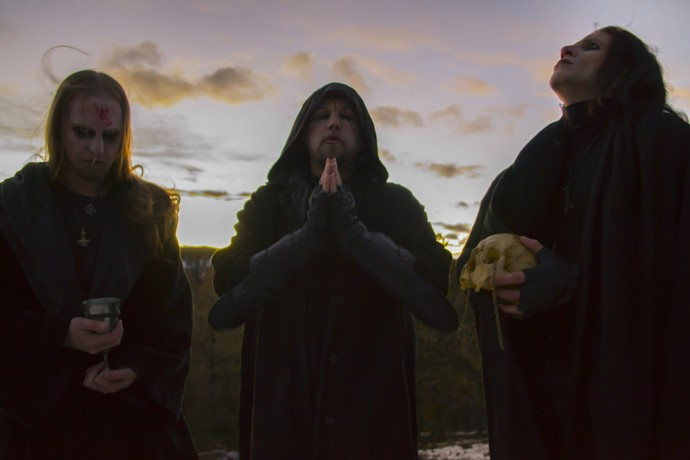 Perhaps the most remarkable thing about this remarkable album is that Nightbringer achieve this ceaselessly dramatic, larger-than-life atmosphere over the course of more than an hour without ever losing their iron grip on the listener’s attention. The album is extravagant without being eye-rolling, theatrical without losing its integrity, and for anyone who might be stifling a yawn at my use of the word “opera”, don’t get the wrong idea: This is ferocious and sometimes genuinely terrifying music. Even when the album drifts into meditative reveries, as in the dark ambient track “Call of the Exile” (composed and performed in collaboration with H. MacFarlane of Funerary Call), the effect is hypnotic — not so much a relief from the intensity of the experience as a change in its emotional timbre.

The instrumental performances are exceptional, perhaps especially the often jaw-dropping performance by new drummer Menthor (Enthroned, Lvcifyre, Necrosadist), and the varied vocals (with contributions by six different men) are riveting — at times during the track you’re about to hear, for example, they sound like someone being torn apart with talons or burned alive by sulfurous flame. All these aspects of the music are integral to the album’s success as a vital immersive experience, but at the core of its attraction are a sequence of keyboard-enhanced guitar melodies traced by writhing, razor-edged riffs that exert a magnetic hold on the mind.

There’s a lot to take in on this album; just listening to it requires a measure of fortitude and commitment rivaling the devotion that Nightbringer brought to its creation. Ego Dominus Tuus is dense, complex, and despite the presence of dark ambient interludes, almost unrelentingly intense. It’s a unique album that has earned its place on anyone’s list of the year’s best black metal, and it’s the high water mark of a band who are uncompromising in their dedication to a dark vision. In the words of the album’s penultimate track, “Salvation Is the Son of Leviathan”:

In final preparation for the song we’re premiering, here’s a statement about it by guitarist/bassist/vocalist Naas Alcameth:

“The Otherness of Being” speaks of the longing for union with one’s own higher daimon, an aspect of-self that is paradoxically one’s “otherness”. It speaks of being and non-being and approaching via incubation and dreams the cross roads in the underworld where one can come to know and to be one’s “otherness”, the shadow self, free within the “eternal now” outside of time and circumstance. The longing for this union is the heart of the melancholia, both gift and burden.

Ego Dominus Tuus will be released by Season of Mist in North America on September 30 and can be pre-ordered at this location. Nightbringer’s Facebook page is here.

7 Responses to “AN NCS PREMIERE: NIGHTBRINGER — “THE OTHERNESS OF BEING” (AND A REVIEW OF “EGO DOMINUS TUUS”)”