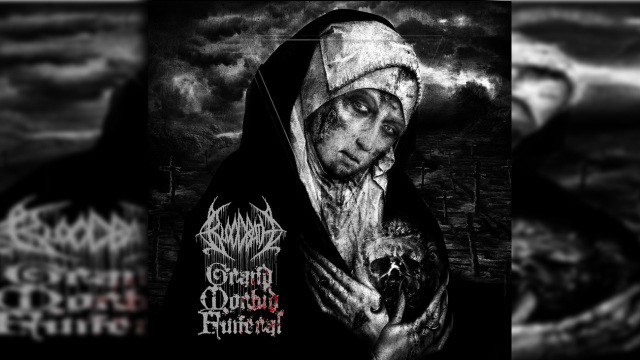 We have three song premieres coming your way on the site today, and I’m busy getting them ready to roll out, but I decided I needed to take a break for this one piece of news (published by Metal Hammer) to which my comrade Andy Synn just alerted me. Because it relates to the new album by Bloodbath.

First, they haven’t yet announced who will be the new vocalist in place of Mikael Åkerfeldt, so don’t bother asking. However, they have announced that the name will be revealed on September 16 via Metal Hammer. I already made my guess back in February (here).

Second, the name of the new album was disclosed today — Grand Morbid Funeral. It sounds like a grand name.

Third, the cover art was revealed — you can glimpse it above.

Fourth, it will be released by Peaceville Records on November 17.

He says: “We’re proud of all these different styled releases and we loved doing each and every one of them, but the objective was never to settle with a certain style, so our time has come to shift once more.

“It was already decided right after the last album that the next record would not become The Fathomless Mastery part two, but in certain aspects it would actually become its antithesis.

“So prepare for an ultimate blueprint of destructive, raw, heavy, organic, and sludgy death metal.”

Yes, titillating. Watch this space (or this one) for further Bloodbath revelations.