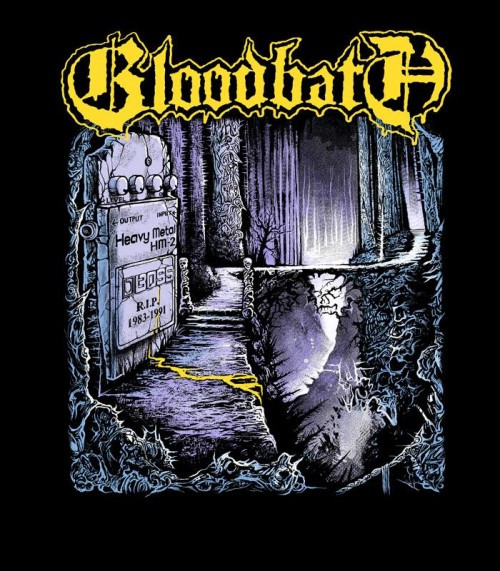 Are you sitting down?  You should sit down before reading further.  Sweden’s revered Bloodbath added a note on their Facebook page earlier this morning. I’ll share it at the end of this post. In a nutshell, it indicates that Bloodbath have written 10 new songs and will begin the recording process next month. And that should mean we will have a new Bloodbath album in 2014, the first one since 2008’s The Fathomless Mastery.

Based on the note, it’s apparent that there will also be a new vocalist on this album — one who is neither Mikael Åkerfeldt nor Peter Tägtgren. The Facebook note provides clues to the new vocalist’s year of birth by listing a string of deadly disasters, ending with the statement, “The new singer for Bloodbath is born. Oh dear”.

To save you a bit of time, all of the listed disasters occurred in 1971. To save you a further bit of time, I’ve listed after the jump the names of some vocalists born in 1971, identified through my own half-assed research. I will say that the most likely candidate from the names I’ve found is Jörgen Sandström — who is currently the vocalist for my beloved Torture Division and also the vocalist/bassist for The Project Hate MCMXCIX (he also provided vocals, bass, and guitar for Grave on their first three albums and also played bass with Entombed from 1997-2004).

If you’re unfamiliar with Mr. Sandstrom’s vocal work, you can get a taste by listening to the Torture Division song that I picked as one of 2013’s Most Infectious Extreme Metal Songs:

In my humble opinion, Jörgen Sandström would be a great choice. Here are the names I found of other vocalists born in 1971 (feel free to chime in if you discover others):

Okay, here’s the note that Bloodbath posted on Facebook:

“UGHH! HEEEY! I SAID HEY! We got 10 songs down and we start recording drums next month!!! Still curious who’s gonna sing on this one? Well, we’ll leave you with these disasters to see if any of you smart-azzez can figure it out

Jim Morrison, lead singer of The Doors is found dead in his bathtub in Paris, France.

A stairway crush as crowds leave the Rangers vs. Celtic football match in Glasgow, results in 66 deaths.

A fire in a mental hospital at Burghölzli, Switzerland, kills 28 people.

A landslide at Chungar, Peru crashes into Lake Yanahuani, killing 200.

The new singer for Bloodbath is born. Oh dear.”

36 Responses to “A NEW BLOODBATH ALBUM! (AND A MYSTERIOUS NEW VOCALIST)”