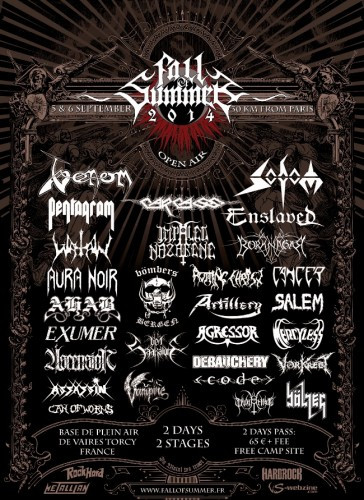 (Chicago-based NCS supporter and occasional scribe Leperkahn found himself in Paris just in time to catch part of the first Fall of Summer Open Air festival and provided us this report.)

As previously stated, my arse was lucky enough to be in Paris at the time set for the inaugural Fall of Summer Open Air. This new festival took place in Torcy, which is only a few kilometers outside of Paris, and accessible by a short 15-20 minute train ride from one of the downtown stations. Though I can’t speak from experience, this strikes me as a somewhat unique feature among most European festivals, which often require you to go much further away from such a large metropolitan area as Paris (or London or Berlin, for example). This also made my detour to the festival a plausible idea once I learned that schedules matched up – a 2-3 hour train or drive wouldn’t have been feasible given my schedule with school.

Anyway, enough about my boring details. Long story short, getting from my dorm to the campsite and festival was surprisingly easy, and provided one entirely unexpected surprise.

After I arrived at the Torcy train station, I had to take a bus to get a little closer to the site. Also on the same bus over was none other than Attila Csihar, of legendary black metal band Mayhem. In a moment that should probably have revoked my metal cred eternally, I didn’t recognize him at all, and only learned who he was after someone asked how his band was doing (which I learned was Mayhem) and then again when yet another person positively identified him as Attila. Regardless, he was a pretty nice guy (and a fast walker – I probably made the trek to the other side of the lake twice as fast by trying to keep up with him). 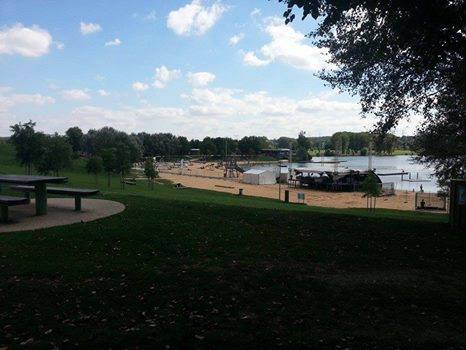 This was all happening as Rotting Christ were performing (I missed all who went before them, including, much to my chagrin, the inimitable Bölzer). Despite my near-running pace, I ended up seeing their set (roughly half of it, I think) as I forged ahead to the performance, and only made it inside the fest partway through Aura Noir’s blistering set of seething blackened thrash. Regardless, they were still a great first impression of the fest for me, leaving me a bit dazed from sheer volume and force after only one band.

After Aura Noir finished, I headed over to meet up with an NCS reader I had met just a few weeks ago, who I’ll refer to here by his commenter name nilamarthion, and his girlfriend. He was nice enough to treat me to a beer, which I enjoyed over Borknagar’s set on the smaller Sanctuary stage. I wasn’t as familiar with Borknagar as I was with some of the other bands, but they provided a nice, folky take on black metal that contrasted well with the thrashy take Aura Noir had previously displayed.

The three of us then trekked back over the Blackwaters stage to catch the legendary Venom, with a wonderful spiced wine nilamarthion found as an accompaniment. I’ve heard tell of this version of Venom not always performing up to snuff, but they put on a ravishing performance here, leading off with genre-starter “Black Metal” before running through a flurry of tracks from across their discography, concluding with an encore of “Witching Hour”. Cronos thrummed the bass with gusto as he croaked out the vile verses of the Venom canon, with guitarist Rage, and especially drummer Danté, providing a rock-solid backbone and darkly anthemic melodies.

It was either during Impaled Nazarene’s set (or Borknagar’s, the band before them on the Sanctuary stage – can’t recall which) that I ventured to grab a sandwich over at the “food court”, the first nosh I’d had in perhaps 6 or 7 hours. It was a solid sandwich, and indicative of what I thought to be the generally great food and drink available at the fest.

Impaled Nazarene, in the meantime, hit me like a freight train loaded with dynamite. They displayed a palpable excitement – you could tell that they were delighted to play their brand of Finnish OSDM to the masses at FOS. We, in turn, were delighted to take it in. If they had one downside, it was that they were wedged in between Venom and Carcass on the running order, which in comparison made their set seem not as great (though it was still fantastic, especially when considered as its own stand-alone performance).

As hinted, the next band to take the stage was Carcass. My incredibly bad luck has meant that I’ve still never seen Carcass stateside, and their late addition to the bill (after I had already pretty much committed to coming to and covering FOS) was an unexpected miracle, as far as I’m concerned. Their set did not fail my colossal expectations, and in fact may well have been my favorite of the fest.

They played a pretty even amount of songs from Symphonies, Necroticism, and Heartwork, with a few more from their newest offering Surgical Steel. “Incarnated Solvent Abuse” had my fatigued arse moshing for the first and only time of the fest, while I generally killed brain cells headbanging along to Jeff Walker’s heady lyrical roars, Dan Wilding’s thundering skins (very much holding up the legacy of Ken Owen), and Ben Ash and Bill Steer’s searing, epic guitarmonies and pandemic-ly infectious riffs.

On record, Heartwork Pt. 2 (a.k.a. Surgical Steel) seemed to me like a minor letdown, not for any of the songs, but because they sounded so much like Heartwork outtakes, whereas every previous Carcass album had sounded radically different from the others, constantly exploring different musical spheres. In a live setting, however, this largely didn’t matter, and simply allowed for more awesome Heartwork-ness to populate their setlist, with more awesome hooks and guitarmonies (I say this as someone who still sees Necroticism as Carcass’s peak thus far, but places Heartwork just behind it in the “pecking order” of sorts).

My mind reeling from the religious experience that was my first Carcass concert (sleep deprivation may also have contributed to such reeling), I ran over to pick up a Carcass shirt and a sweater from Vampire, the next band to go on. I had stupidly not thought to bring a sweater along, and thus by this point (roughly 2 AM) was possibly nearing the onset of hypothermia (note to future festival goers: ALWAYS BRING A JACKET TO AN OPEN AIR FESTIVAL, EVEN IF YOU DON’T BRING ONE TO NORMAL SHOWS).

Nilamarthion and I then caught Vampire on the Sancutary stage, the last band to play that night. Having liked the few songs I’d heard from them before, I was pretty stoked for their set, and was not disappointed. Shrouded in fog, they tore through a set of mystical death metal, old school in character, but with a darkly esoteric atmosphere draped over it. The set convinced me to grab a copy of their debut album on my way out to nilamarthion’s tent, in which he was kind enough to lend me a sleeping bag.

Exhausted, I was out pretty quickly after that, lulled to sleep by the sound of mosquitoes eating me alive, and fellow metalheads being merry in the company of one another.

Sadly, I had to head back to Paris the following morning, and a one-two punch of school stuff and a burgeoning chest cold prevented me from attending the second day of the festival. Overall, though, I had a fantastic time there, absorbing not only the sets of each band I got to see, but the general “metal holiday” atmosphere that helps explain why people travel so far for open air fests.

Especially for being such a new festival, all of the logistics seemed really well thought-out, and moved just as smoothly as any other more experienced fest or concert would have. Quite a few of the bands even commented that they had been treated better by the staff of Fall of Summer than by some other more famous fests, such as Hellfest (though they said this while onstage, so perhaps a grain of salt should be taken with the digs at Hellfest).

I’d like to thank Christophe Sousa, Sarah Karazoff, and everyone at Dooweet for helping promote this thing, and to Jessica Rozanes and everyone else who helped organize the festival as a whole. I’d also like to give a special merci beaucoup to nilamarthion and his girlfriend for keeping me company, for housing me for the night, and for treating me to some beer and wine.

My time at Fall of Summer wouldn’t have been the same without any of the people mentioned above, and they’re a large reason why I badly want to make it out to a future edition of the Fall of Summer Open Air. And in the name of all things holy (and unholy), if you have a chance to attend this fest next year, or in years to come, DO IT. You’ll have a fun time guaranteed, and you might just meet a metal legend on the bus over. 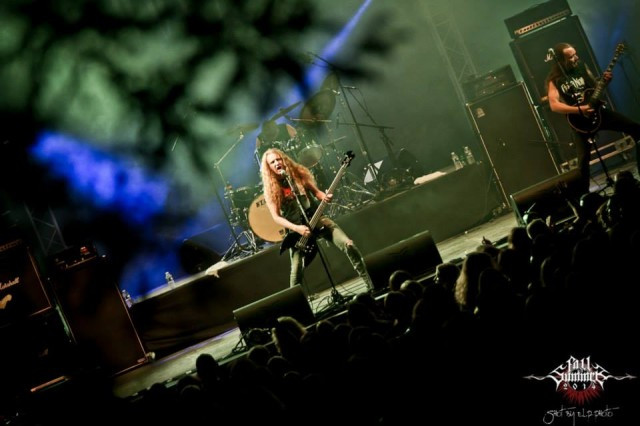 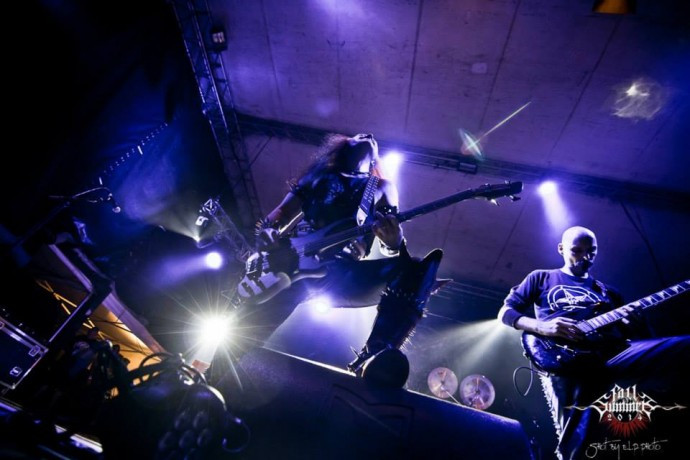 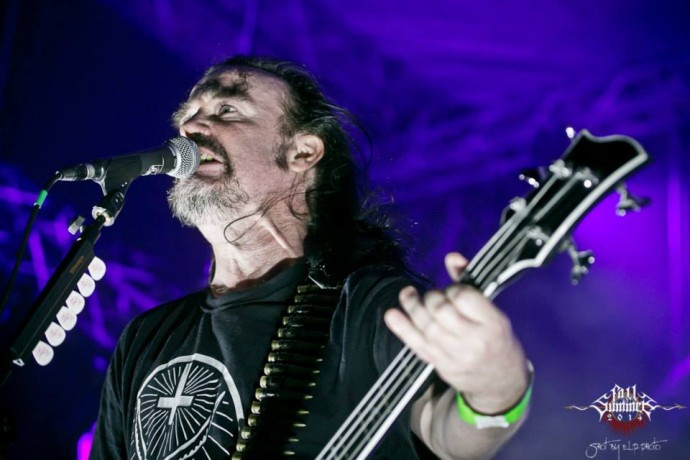 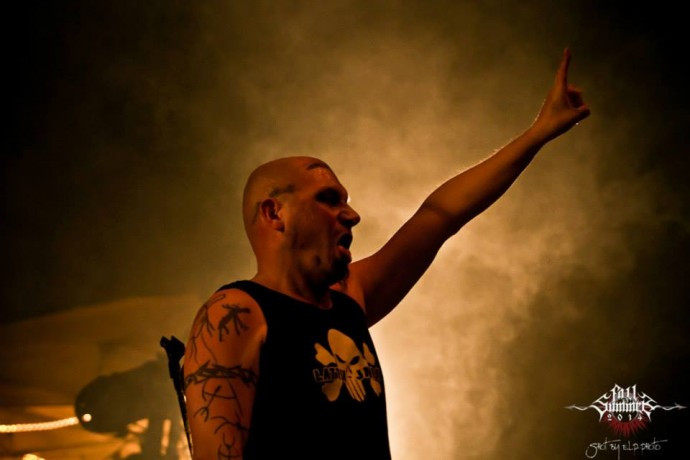 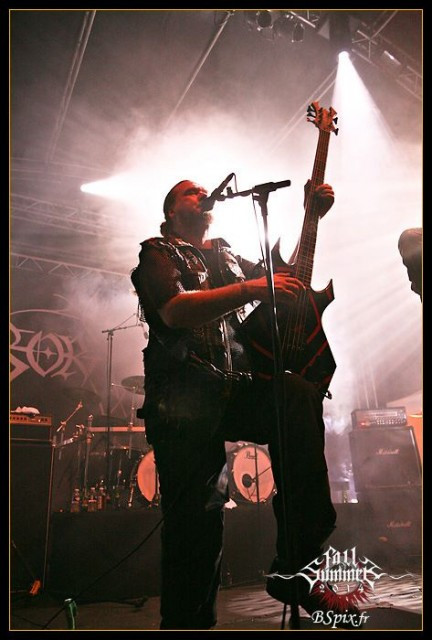 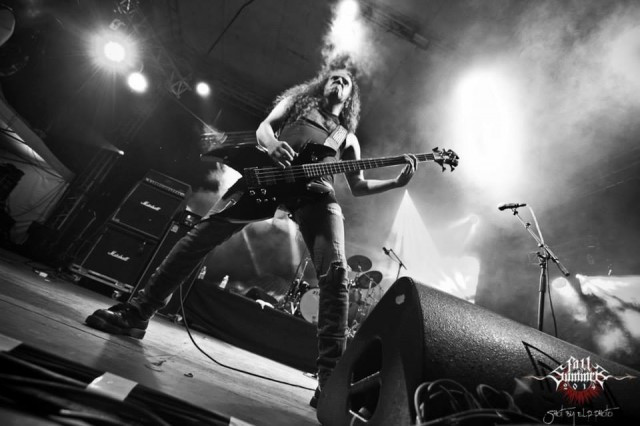 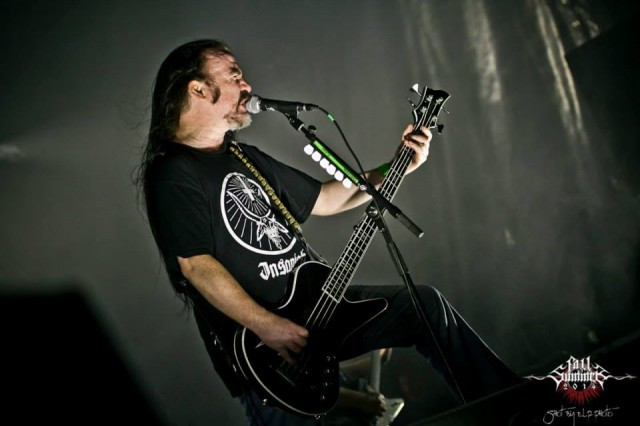 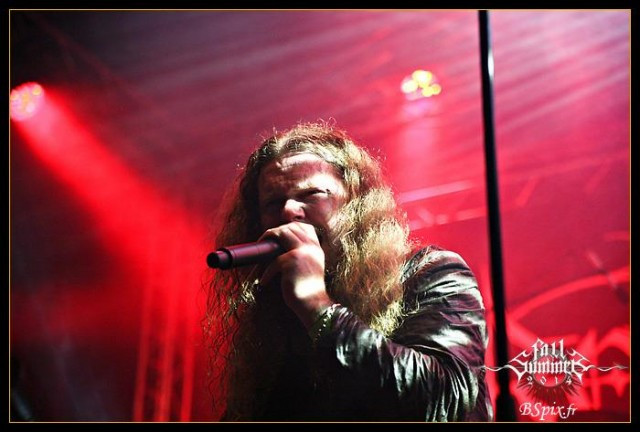 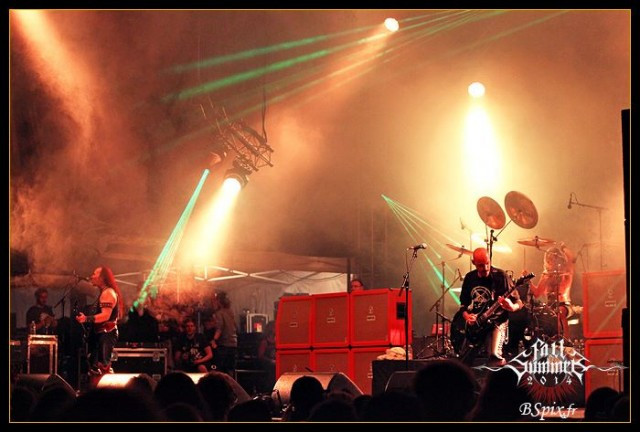 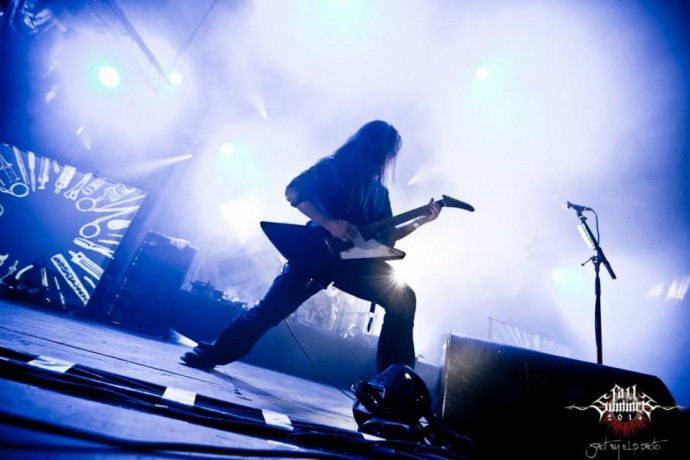 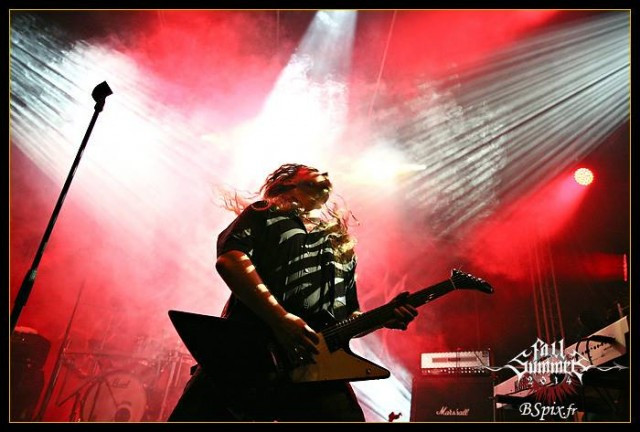 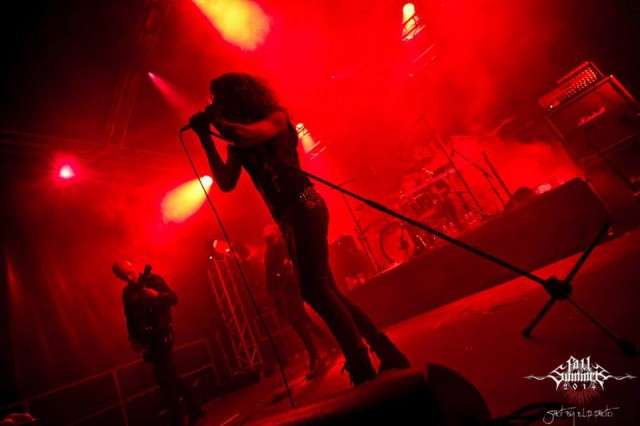 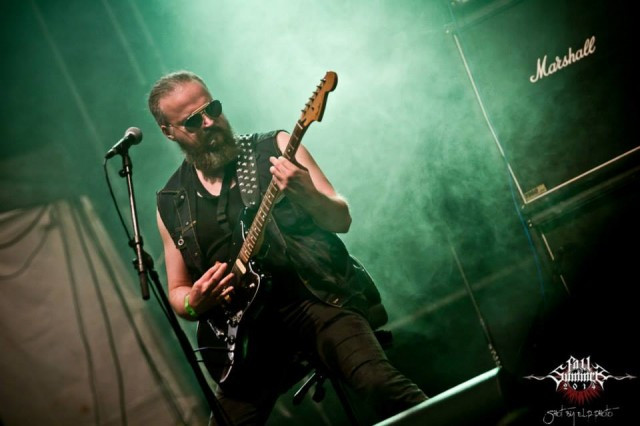 22 Responses to “LEPERKAHN WENT TO A FESTIVAL: A REPORT FROM THE INAUGURAL “FALL OF SUMMER OPEN AIR””