I sometimes play fast and loose with that “Shades of Black” title, but this time it genuinely fits the music I’ve collected here. The song streams represent many different shades and phases of black metal, and regardless of your preferences within the genre, I suspect you will find something to like before you reach the end. Of course, I like all of it.

The long-running Greek black metal band Varathron will be releasing their fifth album, Untrodden Corridors of Hades, later this fall.  It comes five years after their last full-length, but based on the strength of the new album’s first advance track, this is one of those cases where I’m inclined to say, “It was worth the wait!”

“Realm of the Obscure” is thoroughly galvanizing, a non-stop rush of multi-faceted riffs that writhe like serpents, stab like knives, and hammer like mallet blows. The acrobatic and often pyrotechnic drumwork is equally varied and matches up beautifully with the varied movements of this long song, and the vocals are thoroughly ravenous. It’s the kind of music that’s voracious and malignant but with a highly seductive melody and an aura of imperial might. Really excellent.

Untrodden Corridors of Hades will be released by Agonia Records on November 21 in Europe and December 9 in North America. It can be pre-ordered here.

I don’t have anything more to say about the stunning new album by Nightbringer (Ego Dominus Tuus) that I didn’t say in my review of the album (here). What I do have to say is that you can now listen to the entire album, because yesterday Decibel premiered a full stream along with an interview of the band’s Naas Alcameth. Listen and read here (the album will be released September 30 by Season of Mist):

We’ve written quote a lot about Massive Cauldron of Chaos, the new album by Norway’s 1349 — I think we’ve featured every advance track that has appeared from the album so far, and I believe we’ll have a review as well. But as in the case of Nightbringer, all I really want to do now is tell you that the entire album became available for streaming today. It’s really good, and you should check it out if you’re a fan of thrashing black metal. Here’s where you can do that:

In the case of this one-woman band, I’ve been guilty of doing something we almost never do at NCS — engaging in gossip and speculation about the person behind the band instead of just focusing on the music. It doesn’t matter that in that early August post, we happened to accurately report the then-undisclosed identity of the Danish woman who is Myrkur. At least at this site, we should be reflecting on the music, and whether it is good, instead of whether the music’s creator has sufficient kvlt credentials to be making black metal.

If someone pretends to be something they’re not (such as people who pretend to be genuine satanists when it’s all really for show), I guess that makes them fair game for internet tirades, but that doesn’t seem to be what happened here. Granted, from a PR perspective it might have been better to be upfront about who she was from the outset — though I suspect the kvlt police would have jumped on her just as vehemently.

But none of this controversy changes what we hear on Myrkur’s debut album. And what I hear is something I really enjoy. The latest reminder of the music came yesterday through the premiere of a music video for the song “Nattens Barn”(“Night’s Child”). I’ve already written about the song:

Myrkur’s pure a cappella voice, layered to create the sound of a choir, is immediately arresting, and so are the wolfish, ripping howls that come forth later. The powerful waves of dark guitar melody that roll in like a storm front are hugely appealing, and so is the combination of jagged, jabbing riffs and rippling tremolo streamers that shimmer above them like an aurora borealis.

The video was shot in Nordsjælland, Denmark, and it suits the inspiration that Myrkur says drove her to create the music. You can watch it below.

Ashes is a UK band that appears to have begun as a one-man project of a man named Davidian, and now again consists of Davidian alone after a period in which another person carried on the Ashes name. The new Ashes album (the fourth one) is named Hrēow (old English for grief, sadness), and it was released yesterday by Candlelight Records. I was unfamiliar with the band’s previous releases and so far have only managed to listen to two songs from the new album — the opening track, “Shifting Mountains”, and the second one, “Stone Spiral” (these are the only songs that are streaming at the moment) — but those two are very good, and reason enough to check out the entire album.

The music is dark, atmospheric, and quite beautiful in its own bleak way. Moving dynamically from crashing waves of passionate melody to soft, rain-drenched acoustic interludes to grinding riffs and agonized shrieks, the songs are emotionally intense and highly memorable. It’s a listening experience that’s quite capable of taking you out of yourself and plunging you into another world, where storm-swept vistas of forest and mountains wait around every turn of the path.

Hrēow is available on Bandcamp, and you can stream the two songs below. 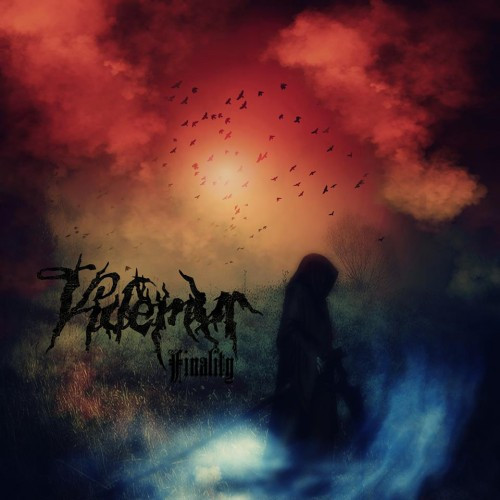 Videmur are a two-man band consisting of Andreas Stieglitz (Belgium), who performs all the instruments, and vocalist/lyricist Brandon Solis (Puerto Rico). They released their debut album, Finality, last month and I found out about it yesterday through a recommendation from Sean Golyer. Especially after catching a glimpse of Finality’s glorious cover art by Lord Hellfire, I decided to put aside what I was doing and start listening.

As in the case of the Ashes album discussed above, I’ve only managed to listen to the album’s first two tracks, “Whispers From A Time Forgotten” and “The Sound of Emptiness”, both of which top the 10-minute mark. And as in the case of Ashes, these songs are so appealing that the entire album deserves a close listen.

The absolutely wretched, throat-scraping shrieks and howls of the vocalist contrast with instrumental music that’s quite attractive, though quite melancholy in its emotional resonance — with only brief moments of raking riffs and blasting drums. Mainly slow and atmospheric, the songs make a virtue of sorrow and depression.