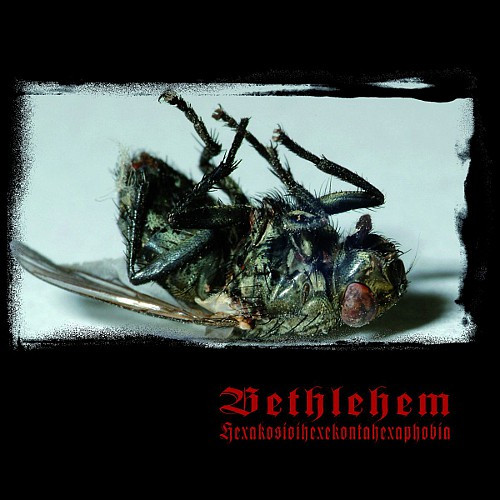 As explained here, I’m taking a 10-day hiatus from searching for and writing about new song and video premieres, in order to make time for reviewing some albums I absolutely need to say something about. Before doing that, however, here’s one last batch of new things I found over the last couple of days that I thought were worth sharing.

Germany’s Bethlehem, whose debut album may or may not be responsible for that amorphous genre label “dark metal”, have a new song up for streaming, the name of which is “Ein Kettenwolf greint 13:11-18”. All I really have to say about this depressive ballad is that I’d listen to more rock music if it sounded like this. Warning: clean singing to come…

The song will appear on the band’s sixth album Hexakosioihexekontahexaphobia (fear of the number 666), which is their first in about five years. It will be released by Prophecy Productions on Oct 10 (Oct 14 in the U.S.) and is available for order here. 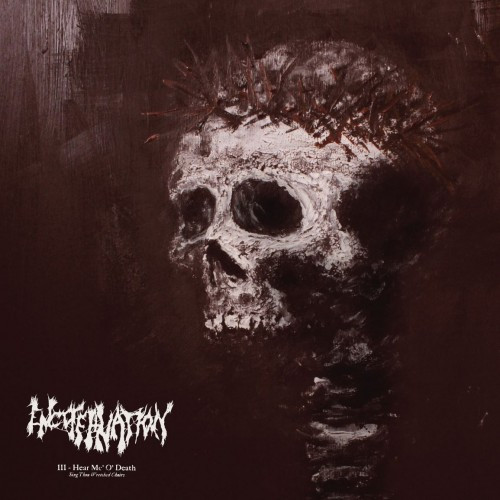 Encoffination’s third album, III – Hear Me, O’ Death (Sing Thou Wretched Choirs), will be released by Selfmadegod Records on October 21. Yesterday DECIBEL premiered the first full song from the album (which follows an intro track). Fittingly, its name is “Charnel Bowels of a Putrescent Earth”, because it doesn’t take much imagination to feel yourself entering such a place as you listen to the song.

Slow, grinding, hazed with distortion, with a thick miasma of dread oozing from every pore, the song fulfills the objective of the band’s vocalist/guitarist Ghoat as quoted in that DECIBEL premiere: “I want each album to grab you by the throat and sit on your chest from the first note… to suffocate and not let up. We had to keep the theme going…”  Doom on.

The album can be pre-ordered here or here.

Okay, it’s time to get the blood pumping again now that it has been congealed by that last song.

Not long ago I reported on the coming release of Með vættum, the new album by Iceland’s Skálmöld, which I’ve been most excited to hear. Yesterday the first single from the album, “Að hausti”, became available for listening at various sites around the world. If you can remain still during the song, I’ll be very surprised. It rocks like a mead-fueled Viking celebration, with raw, gravel-throated howls and shrill shrieks summoning you to the party. You can imagine things will get out of hand in short order. (Knowing Skálmöld, they’re undoubtedly singing about something more epic than a Viking party, but that’s what I’m imagining, since my Icelandic language skills are a bit non-existent.)

Með vættum will be released on November 25th in the U.S. by Napalm Records (and on other dates in November and December elsewhere around the globe). To listen to the song, go here. Damn, this is so catchy. 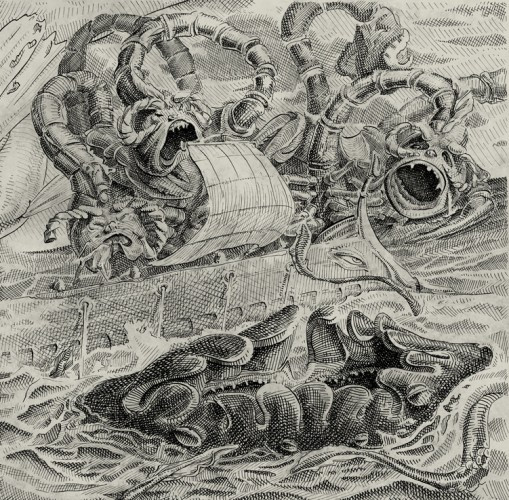 Yesterday the Elemental Nightmares project began shipping out the third of seven vinyl installment in the series, and the songs on this latest collection were simultaneously made available on Bandcamp. In this collection are tunes by Eventide (Sweden), Septekh (Sweden), Eternal Helcaraxe (Ireland), and Mondvollond (The Netherlands) (whose song ” I previously wrote about here).

The music ranges (respectively) from thrashing/galloping melodic death metal (leavened with beautiful acoustic interludes and dynamic guitar harmonies), to swirling/swilling/rocking/dirty death/thrash, to dramatic but warlike black metal with a mythic atmosphere, to head-spinning, skull-clobbering, progressively inclined black metal from a band who will be sorely missed.

For more info about how to jump on this bandwagon, visit one of the following links: