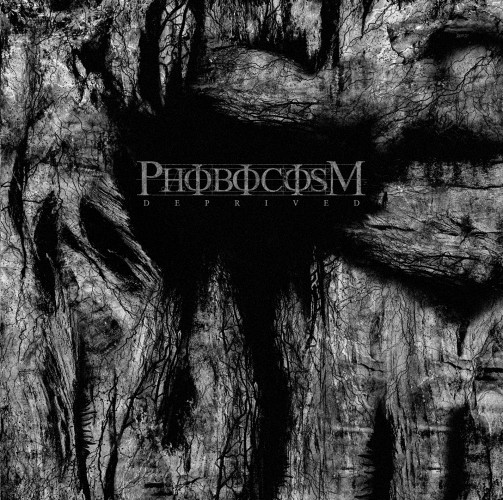 (Austin Weber reviews the new album by Phobocosm from Montreal.)

A lot of modern death metal is shiny, flashy, and in addition, purely cutthroat. Well, the Montreal-based group Phobocosm are nothing like that. They are relentlessly ugly and unforgiving, often content to stew in misery at a slower pace, entrenched in massive, sickening riffs that churn bowels and cause minds to enter a state of hopeless insanity. If a cutthroat death metal record feels like a physical assault, then consider Phobocosm masters of taking that assault directly into your brain, feeding you clouded questions that don’t lead to any answers, submerging you in a sadness and longing that reeks of perversion. Deprived offers an evil and different take on the death metal sound. Yes, there is plenty of  lively double-bass, and the album has its frenzied moments, but often this is a skulking, wounded beast — preaching a horror beyond gore, beyond death.

An eerie Immolation and Incantation influence is clear — from the riffs to the grooves to the structuring. However, Phobocosm are far from wholly a clone of either group. Besides those two points of reference, the music sometimes calls to mind the approach of Ulcerate, embracing and reflecting in atmospheric reverberations, sometimes by themselves and at other times mixed within the band’s full-throttle moments. The back and forth sway of the songs on Deprived is one of its greatest strengths, frequently manifesting a battle between faster and lurching tempos.

At still other moments on Deprived a black metal undercurrent is injected into the mix and further poisons the music’s already pitch-black feel. In this respect, the album is reminiscent of Deathspell Omega or Mitochondrion, though the blackened coloring occurs largely within a death metal framework overall. 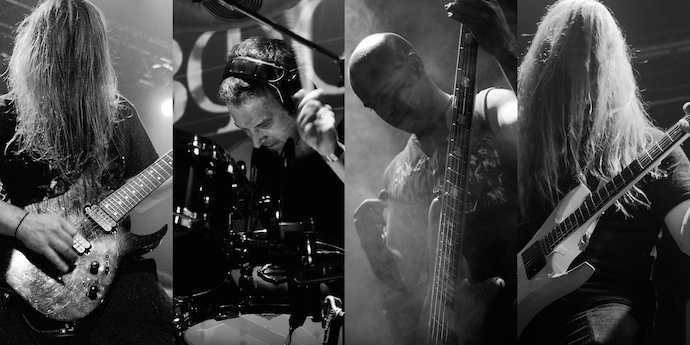 Phobocosm have a lumbering penchant for oppressive, burrowing builds interwoven with their filth-riddled savagery, exemplified on tracks like “Solar Storm”, whose second half trudges along at a menacing snail’s pace. The track indifferently vomits its weight into your ears, burdening you with sorrow and sickness. Meanwhile, tracks like “Awaken Unconscious” heave at a titanic, faster pace, offset midway by atmospheric backing sirens of pestilential melody, dispersing terror of an apocalyptic variety.

Album closer  “Forever In Doubt” writhes with a black metal ferocity amidst its lengthy 11-minute run-time. It stands as a colossal death metal opus and a fitting finale. The song title itself, “Forever In Doubt”, is certainly one to which I and many others can relate as human beings with a tendency to doubt and overthink, sometimes leading to a perpetual state of uncertainty and questioning regarding a multiplicity of issues.

Excluding the manner in which brutal or slam death metal is referred to as “disgusting”, Phobocosm far more accurately reflect real feelings of disgust and misanthropy. There’s nothing pleasant to hang on to on Deprived, no catchy melodies, no pretty solos to be found, and few if any breaks from its squalid entanglement. This is one of the harshest slabs of death metal I’ve heard in awhile, one whose entire impact captures the imagination of being clamped in a vice grip that tightens until all life bursts from it into an abstract kaleidoscope of flesh and blood no longer recognizable as human.

Deprived does something to you that many other albums don’t: It haunts you. Just a forewarning before hitting play that you are entering the byproduct of severely disturbed minds, and yet the portrait it paints accurately reflects the worst feelings and dimensions of life as we know it to to so cruelly be. This is maddening music for mad minds. If contemplating the psychological horrors of reality in aural form is your thing, then Phobocosm is the perfect anti-parasite parasite for you.

Deprived is being released today by Dark Descent. It was mixed and mastered by Colin Marston (Gorguts, Dysrhythmia, Krallice) and features artwork by Chimère Noire (Portal, Abyssal). The entire album can now be streamed below via Bandcamp, where it can also be ordered.