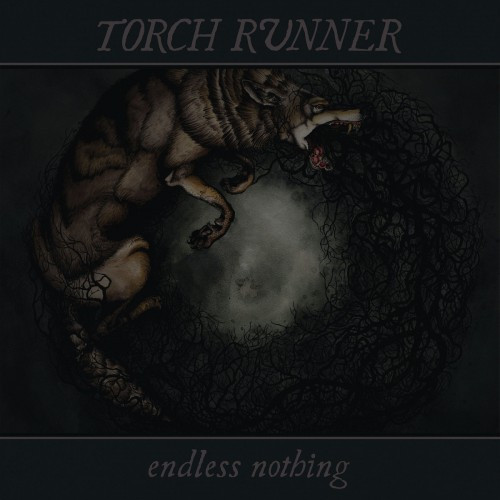 Endless Nothing is good for one thing and one thing only: Caving in your damned skull, crushing all of your vertebrae, spilling your guts, and setting them on fire. Or maybe that’s four things.

Thirteen songs, most of them short, all of them tremendously heavy and brutally destructive — that’s what the new second album by North Carolina’s Torch Runner delivers. The riffs alternately hammer like giant mallet blows or roar like smoking concrete saws, and at all times they vibrate with radioactive levels of distortion. The percussion follows the same kind of tag-team format — pounding with enough force to split asphalt or blasting away like heavy artillery.

And my god, the bass — the bass is absolutely staggering. You don’t believe me, just check out the opening minute of the album’s longest song, the catastrophically bleak “Circle of Shit”.

As you might expect if you’ve read this far, the vocals are shattering — the kind of shrieking that brings grown men to their knees begging for mercy (and a few roars that make me think of bears in a bad mood).

But I’ll tell you what, as violent and obliterating as the album is, the music compels a physical response –either headbanging like it’s the last chance you’ll get for that, or wanting to put someone in the hospital in a mosh pit — and just when you think everything is going to collapse in a pile of rubble, Torch Runner throw some chords at you that are so catchy you’ll actually remember them after you catch your breath.

This is a near-lethal overdose of grind and crust that’s one of the most pulverizing albums you’re likely to hear all year. It’s out now on Southern Lord — digital, CD, or vinyl, all of it available through the Bandcamp link below. An album stream follows the links. You can’t say I didn’t warn you.

4 Responses to “TORCH RUNNER: “ENDLESS NOTHING””