Bedřich Smetana was a Czech composer who pioneered the development of a musical style which became closely identified with his country’s aspirations to independent statehood. He is thus widely regarded in his homeland as the father of Czech music. Internationally he is best known for his opera The Bartered Bride; for the symphonic cycle Má vlast (“My Homeland”), which portrays the history, legends and landscape of the composer’s native land; and for his First String Quartet, From My Life.

“My Fatherland” is described as a cycle of six symphonic poems. Interestingly, according to the article quoted above, it was composed after illness had rendered Smetana completely deaf in both ears. The second part of the cycle is entitled “Vltava” and it was finished in late 1874. As the article explains, it was named for, and inspired by, “the river that runs through Prague towards its junction with the Elbe [and] is Smetana’s best-known and most internationally popular orchestral composition”.

And why, you may ask, am I writing about Smetana and “Vltava“? Because the Czech black metal band Cult of Fire have recorded a two-song EP dedicated to the composer and will be releasing it on 7″ vinyl through Iron Bonehead Productions on the 140th anniversary of Smetana’s completion of “Vltava“: December 8, 2014. This is the band’s fourth studio release overall, and thus it’s entitled Čtvrtá Symfonie Ohně (The Fourth Symphony of Fire), with cover art created by David Glomba. 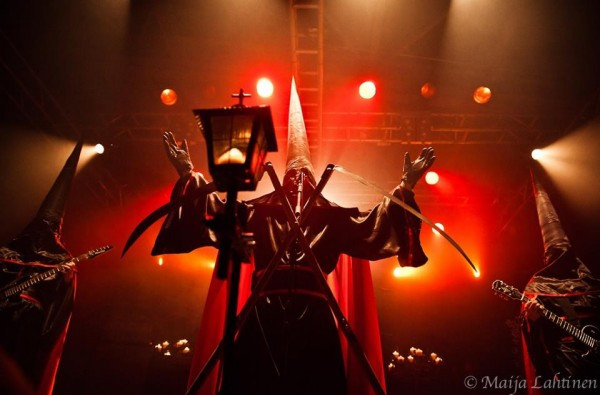 The band have explained that the EP was originally intended for release after their first album, 2012’s Triumvirát, but was delayed due to their “fascination with India”, which led them to write and record their second album — मृत्यु का तापसी अनुध्यान (“Ascetic Meditation of Death”) (reviewed here). The EP consists of two songs, named respectively for the Czech river Vltava and the Slovak river Váh.

There is indeed a symphonic air to the music, but not so much because of the presence of orchestral-style keyboards as because of the sweeping, dramatic atmosphere of the music. One of the few overtly orchestral references comes at the beginning of “Vltava, when the sound of timpani and darting strings (which might be created with a keyboard or a guitar) precede the appearance of heavy, slow riffs and then eventually a tornado of blasting drums and guitar distortion, which merge together into a raging storm of sound. That darting strings-like melody flashes throughout the song, often barely audible when the storm is at the peak of its fury — but still an electrifying presence.

“Váh” is, if anything, even more dramatic, building gradually from the sound of flowing water and slow reverberating guitar notes into a torrential flood of blasting percussion and tremolo’d chords. A high, transfixing guitar melody meanders through the shroud of holocaustal sound, eventually arcing skyward with a blood-pumping melody as the rhythm transforms into a kind of slow, stately march. As the song builds to a crescendo with thundering double-bass, an avalanche of tom rolls, and potent repeating riffs, the emotional intensity of the music swells gloriously, much like the final movement of a symphony. Fittingly, the sound of water that reappears at the end is the sound of nature’s power.

In a nutshell, Čtvrtá Symfonie Ohně is inspired and inspiring, both melodically resplendent and savagely powerful.

UPDATE: Below you can now listen to the first song on this EP, “Vltava”.

P.S. If you want to explore the evolution of Cult of Fire’s music, I discovered for the first time today that their 2011 debut EP 20:11 has been available for streaming on Bandcamp via Sarlacc Productions, who recently released it on tape — and sold it out during pre-order. I’ve put the link below, as well as an embed of the stream.