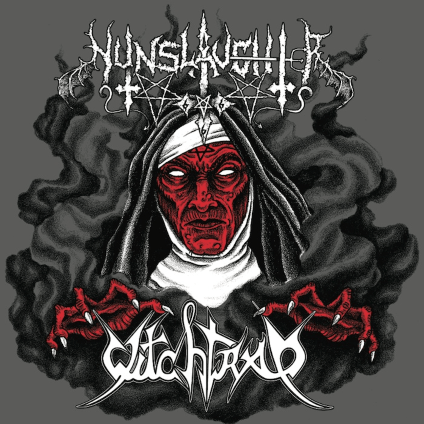 According to Metal-Archives, Cleveland-based Nunslaughter have released more than 140 recordings, only four of which have been full-length albums, the rest mostly consisting of splits, EPs, and live albums. Hells Headbangers is releasing two more splits this fall, and I spent some time with both of them this past weekend. I reviewed the first one, a split with Perversor, here.

In this second split, with Columbia’s Witchtrap, Nunslaughter spit their poison in Spanish for a change, with tracks named “La Ofrenda” and “Altar De La Muerta”. “La Ofrenda” is a meat-grinder on steroids, a venomous death metal romp with a breakdown guaranteed to produce sore-neck syndrome and thoroughly disgusting vocal filth. “Altar De La Muerta” is another jet-fueled riff-rampage that’s groovy as hell and never backs off the gas. Both songs will light a bonfire under your butt. 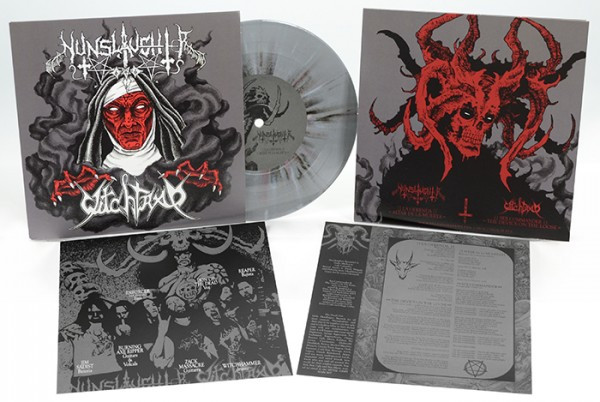 Witchtrap load in two songs to this abomination, “Sex Commander” and “The Devil’s On the Loose”. I wasn’t familiar with the band before hearing these two tracks, and have since learned that they’ve recorded three full-lengths, the last of which was 2012’s Vengeance Is My Name, plus an assortment of shorter releases going back to 1997.

After listening to this split about a half dozen times, I’ve had a barely contained desire to walk around yelling “I’m A Sex Commander!” with full-throated enthusiasm. Of course, I wouldn’t be fooling anyone, but “Sex Commander” is such a ridiculously catchy blast of old-school speed metal and thrash that it’s really hard to resist, and you can hear every word of the tongue-in-cheek lyrics. At least I think they’re tongue in cheek.

“The Devil’s On the Loose” starts in the slow and morbid lane, but then Witchtrap slam the pedal to the floor and it’s balls-to-the-wall again. Both songs include impressive spitfire soloing and sharp production values and a lot of high-voltage juice. It’s impossible not to have fun listening to these two marauding bits of mayhem.

The split can be ordered here:

Witchtrap uploaded excerpts from their two songs to YouTube, and you can check that out below these links. Sadly, I haven’t found streams of either of the Nunslaugher tracks.

2 Responses to “SHORT BUT SWEET: NUNSLAUGHTER AND WITCHTRAP (A SPLIT)”