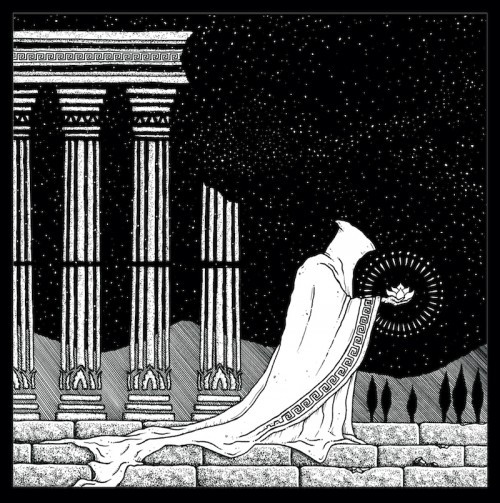 When someone describes an album by telling you that you’ve never heard anything like it before, you may greet such a claim with skepticism. So I’ll just say that I’ve never heard anything quite like Rervm before. It’s the debut album of a San Francisco band named Lotus Thief, and today we bring you the premiere of the album’s second track, “Miseras”.

Lotus Thief consists of two members, Bezaelith (Botanist, Mina Loy, The Night Falls) and Otrebor (Botanist, Ordo Obsidium). The fact that both have been involved in the unique music of Botanist may suggest certain musical associations, but Lotus Thief follows a different musical path, albeit one just as unusual.

“Miseras” crushes with a heavy bass beat and distorted chords coming down in a torrential pour, with cosmic ambient sounds swirling around the storming beat — and beautiful clean vocals, male and female, rising up as airy and soaring as the instrumentation is concrete heavy.

The music drives with power, but it’s driving the space lanes rather than any earthbound highway — a course that become unmistakably clear with three minutes left, when the pistons stop and the song glides like a satellite in orbit, a cosmic dream unfolding.

I’m not even going to try to classify the music in genre terms. When you hear it, maybe you’ll understand why. And it would be equally pointless to force the other songs into pigeonholes — they would wriggle free. You’ll see.

One more note about Rervm, as if the music itself weren’t interesting enough: It’s a translation-based retelling of De Rerum Natura (or “On the Nature of Things”) by the Roman poet and philosopher Titus Lucretius Carus, written in the 1st century BC. I think it’s worth quoting from the article on this work at The Font of All Human Knowledge, because it adds one more layer of richness to the music itself:

The poem, written in some 7,400 dactylic hexameters, is divided into six untitled books, and explores Epicurean physics through richly poetic language and metaphors. Lucretius presents the principles of atomism; the nature of the mind and soul; explanations of sensation and thought; the development of the world and its phenomena; and explains a variety of celestial and terrestrial phenomena. The universe described in the poem operates according to these physical principles, guided by fortuna, “chance,” and not the divine intervention of the traditional Roman deities.

Rervm will be released on November 28 by Svart Records on double-vinyl, CD, and digitally, and can be pre-ordered here. The first track from Rervm, “Aeternvs”, was previously released on Bandcamp, and I’ve included a stream of that song below our premiere. Enjoy…