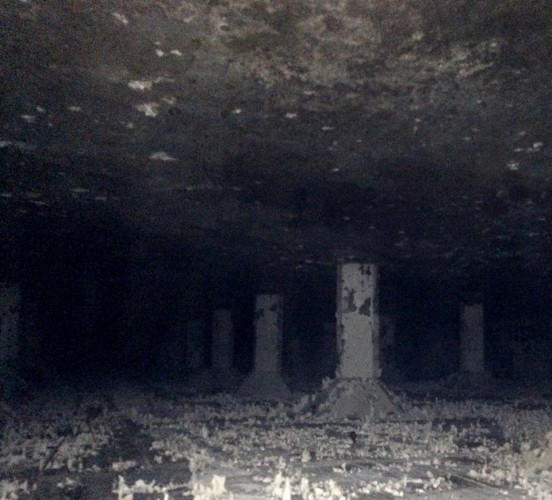 This is a prime example of an album that came out of nowhere, one that I easily could have overlooked, but that turns out to be one of the most surprising and enjoyable things I’ve heard in months. The album’s name is Vestige and it’s the debut work of a three-person Montréal black metal band name Basalte.

Vestige consists of three long songs (from 9 minutes to almost 17), “Mirage”, “Luminaire”, and “Obtuse”. They are guitar manifestos, strange journeys across distortion-shrouded alien soundscapes that sometimes seem like the eruption of volcanos on a Saturnian moon and then at other times shine like the Saturnian rings themselves, shimmering with the glint of sunlight on ice crystals. The drumming is just as unpredictable and just as transfixing, like a comet with a mind of its own that moves around and through the cosmic lightshow, heedless of the pull of gravity.

The pacing varies dramatically, changing gears at will. So does the volume; the music is tumultuous one moment, soft the next.  Beautiful, dreamlike melodies rise up out of nowhere and are just as suddenly drowned out by a slaughtering hailstorm of knife-edged riffs.

At the end of “Mirage”, feedback discordance blares over a drum solo that sounds like improvisational jazz. A rippling tremolo-picked melody radiates vibrantly in the back half of “Luminaire” and another one near the beginning of “Obtuse”, and both are layered with a creatively harmonious second guitar track. The mid-section of “Obtuse” sounds like a hive of insectile creatures engaged in feverish debate over matters of great if unintelligible import. Those are just a few examples of the surprises around every corner.

The vocals, when they appear (which isn’t often), sound like stricken yells or cavernous growls rather than typical black metal shrieks or rasps. There are also some clean vocals in the last track, singing what sounds like a lament. Why should they be any more predictable than anything else on Vestige?

By turns entrancing and disruptive, warlike and droning, progressive and experimental, this is a remarkably creative album loaded with remarkable instrumental performances. You can call it atmospheric black metal, but it’s not the atmosphere of Earth. More like methane clouds drifting above the nitrogen fog on Titan.

Oh hell, forget my metaphors, just listen to it!