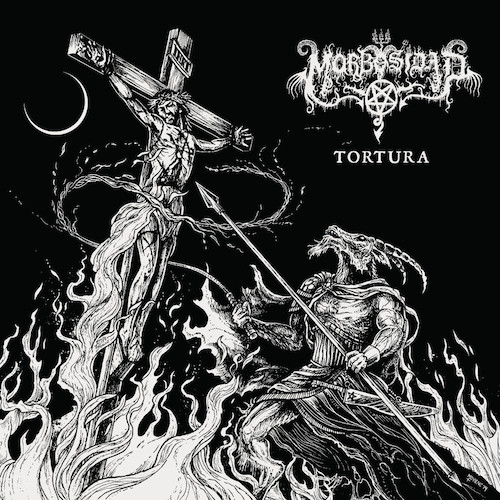 Morbosidad have been shaking the foundations of extreme metal since about 1993, releasing a host of splits and EPs as well as four albums. Their latest release, with a new lineup recruited by founding vocalist Tomas Stench, is a four-song EP named Tortura that will be released by Nuclear War Now! on December 15. On the final track, it features a guest appearance by Chris Reifert of Autopsy. It kicks all the asses.

That preceding paragraph appeared in my review of this EP, posted only yesterday. No music from the EP was publicly streaming when I posted the review, and so I requested the opportunity to share some of it with you — and my request was promptly granted: Today we bring you the premiere of the EP’s second track, “En Las Gallas Del Infierno”.

What I wrote about the EP holds true for this song —  it’s a jet-fueled, turbocharged, bat-winged, red-eyed race, from the machine-gun snare attack to the particle-accelerator fretboard assault. And the echoing vocals are thoroughly pestilential — a mix of tyrannical proclamations, ravenous howls, bile-drenched retches, and blood-spewing roars. As is true of the most lethal diseases, it’s also highly infectious.