While I was driving home from work today, two drops of rain hit my car. I know, because I counted them — which, given the current weather conditions trying to turn Sacramento into the Sahara desert via drought, means that I basically drove through a veritable hurricane. That, coupled with the hint of grey sky and the glorious ton of fog that blanketed the highway, pretty much signaled my seasonal shift in music reviewing. I’m probably not the only person in the world who does this (keeping in mind that six-billion-plus people roam this rock), but as Sacramento shifts between its two seasons — from too fucking hot to too fucking cold — I find that my tastes tend to change and I start to seek out some slower, darker, and doomier material, and the reviews come easier because of that.

We love us some melodic doom metal here at NCS, as evidenced by our coverage of bands like Daylight Dies, Aetherian, Mist Of Nihil, Enshine, October Tide, In Mourning, and even Insomnium’s slower stuff, just to raffle off a handful of bands, and Athens, Georgia-based Woccon have been a recent newcomer to that fold. We actually included a track from Woccon’s debut EP on our gigantic list of Most Infectious Songs Of 2013, and the wait for Solace In Decay has been a long one.

Woccon formed out of a common love of a group of influences in the melo-doom genre (for lack of a better term — I’ve seen “Ethereal Doom” bandied about and kind of like the idea, but only for the bands who feel more like they were born in frozen-over forests). When a band like Woccon put out a disc like Solace In Decay though, as a metal fan it feels like you need to take notice. Even as the group’s first full album after a string of demos and EPs, the band have released something that doesn’t make the mistake a lot of bands in this genre commit — sounding like a group whose influences are clear and just acting those out, putting checks in boxes and praying at the proper altars.  Instead, Solace In Decay is the sound of a band who have found their place within the doom genre and seek to share that sweet, beautiful misery from a place you wouldn’t ordinarily expect. 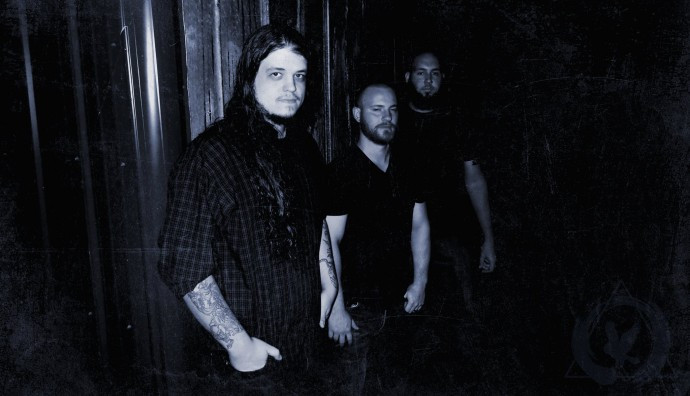 The thing about this style of doom is that it’s pretty rigidly defined, yet intensely hard to pull off. There is very much a certain set of milestones that must be reached to create this specific sound — but the place where you must then transform those into well-composed songs seems to be where many groups tend to find the first pitfall. They capture so much of the sound, but they never seem quite able to master the atmospheric section of it, the part that makes a song feel cold and bleak yet still retains something of ephemeral beauty. Solace In Decay manages to capture that quality and hold it within a firm grasp, coming off as a hybrid of Daylight Dies’ heartwrenching misery and Insomnium’s beautiful depression.

Woccon make surefire use of guitar melodies and pianos throughout their songs to create that cold atmosphere they are aiming for. At first, it isn’t immediately evident until near the end of “Giving Up The Ghost”, as the piano keys hammer down upon the listener, one sustained note at a time, pinning them to the ground. Where Solace In Decay really gains its footing, though, is in “This Frozen Soil”, a song filled with one of the best lead guitar melodies I have heard in some time. It’s one that comes in triumphant and loud, while at the same time appearing frail and fragmented, contributing another layer of blue-hued pigment to Woccon’s bleak painting .

On Solace In Decay, Woccon make extensive use of long, ambient passages, magnified by an echo-effect-heavy guitar. It happens throughout multiple song bridges, but one of the highlights for the sort of mood that Solace In Decay is describing is the song “Valadaline”. It starts with the scratching of an old vinyl record, like a message from the past, before it fully kicks into its heavy, guitar-driven melody. The song is wholly instrumental, but it still feels like the band are laying themselves bare for you to examine. It also leads into “An Enduring Remorse”, almost spilling over into that song. “An Enduring Remorse” is boosted by the strength of that preceding track, making the two almost inseparable in my mind’s eye.

For all my bullshit in the intro of this review about this group not sounding as if they are just worshiping at the altar of influences, it does feel like it was written somewhere in Ye Olde Booke Of Doom that you must write a song, or wrap parts of a song, with an instrumental section consisting of nothing but piano and the sound of rain. This is going to be an incredibly personal anecdote, and probably the most reductive and personal I’ll get, but the song “Wherever I May Be” immediately yanked me back to Insomnium’s closing notes in Above The Weeping World, after the catharsis of the epic song “In The Groves Of Death”, and it felt so, so good to be back. I hadn’t had that feeling in ages, and now one of the moments I immediately look forward to upon spinning Solace In Decay again is the time when “Wherever I May Be” starts up again and cascades over me.

Solace In Decay feels like years of inspiration pent up and finally released. It feels finely honed, and it has been exciting finally to get our grubby, disgusting hands on it. It’s also frustrating, because Solace In Decay is making a strong push for as much of my listening time as possible, hijacking me mid-review from so many other discs that I almost feel like I should be sending out notes of apology to those other bands. “Look, I love your new disc, I really do, but man, have you heard ‘This Frozen Soil’?”. Despite our already eager anticipation, Solace In Decay still proved to be a pleasant surprise. We knew that the disc was going to be good, but Woccon basically spend Solace In Decay’s run-time proving themselves to be masters of their craft; they’ve planted a pretty goddamned impressive flag for a debut record.

Woccon paint a bleak and ethereal picture, and it’s a surprising portrait because the music is so cold, the kind of cold that seems like it would preserve the body as an almost perfect ice mummy, the type of frost where decay could never happen. It has the bare trees, weighed down with icicles, style of beauty, the type of vista in which you imagine opening your door and looking out across a snow-covered field. Yes, while you know that it’s miserable and cold out there, there’s a calming acceptance to the feeling. Solace In Decay embraces that sound and makes the most of it, adding another notch to the belt of recent melo-doom/ethereal-doom bands coming out of the US, as well as adding another high mark to the genre overall.

2 Responses to “WOCCON: “SOLACE IN DECAY””