The time has finally come for renowned quirky Texas death metallers Baring Teeth to show the world another plane of terrifying sounds and squalor. As if their first album, 2011’s Atrophy, in all its demented brilliance, was not enough of a jaw-dropping testament to their skill and uniqueness, they set their aims at a higher and different place on Ghost Chorus Among Old Ruins, giving us is a wide range of dynamics within each song — like a massive fight for control between frenetic, entrancing splinters and the colossal depths of quicksand, whose power ultimately derives from its slow, suffering burn.

Not only have they moved further from the realms of their Obscura-influenced debut, they’ve managed to expand their sound. It would have been easy and standard for a metal band like this one to keep the same blazing tempo and stylistic formula the second time around. Yet this time Baring Teeth offer more cesspools and sinkholes to drop into, sucking up more of the music like a slow-draining black hole, while also offering full-scale onslaught the likes of which will make your face melt just a bit too much to recover from in one sitting. 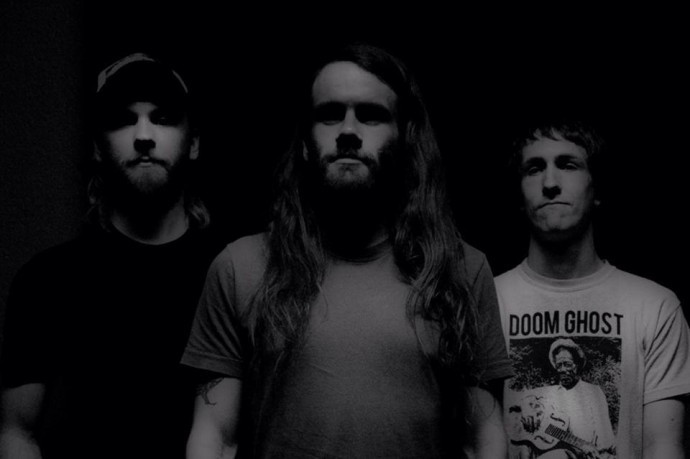 Sure, these doomier, almost jam-like segments, were peppered throughout their debut — but it feels like more of the time and spirit of this new record are invested in this new-found space in the music created by more stalking leviathan moments and restrained builds. But, within this slower embrace lie just as many traps and warp-speed-fueled moments, zooming out at a moment’s notice from the larger graveyard at hand.

Tracks such as “Visitant” exemplify their subtle balance between slow and fast in alternating waves, visiting the realms of a slow, trembling star that suddenly ignites into a hellfire that the eyes cannot bare to glimpse. And thus the ears are punished, with thunderous, skin-peeling, and nightmarish bolts of sound hurled at them mercilessly. And yet, a slight reprieve is granted soon after this near-fatal explosion, as the music sways brashly and menacingly, offering no genuine respite in spite of its slower gait.

The title track comes last, and is a fitting switch-up of a closer. It calls back to the frenetic insanity of their debut, while running at a foreign-sounding, alien lope more in tune with the new record’s stylings. The track from the record we premiered here at NCS, “Dripping Sun”, also attunes to a similar schizophrenic pace and pulse, seeming to channel French Jazz/Black/Death metal weirdos Ephel Duath on their Pain Necessary To Know album, as does the beginning of the track “Vector, Third Movement”.

“Mountain” continues the album’s approach to vacillating extremes. Characteristic of its name, the track leaves you susceptible to jagged falls and wild angry beasts, spending as much time leaping at you wildly as it does taunting you from thick, tenebrous shadows, as if trying to coax you out for one final blow. In this case teasing the torture is a form of pleasure.

Much like the last record, the guitars here are low-gain in their sound, more crystal clear than a lot of metal, giving the music a different edge and bite. Also like the last release, the marvelously played bass moves under and between the rhythms like hot lava, adding an interesting and different dimension to the proceedings and enhancing their lurchy and spastic nature.

Words alone can’t express how eye-boggling their drummer is. He adds an expressive flair and highly finessed additions beyond the expected death metal skin-bashing trade, which are both intriguing and commendable. He is an explosively powerful force that is arresting, giving such a manic performance that he appears to be trying to exorce demons by bashing a drum kit into rubble. So much fury, yet so creative.

The band’s guitar player and vocalist share vocal duties rather than having a standalone frontman, and often the vocals will be lower in the mix than on a typical death metal album. This fits the kind of sound they’ve achieved, and lends more punch to each roar and growl since the instrumental performances take a higher position on this album than the vocals.

Ghost Chorus Among Old Ruins, as a title, says a lot about the gloomy atmosphere of the album. It serves as a metaphor for our current civilization, as we bask in the afterglow of man’s achievements, soon to turn to rubble and outdated dust. It offers dissonant crumbles and fucked rhythms instead of the trite and dime-a-dozen flashiness all too common in technical death metal. While the music of Baring Teeth is very complex, they don’t reside in the same sonic universe as 99% of technical death metal bands. They are far too spastic, far too dissonant, too angular in approach, and nearing math-rock qualities in their rhythms and the flow of the sounds, to be summed up by the conventional idea of tech-death. Baring Teeth are onto something far more brilliant and darker than most, and it’s for that very reason that Ghost Chorus Among Old Ruins is worth the investment of your time.

To my ears, Baring Teeth‘s music resembles what would happen if Dysrhythmia decided to adorn their heady progressive essence with an avant-garde death metal veneer. It’s hard to grasp, and even harder to get into, but once Ghost Chorus Among Old Ruins sinks in, it hits like a goddamn nuclear bomb. It lingers and haunts you, beyond its overwhelming initial explosive impression and heft. The record leaves something with you that never goes away, continuing to poison and influence your every cell.

The album will be released by Willowtip Records on November 25. It is streaming in its entirety at Revolver (here), though it will presumably be available for listening on Bandcamp shortly.