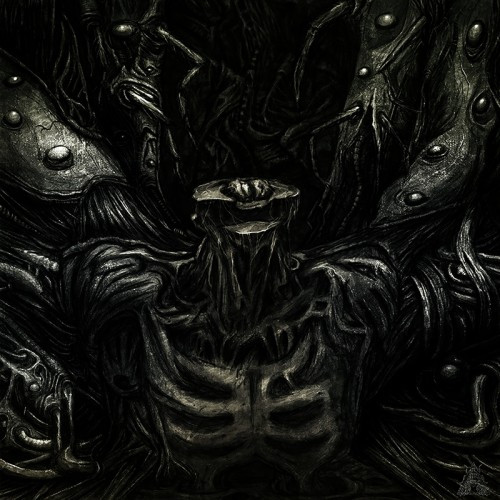 Both of these Toronto bands’ last releases came out in 2012 — Adversarial’s split with Antediluvian (reviewed here) and Paroxsihzem’s self-titled debut album. Both of them were hellholes of violence and depravity, which is to say they were excellent. So are these two songs.

Adversarial’s track is “Warwolf”, and it’s a dense, chaotic storm of distorted riffs and snapping/tumbling drum strikes. Pestilential guitar leads writhe through the murk like diseased serpents, enhancing the alien atmosphere of the music, and the vocals are a horror show of inhuman voraciousness.

Deep currents of inky darkness flow like congealing blood through the murk of Paroxsihzem’s “Maelstrom of Four”, the buzzing, dissonant riffs and machine-gun percussion generating a suffocating miasma of gloom while the vocalist utters terrifying proclamations from the depths of a cavernous pit. The coffin lid has been nailed shut, the funeral earth has been piled high, and we have become the home of maggots .

In these two songs, both bands have delivered blackened death metal malignancy of a very high order, and we are anxious to hear what else awaits on this release.

Warpit of Coiling Atrocities will be released in early December 2014 by Vault Of Dried Bones and can be pre-ordered here. The LP version will be released in early 2015 through Vault Of Dried Bones and Iron Bonehead Productions. The album was mixed and mastered by V.K., and the cover art — which is stupendous — was rendered by Paroxsihzem’s vocalist, Krag. Here’s the track list:

Enough with the words. Time to detonate these death metal WMDs.

4 Responses to “AN NCS PREMIERE: ADVERSARIAL AND PAROXSIHZEM — NEW MUSIC FROM “WARPIT OF COILING ATROCITIES””