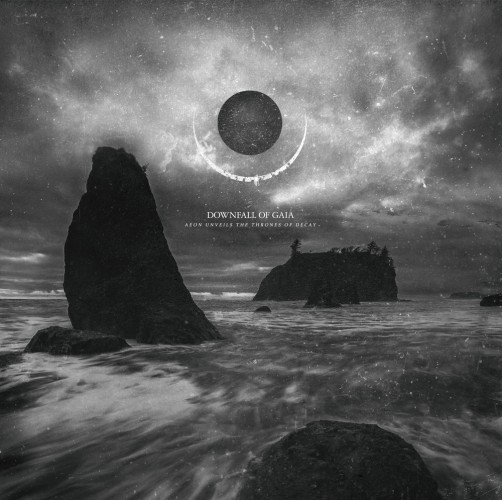 (Austin Weber reviews the new album by Downfall of Gaia, out now on the Metal Blade label.)

While my metal tastes are not as honed in on the ongoing post-metal wave as on other genres, I can always respect and love a band of any stripe who go beyond the tropes and usual containments of a style to find their own identities, alone in a place none have gone before. Bands like that are worth the investment of time in what they have to say about the world and themselves.

That’s precisely how I feel about the new Downfall Of Gaia album, Aeon Unveils the Thrones of Decay. The only other reference that might give you a ballpark idea of their territory is Agrimonia — both have perfected a blend of post-metal and crust-punk woven into a swirling, multi-genre template that retains an aggression lost in most post-metal, although Downfall Of Gaia thread in a lot of menacing black metal, full of killer riffs, into their tapestry, with many more aggressive moments than in Agrimonia’s music. 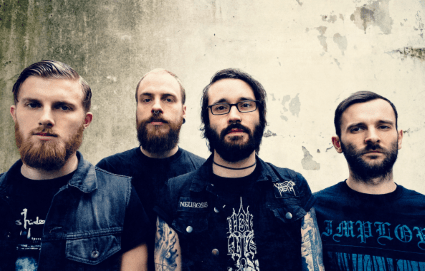 In bits and pieces, I am also reminded of Altar Of Plagues as well, though Downfall of Gaia go for longer, more grandiose, back-and-forth sweeping songs.

I’m honestly surprised that this album hasn’t gotten more press and praise, as it’s precisely the kind of album a lot of metal critics would be into, particularly those who don’t give accolades to death metal or the majority of grindcore! People who rated Sunbather would like this, though I like it a lot more. It’s artistic but not pretentious, elaborate but not overwrought, and altogether emotionally profound and haunting on several levels.

Downfall of Gaia skillfully shape and mold flowing structures out of a mix of black metal, crusty grind bursts, sludge, and sprawling, sometimes doomy, post-metal in a way that’s worthy of your utmost attention. It’s the unique execution of this mix that makes it what it is, not the ingredients used. Absorbed in all its multifaceted brilliance, while taking in the towering multi-part songs that play out in grand, sweeping movements throughout the album, arcing through a trajectory of powerful wavering peaks and valleys, the word “epic” frequently comes to my mind

It’s precisely because of what they have achieved that trying to explain the songs in depth would largely be an excessive task — there are just too many parts, loop-arounds, and ebbs and flows from calm to furious within each song to do it justice in words.

I will, however, mention “Carved Into Shadows” as probably my favorite go-to song from the release. Beginning in a doomy, extended fog, they then channel the spirit of Converge to bring forth a powerful display of blackened pestilence, book-ended by a gnarly sludge riff and stomp straight out of the Remission-era Mastodon playbook of heaviness and sheer Neanderthal menace.

From there, the song becomes more mercurial and bittersweet, like a union of quicksand and bitter frost, slowing you down with the song’s sheer immersive force. The towering, majestic climax reaches an even higher point, with marching drum beats and wailing yet squalid riffs, rising up until sputtering out like a body bruised unto death after a tumultuous battle.

Album closer “Excavated” comes in a very close second. though. The damn thing won’t stop sending chills down my spine every time I play it. It begins with a light and misty ethereal atmosphere that builds exponentially, slowly letting a drone siren-call take the lead, the drums gradually entering the frame. The main riff starts to creep out from the bottom, as it oddly shifts into a calmer lull.  Not the climax you expect, but then the song suddenly explodes — lighting up with fat riffs and a smothering groove.

Black metal intertwined with crustalicious d-beat shakes the dust off the song’s beginning coat, giving it a speed boost, though the band soon drop back into a slower gear, followed by eerie piano playing that moves to the forefront, playing the key segment of the song as the outro, followed by a surge of static.

The band’s songs go through so many different movements, and twists and turns, with the aim of building absolutely massive heights and the lowest of somber lows. Downfall of Gaia have succeeded where many bands of their ilk have failed, by writing songs that display an extended musical tension, skillfully simmering and smoldering and much more effectively relying on the use of soft/loud dynamics that feel played out in more amateurish hands.

Aeon Unveils the Thrones of Decay is truly a cut above most of the band’s peers. If you’re in need of an album that is more than the sum of its parts, one whose music leaves a powerful, indelible impression, look no further. Give it a listen.

6 Responses to “DOWNFALL OF GAIA: “AEON UNVEILS THE THRONES OF DECAY””