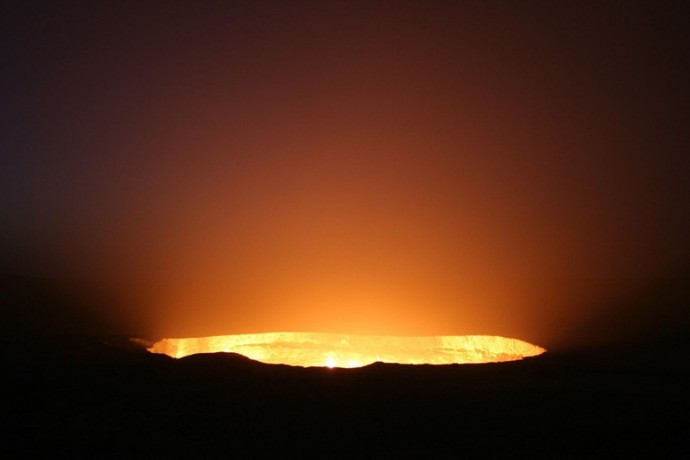 It’s been six weeks since I compiled one of these posts. I was going to let another week go by because laziness is my master but then I got some messages from Phro demanding entertainment which somehow he did not find in my Hetroertzen review from earlier today so I relented and sacrificed some time at the gym and wrote this thing making sure to begin it with a long run-on sentence because running is supposed to be exercise and since I’m not going to the gym I need some kind of substitute.

And since Phro caused me to lose my desperately needed gym time, I’m going to embarrass him and stream this version of “Jingle Bells” that he recorded using a koto that he allegedly played with his own hands, accompanied by some computer-generated orchestration.

Okay, now that I’ve embarrassed Phro (and believe me, that’s a Herculean task), let’s get to the business at hand — a new collection of videos, images, and news items that I think are metal even though they’re not metal music. I have eight items for you today. 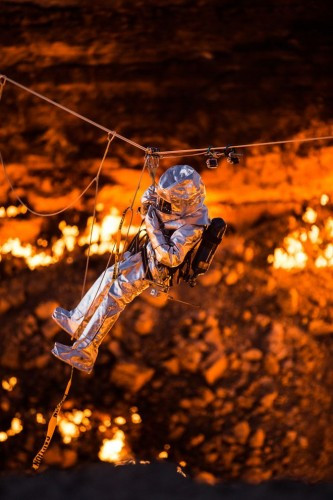 Ten months ago I included in one of these THAT’S METAL! posts a feature on The Door to Hell, which is the popular name given to the Darvaza Crater in a natural gas field near the village of Derweze in the Karakum Desert of Turkmenistan. The photo at the top of this post shows the natural gas fire that’s been burning continuously since it was lit by Soviet petrochemical scientists in 1971. Why did they do this? You can find the explanation from The Font of All Human Knowledge, but the short answer is, they fucked up.

Thanks to a tip from Booker, I learned that in November 2013 adventurer George Kourounis (whose fiery exploits I’ve featured once before — here) actually went down inside the crater — which is 225 feet (69 meters) wide and 99 feet (30 meters) deep — in an expedition partially funded by National Geographic. As National Geographic explains:

“At the bottom he collected soil samples, hoping to learn whether life can survive in such harsh conditions—and perhaps shedding light on whether life could survive similar conditions elsewhere in the universe.”

Yeah, right. It doesn’t take an Einstein-ian intellect to figure out why he really did this: To make millions of people exclaim HOLY SHIT!!! Or alternatively because he derives intense sexual pleasure from being enveloped by scorching heat. Take your pick.

This hair-raising expedition is the subject of an episode of the National Geographic series Die Trying. An excerpt from the show can be viewed below, and to read an interview with Kourounis about this remarkable feat, go here. The whole video is on YouTube at this location. 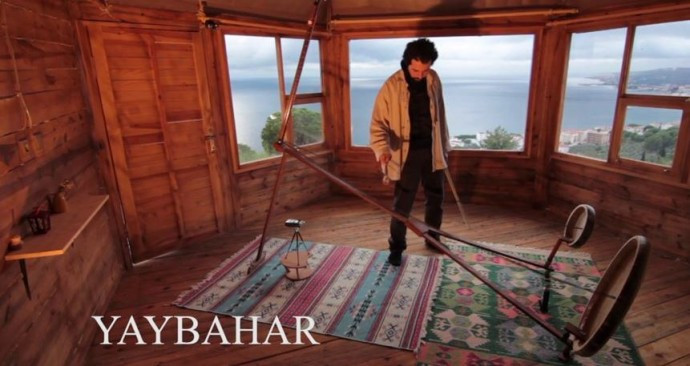 “Yaybahar is an electric-free, totally acoustic instrument designed by Görkem Şen. The vibrations from the strings are transmitted via the coiled springs to the frame drums. These vibrations are turned into sound by the membranes which echo back and forth on the coiled springs. This results in an unique listening experience with an hypnotic surround sound. What you hear in this performance is captured in realtime without any additional effects and with no post audio processing.”

I found this fascinating, in part because of the vistas from the window of the room where the performance was recorded. It’s identified as Alişler Yurdu, which appears to be on the Marmara Sea a few hours from Istanbul, Turkey. The music is quite cool, too (and yes, I know it’s a bit of a cheat on the usual format for these posts — but it’s not metal music).

Yaybahar by Görkem Şen from Olgu Demir on Vimeo. 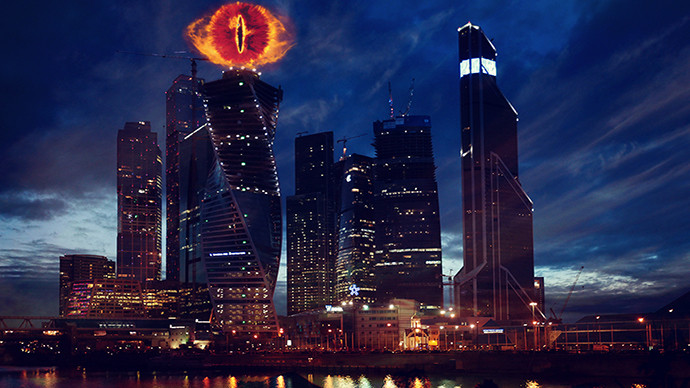 This would have been metal as fuck.

Last Thursday night was the premiere of the latest Hobbit movie in Moscow. To celebrate the occasion a Russian art-group named Svechenie planned to create a light installation on top of the “IQ-quarter” complex at the Gals-development company in the Moscow International Business Center — creating a real-life Eye of Sauron above Moscow-City. Above is a rendering of what the project would have looked like (more details about the project can be found here).

Unfortunately, the Russian Orthodox Church filed a complaint, as did the mayor’s office (something about “unsanctioned advertising”), and the installation was cancelled. According to this article:

“‘Eye of Sauron’ is “in any case, a demonic symbol,” Archpriest Vsevolod Chaplin, a senior church official in charge of relations with the society, stressed.

“Such a symbol of triumphant evil rising above Moscow and becoming one of the tallest objects in the city…is it good or bad? I am afraid it’s mostly bad. One shouldn’t be surprised if something goes wrong with the city after that,” Chaplin told Govorit Moskva radio station.”

This is why we can’t have nice things.  I’m afraid I have only one other thought at the moment: Fuck that guy and whoever knuckled under to the pressure. 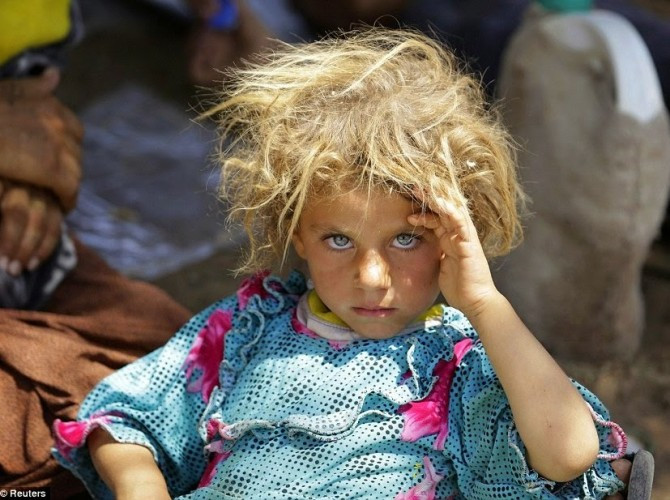 This next item really isn’t metal. It’s just another nauseating example of religious persecution, but that last item about the Eye of Sauron put me in mind of it.

You may have read the horrific story from earlier this fall about Islamic State fighters kidnapping 300 women from a Kurdish ethno-religious community called the Yazidis in order to break up the ancient sect’s bloodline by raping them and forcing them to bear mixed-race children. I didn’t know anything about the Yazidis at the time, but later found the following information reprinted at TYWKIWDBI:

The minority group is originally Aryan and has retained a fairer complexion, blonde hair and blue eyes by only marrying within the community.

The Yazidis are monotheists, believing in God as creator of the world, which he has placed under the care of seven “holy beings” or angels, the “chief” (archangel) of whom is Melek Taus, the “Peacock Angel.”… some followers of other monotheistic religions of the region equate the Peacock Angel with their own unredeemed evil spirit Satan, which has incited centuries of persecution of the Yazidis as “devil worshippers.”

Persecution of Yazidis has continued in their home communities within the borders of modern Iraq, under both Saddam Hussein and fundamentalist Sunni Muslim revolutionaries. In August 2014 the Yazidis were targeted by the Islamic State of Iraq and Syria in its campaign to “purify” Iraq and neighboring countries of non-Islamic influences…

More information about the plight of the Yazidis and their unusual religious beliefs can be found here and here. Just one more reason to wish that the Islamic State jihadists perish in fire.

Well, that was depressing. Let’s get back to the Eye of Sauron, shall we?

The photo above was taken by Swedish astrophotographer Göran Strand in April of this year. It’s a display of atmospheric optics caused by ice crystals high in the atmosphere. The crystals bend light around the sun, and in the rarely captured phenomenon shown in this photo, the halo effect completely circumscribes the sun, making it look pretty much exactly like… THE EYE!

More info about the photo and the scientific explanation for the phenomenon can be found here (thanks to Jim for tipping me to this).

Related to this is a painting I saw featured on the TYWKIWDBI blog. The painting is below, and here’s an excerpt of the long story about it on The Font of All Human Knowledge:

Vädersolstavlan (Swedish for “The Sun Dog Painting”) is an oil-on-panel painting depicting a halo display, an atmospheric optical phenomenon, observed over Stockholm on April 20, 1535. It is named after the sun dogs (Swedish: Vädersol, “Weather sun”) appearing on the upper right part of the painting. While chiefly noted for being the oldest depiction of Stockholm in colour, it is arguably also the oldest Swedish landscape painting and the oldest depiction of sun dogs… 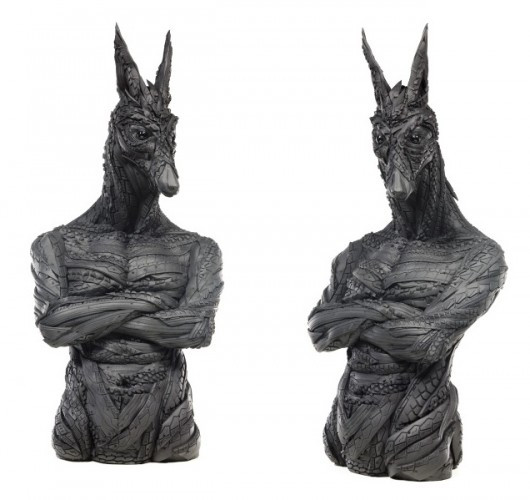 Yong Ho Ji is a Korean artist who makes sculptures out of steel and used tires. Very cool. “Jackal Man” is above; more of his work is below (and additional examples can be seen here and here).

(via io9, with thanks to Utmu for the tip) 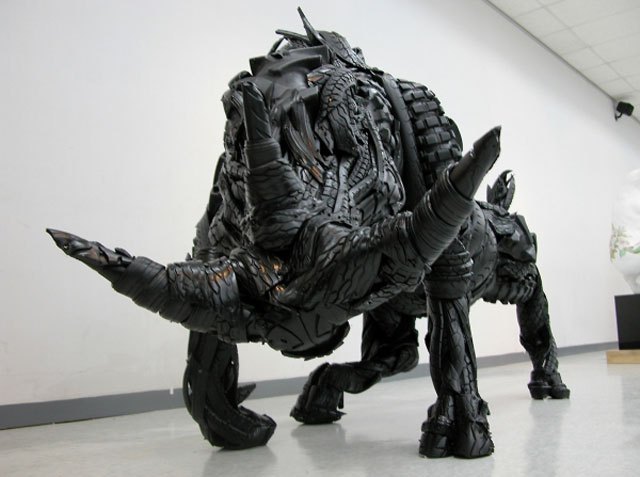 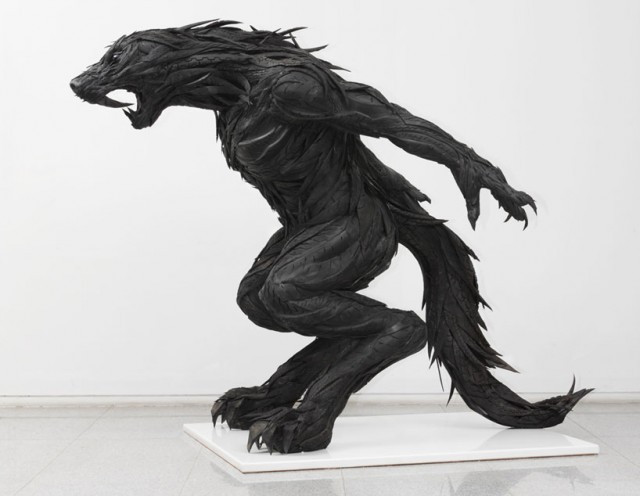 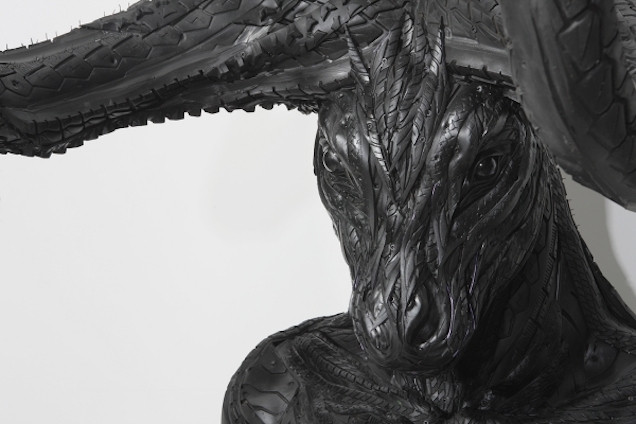 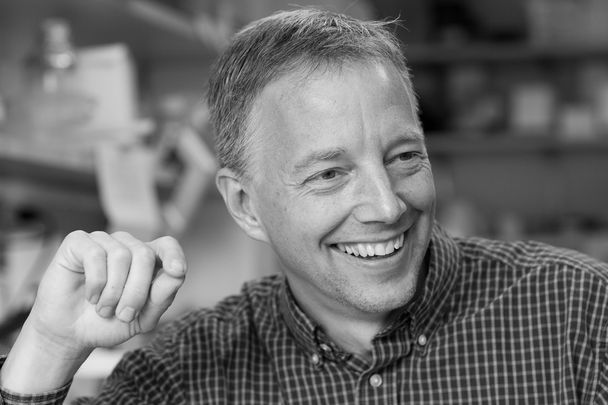 Dr. Jim Olson is a pediatric oncologist at the Fred Hutchinson Cancer Research Center in the city of Seattle, near where I live. He is doing two related things that strike me as very metal. First, as reported in late October in the Seattle Times:

His laboratory has developed a cancer-seeking compound that highlights malignant cancer cells in a patient’s body. The compound is derived from chlorotoxin, a molecule found in the venom of the deathstalker scorpion.

They call it “Tumor Paint,” since it gives cancer cells a fluorescent sheen that can be seen during surgery — saving doctors from removing healthy cells and from leaving cancerous tissue behind.

One problem with Olson’s research is that it’s so unusual that it was initially tough for him to find funding from the usual granters for cancer research. And that brings me to the second metal thing about his activities (from the same article):

Olson, a pediatric oncologist at the Fred Hutchinson Cancer Research Center, was drinking whiskey with his friend, musician Noah Gundersen, when they landed on the idea of making a CD of music by local indie artists and selling it to fund Olson’s cancer research.

Unlike most ideas hatched this way, it still made sense the next day.

So began “The Violet Sessions,” a CD that went on sale last week (projectviolet.org), and includes Gundersen, Hey Marseilles, OK Sweetheart performing in Olson’s home. The CD — and the project — was named after one of Olson’s early patients.

This isn’t the only way Olson has funded his research, but it’s the coolest one. And by the way, the National Cancer Institute has decided to help fund Olson’s research; and in 2010, Olson founded Blaze Bioscience, which has raised $20 million through individual donations. The full story, which is an excellent read, can be found here. 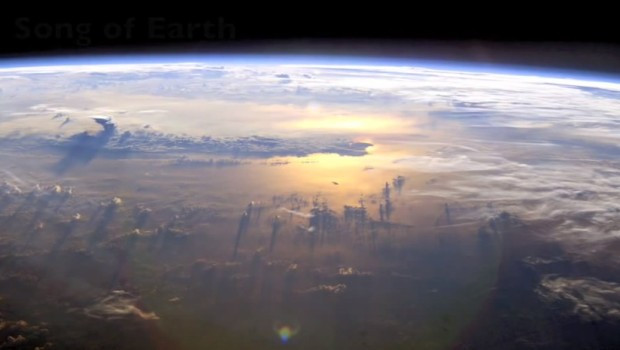 I’m going to close this hastily thrown-together edition of THAT’S METAL! with some sounds from space.

Yes, it’s true that there are sounds in space, despite the fact that it is a virtual vacuum. The explanation for this phenomenon, and how the sounds were captured, appears in the following video. The video includes sample sounds of the planets, moons, and rings of planets in our Solar System recorded by NASA instruments. Note: both the Song of Earth and Voice of Earth are man-made compositions using the original Earth recordings. This is very cool (and even though the video has been around for four years, it’s really brand new, because I just saw and heard it.

P.S. NASA has uploaded a lot of sounds from the Solar System to Soundcloud, and I’ve embedded them below: