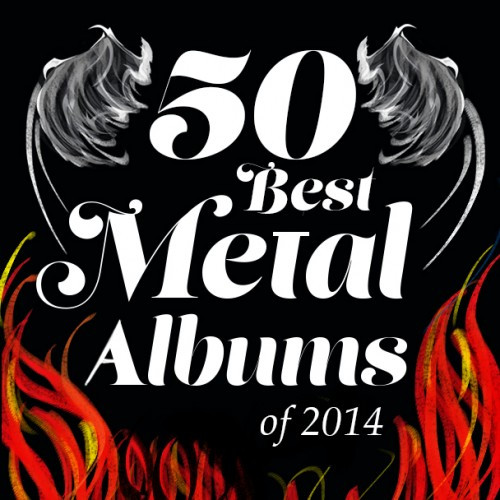 Here we have yet another list of best metal albums of 2014 from yet another “big platform” web site, i.e., one with a large online audience that doesn’t cater mainly to metalheads. This time the list comes from Stereogum.

I’ve been waiting for this one, not because I thought it would be amusing in the way that lists from other such places are often amusing, but because there are some studs who put the Stereogum list together: The list was compiled by Michael Nelson, Ian Chainey, Aaron Lariviere, Wyatt Marshall, and Doug Moore.

To be clear, I don’t have any personal knowledge of their sexual exploits, but these are people whose opinions about metal I respect — their monthly Stereogum column, “The Black Market”, is one I always make time to read even when I don’t have time to read much of anything else in the sphere of metal writing.

As Michael Nelson explains in his entertaining and thought-provoking introduction to the list, it’s a result of compromise — the give-and-take among these five writers, not compromises dictated by editorial direction and pandering to readership demographics, which is the kind of smell I’ve gotten from a few other lists from other places that I’ve re-posted here.

He acknowledges right up front that the list is missing some names that many knowledgable fans would expect to see, not because the albums weren’t good, but because they didn’t survive the debate among the writers that produced the final compilation.

The list does include many of what I’ve come to think of as 2014’s “usual suspects”, i.e., good albums that seem to be appearing everywhere, including at a lot of those other “big platform” sites — Triptykon, Pallbearer, Behemoth, At the Gates, and YOB. Yet the placement is far from typical — only two of those albums are in the top 10, and those two are in the company of excellent albums by more obscure bands such as Nux Vomica, Horrendous, Thou, and Artificial Brain.

There are a lot of other things I like about this list. It gives recognition to many deserving albums that have been overlooked by most of the lists I’ve been seeing at other sites — Martyrdöd, Dead Congregation, Thantifaxath, and Sivyj Yar are in the top 20, and the top 30 includes Teitanblood, Slugdge, Diocletian, and Abigor. Good to see those names, and there are relatively unheralded gems spread throughout the rest of the list, too.

Yes, there are albums I wish I’d seen on a list of this length — off the top of my head, I’d name the ones from Spectral Lore, Thy Darkened Shade, Cretin, and Nightbringer (and I assume Solstafir was omitted because the writers didn’t think it was metal enough) — but that’s the nature of the list-making beast: The only list any of us will love from top to bottom is the one we make for ourselves.

Having said that, where da folk metal at?

Go here to read the Michael Nelson’s introduction and the explanations for each pick. Here’s the list: