(Andy Synn’s five-part retrospective on the year in metal concludes with his list of the “Personal Top 10″. Previous installments on the “Great”, the “Good”, the “Disappointing”, and the “Critical Top 10” albums can be found here, here, here, and here.)

So this is it… it’s the Final Countdown (cue the music!)

Seriously though, I hope you’ve all enjoyed and appreciated all my lists so far, and discovered (or rediscovered) some new or overlooked gems in the process. It’s definitely as much fun for me to write the things as I hope it is for others to read them, as it allows me to collect my thoughts and really take stock of just how good each year is, and look back on all the various trends and twists that have come and gone.

My “Personal Top 10” list is exactly that, a simple representation of what I have personally (and almost uncritically) loved the most this year. Whereas I try and make the “Critical Top 10” list as impartial and honestly representative of the year as I can do, my Personal list is just a reflection of my own tastes and biases – unashamed and unfiltered.

I can tell you right now, in fact, that even if I were to expand the list to 20, only a few entries from the Critical list would probably get a look in. Some would, no doubt about it, but by and large my personal favourites differ quite a bit from what I’d objectively class as the year’s “Best” albums. Though I’d argue that many/most of these albums definitely are amongst the best I’ve heard this year.

So, without further ado, my final list of completely super-pretentious garbage for all of those unlucky enough to have been born after the 1970s!

First some honourable mentions, unranked, that I just felt deserving of another mention:

The best thing the band have ever done, make no mistake. Brutally heavy yet effortlessly distinctive.

Shameless Death Metal lunacy that goes straight for the throat, yet also incorporates some frankly audacious melodies and solo work.

20 years into their career and the Belgian blasphemers are absolutely at the top of their game.

And now, the main event, my ten favourite albums from this year (roughly) ranked in numerical order! 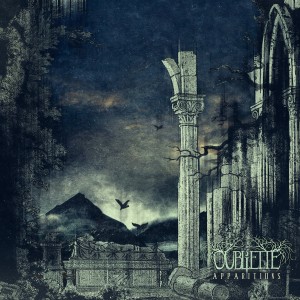 The first of two debut albums on my list, this one initially grabbed my attention way back in July when Islander featured them in one of his “Seen and Heard” round-ups, and I was immediately enraptured by their ethereal melding of blackened fury, sombre beauty, and glorious majesty. Situated somewhere between the post-black magic of Agalloch and the melodic grandeur of Insomnium, yet by no means a mere carbon-copy of either, it’s by turns ferociously aggressive – Emily Low’s pitch-black snarl in particular is utterly eviscerating – and hauntingly beautiful, with every song offering something truly special — whether it’s a ghostly, clean-sung vocal melody, a soaring lead refrain, or a blizzard of scalding blast-beats -– to captivate the listener. 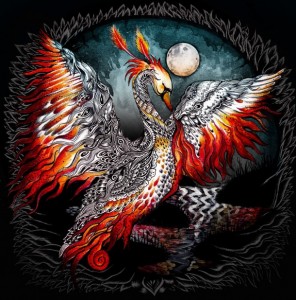 Much like the previous entry, this seems to have flown under a lot of people’s radars this year, but to my mind it’s an absolutely phenomenal, emotionally draining, listen. A monstrously heavy guitar tone (drawn from the Monotheist school of sonic devastation) and an array of bestial roars, gravelly screams, and melancholy vocal melodies (courtesy of Swallow the Sun’s Mikko Kotamäki, sounding more driven and alive here than he has in years), are welded to a series of songs so crushingly dense and weighed down with pain and sorrow that not even light can escape their pull. Without a doubt the most under-appreciated doomy gem of the year. 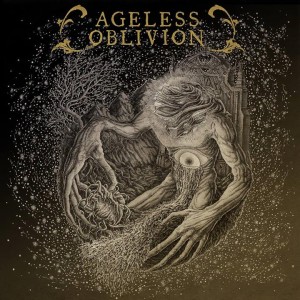 Technical, progressive, complex, dissonant… this album is an absolute delight, which reveals more and more with each listen. With its tormented mix of tangled riffs, barbed melodies, frankly mesmerizing drum-work, and truly ominous and oppressive sense of atmosphere, it’s an album that confidently positions the band right up there alongside Ulcerate on the absolute cutting edge of hyper-modern, ultra-heavy Death Metal. It creeps and it crawls and it blasts and it bludgeons, heaving and breathing and pulsing with organic life, entwining disharmonic chaos and moments of tortured beauty with cold, compelling clarity. 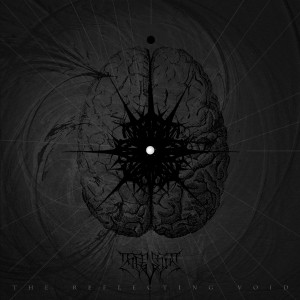 On their fourth album now, one-man Black Metal act Infestus continue to challenge and reject the expectations of the format (no phantom-thin, “necro” guitar tones or aimless keyboard “expressionism” to be found here) in favour of something much more riff-heavy and powerful. The massive riffs and scything tremolo runs are coated in blackened venom, the caustic vocals dripping with anguish and poison, and the melodies are laced with cyanide – suicidally bleak yet relentlessly addictive and depraved. As menacingly misanthropic and virulently infectious as anything I’ve heard this year, every track opens up a window into a cold and endless void where genius and madness collide, the shadows staring back into your soul with predatory intent. 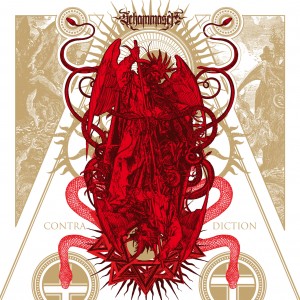 Hugely ambitious in scope and vision, and utterly ravenous and unrepentant in its execution, this ostentatious, uncompromising double-album of occult grandeur and majestic rage defined a huge chunk of my year. Absolutely hypnotic from start to finish, it’s one of those albums I can guarantee you I will still be coming back to in years to come, discovering yet more hidden layers and twisted riddles with every listen. It’s a huge undertaking, make no mistake, but it rewards the time put into it with an experience unlike anything else I’ve encountered over the past twelve months. In my opinion a true masterpiece of form and composition. Utterly and irresistibly compelling. 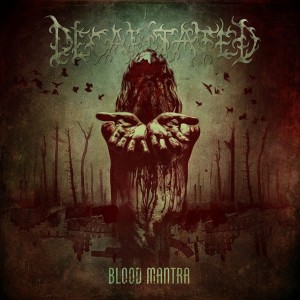 Oddly divisive this one. I know a lot of people didn’t like it, and I know a lot of people who (like me) absolutely loved it. I think it just comes down to the fact that Vogg is an absolute master of the metallic martial arts, and capable of writing songs that penetrate your cerebral cortex and lodge there like some sort of biomechanical, constantly evolving parasite – demanding your attention with their barbed hooks and seething aggression, and refusing to be dislodged no matter what you try. From the cybernetic Death Metal violence of “Exiled In Flesh”, to the ugly, pulsating grooves of “Veins”… to the twitchy, piston-powered attack of “Nest” and the deep-burn of “Blindness”… there’s always a new trick or twist waiting to be unleashed. And that moment in “Instinct” where the band tease a searing thrash metal riff, only to drop into a massive (and unexpected) rhythmic riff-hammer instead? Absolute perfection. 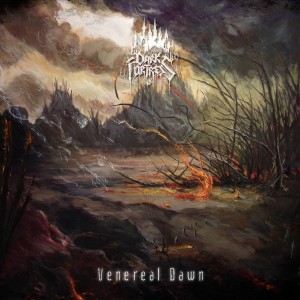 I’ll admit that, initially, even I was a bit thrown by this one. The band have fully embraced their progressive side on Venereal Dawn, leading to an album that takes a little bit more work to get into than Ylem (still my personal favourite). But the effort to explore this album is entirely worth it, as it unfolds into something rather special indeed. The songs possess an apocalyptic grandeur and are shrouded in a pall of oppressive doom and gloom, infecting and possessing every iron-clad riff and nightmarish lead with the ever-present shadow of death and decay. The ambitious compositions see the band stretching their sound further than ever before, without once losing touch with their core identity. In particular, one can hear drummer Seraph developing his percussive palette in new, creative ways, whilst vocalist Morean continues to push himself to new heights of expression and emotion, expanding his range and versatility in the process, allowing the band as a whole to explore new elements and new forms of darkness. 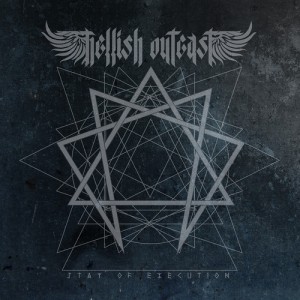 Easily the most outright aggressive and antagonistic album on the entire list, the second outing from Norwegian Death/Thrash maniacs Hellish Outcast takes everything from their debut and pushes it harder and further than ever before. It’s heavier, harsher, angrier… yet also more varied and intelligent, capable of surprising the listener just when they think they have the album figured out. Annihilating thrash-attacks like “Hunter Supreme” sit seamlessly next to Death Metal monsters like “Gods of Fear”, while punishing assaults like “I Can No Longer See The Sun” and “Heresiarch” fearlessly incorporate whole segments of eerie melody, one second bludgeoning with psychotic intensity, the next inverting in upon themselves in a display of brooding despair and desperation. 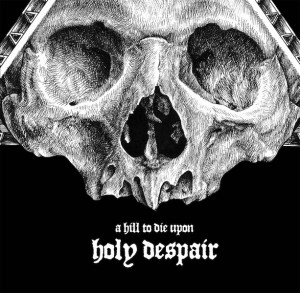 Another blistering release from a band who just keep getting better and better, refining, defining, and improving their sound with every album. These guys just have a certain way about them, a certain style, which makes them stand out from the rest of the Blackened Death Metal menagerie. Maybe it’s the distinctive way they write and compose riffs, or the sheer variety of approaches they pursue (from blast-furnace frenzy to colossal, stomping groove, to imperial, immortal melody)… or maybe it’s just the fact that each and every song, in its own particular way, is absolutely titanic in its own right. Whatever it is, I’m confident that these guys are something special. 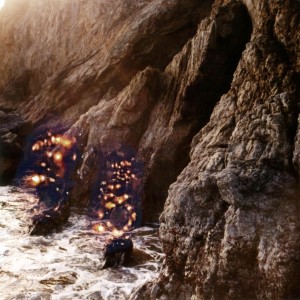 I honestly regret the fact that I only managed to cover this album in brief in one of my irregular “Reviews in Haikus” columns, because it really has blown me away. Over the course of the year I always meant to get round to giving it a proper review, but other priorities kept getting in the way… and then, when I realized I was going to be putting this as my No. 1 choice from the year… well, it just seemed prudent to wait until now to give it the credit I think it deserves.

Right from the moment I heard it I knew I was onto something unique with this one. Devastating cascades of blackened plasma contrast and combine with radiating waves of psychic ambience, breaking and collapsing into cosmic conjunctions of negative void and infinite absence before erupting into sudden surges of blazing aggression, all tied together into one utterly cohesive, at times awe-inspiring, exploration of time and space.

A thunderous barrage of blast beats, kick drums, and crashing cymbals drives the album through its endlessly inventive, mesmerizingly transformative twists and turns, as the vocals unleash a combination of raw, ravaged screams and harsh, throaty gutturals, and the guitars constantly meld and mutate into fresh new forms, transitioning from echoing cosmological chords into radioactive tremolo runs and explosive, exotic riffs with shameless abandon.

It’s a transcendent musical experience that embraces both haunting calm and raging catharsis in equal measure, and by far my favourite album of 2014.

And there we have it folks. Ten albums which I think sum up my musical tastes from this past year in metal. I think there’s quite a bit of variety on offer (which, actually, wasn’t pre-planned in any way), and so hopefully every one of you will at least be compelled to check something out you may not have heard of before!

Thank you again to everyone who’s taken the time to read and comment on all of my lists, even those of you who… well, you know who I’m talking about!

And, finally, a big thank you to all the bands on the list. Without your music, my life would be a much less rich, much less enjoyable experience.