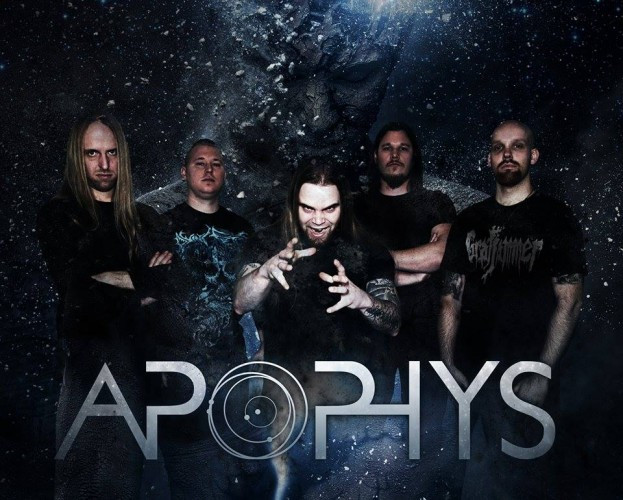 At the time I wrote that post in June, the band were working on a debut album — and then last month brought the surprising news that Metal Blade Records had signed Apophys and would be releasing that debut full-length to the masses.

The ranks of Apophys do include people who have all established a track record with other bands: drummer Michiel van der Plicht (ex-God Dethroned, ex-Prostitute Disfigurement, ex-Detonation); bass player Mickeal Schuurman (ex-Monvolland), guitarists Sanne van Dijk (Erebus) and Koen Romeijn (Detonation), and Kevin Quilligan himself (Toxocara, Erebus). Still, a new band getting signed by Metal Blade for the release of a debut album isn’t something that happens every day.

I reached out to Kevin Quilligan to ask him about this experience and to try and get a few hints about the album. We had a Facebook chat yesterday, and here it is (most of the photos below were taken by Frans van Arkel): 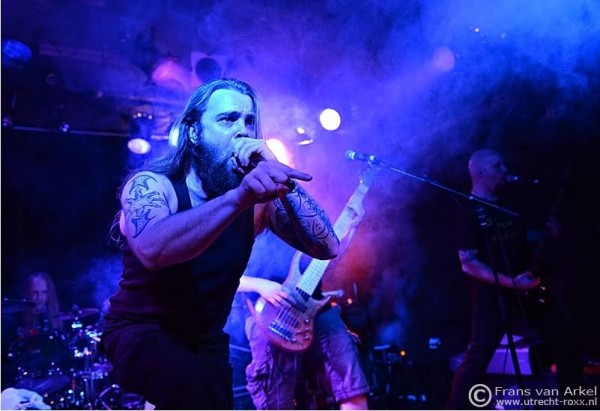 Thank you for making time to answer some questions. I guess a good place to start would be to ask you to introduce yourself to our readers and describe the role you play in Apophys.

My name is Kevin Quilligan . I’m the vocalist for Apophys and founding member. I started writing demo songs with Sanne (Guitar) in 2012 with no real intentions to create a new band in the first place. But we felt this was some of the best material we had written until then and we wanted to see what we could make out of this. First and foremost was to find a drummer that would be able to contribute. Michiel was the obvious choice, seeing as we’ve known each other for years and he is one of the best drummers I know, especially in this particular genre.

Me and Sanne write most of the music, I also recorded and mixed our first album.

Even though all of you have track records in other bands (such as God Dethroned, Mondvolland, Detonation, and your own other bands), it’s still a pretty rare achievement for a label with the size and history of Metal Blade to sign a band for the release of what will be your debut album. How do you feel about that?

It’s unreal. The one thing that every aspiring metal musician with a track record of 10+ years can agree about is that it’s hard work. The amount of bands in the Netherlands alone is incredible. So when Metal Blade approached us we were ecstatic and we didn’t hesitate to accept the offer. We got the chance and we were on it like a pack of dogs.

The good thing about us all having spent a lot of time in bands before Apophys is that now, when this has the potential of getting serious, we feel ready for it. 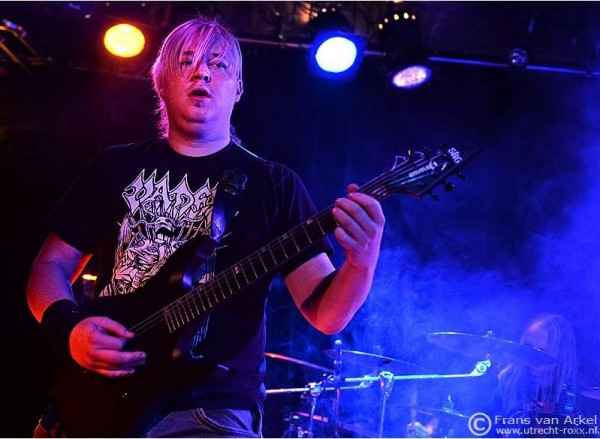 Had you finished recording and producing the album before the contact with Metal Blade?

Yes, we started working on the album about a 6 months after the promo was released. Because of the response to the promo tracks being as great as it was, we were eager to get started on the album. We had the songs done and because we recorded the biggest part ourselves, we could get started as soon as we felt like it.

The album was done in March 2014, and we got in touch with Metal Blade a few months later.

Are you able to provide an estimate of when the album will be released?

The album will be released early on in the year. We can´t wait to hear what people think of it. 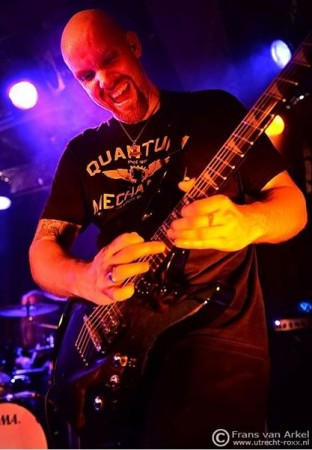 I would guess (but don’t know) that you will have to make some adjustments in your lives in order to work with Metal Blade on the promotion of the new album. Is that a good guess?

Good question, the funny thing is, we don´t know how this is all going to pan out. We are a new band, with a debut album coming out. Obviously having a label like Metal Blade backing you up is pretty much the best start you could ask for. But maybe the album will not go as well as we hope, maybe it will explode and we end up being in way over our heads and we need to change our lives rapidly to keep up.

This is something we did talk about a lot before we accepted any offers. We know that we want to make this as big as we possibly can and everyone of us is fully commited to it, so we just have to see what happens for now, it´s all pretty exciting.

It’s very damned exciting! And I guess all you can do is roll with it and see what happens. Unlike me (and almost everyone else in the world), you’ve heard the new album. Can you say how you think it compares to the 2013 demo tracks?

I think the biggest improvement is the production value of the album. I like to do a lot myself, I feel like I´m the only one who knows exactly where I want to go with the sound, so I like to be in control of that.

Nevertheless, I got to work with Jorg Uken at Soundlodge Studios for the drums and Stefano Morabito at 16th Cellar Studio on the final mix and mastering. These are both professional engineers and producers who outshine me greatly with their knowledge of creating an album.

Their contribution makes the album sound a lot bigger and more brutal than the promo tracks. The promo tracks were there to get the word out, the album is the real deal. 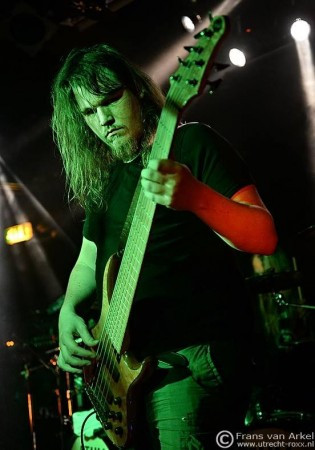 Those are indeed some people who know what they’re doing. I’m a particular fan of what 16th Cellar Studio has done with bands like Hideous Divinity, Fleshgod Apocalypse, and Hour of Penance.

Here’s another question — I saw that the name of the new album is “Prime Incursion”. Why was that name chosen, and does it relate in some way to a concept behind the album?

Big fan myself, Stefano is behind some of the best releases around and a pleasure to work with.

The album title relates mostly to our current situation. “Prime Incursion” basically states that this is the first assault. Our first step into what will hopefully be a long run. It seems a fitting title for a debut and it sounds like a strategic move a cyborg army, plotting an invasion, would make. Which makes it even better.

Makes lots of sense. I have just a couple more questions and then I’ll let you go. I’m a huge fan of metal album art, and I wondered if an artist for the album cover has been selected yet?

Yeah, the artwork is done. Again, this was done by one of our own, since we like to be in full control of our creative ideas. Sanne van Dijk (guitar) drew all the artwork for the album by hand. This guy is an amazing artist, the things he can make with a simple BIC pen are incredible. We gave him a hard time, since you can´t just delete a layer when someone wants something different like you would in photoshop. But Sanne came through and the result is stunning, you will not be disappointed! 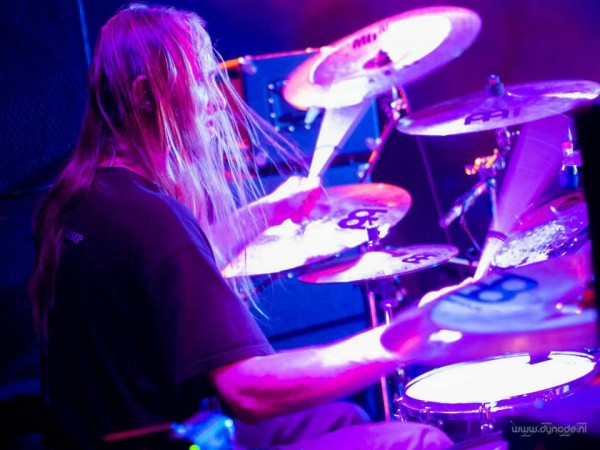 I’m anxious to see it! I will attempt to be patient. So, one last question, which is an open-ended one: Is there any other news or info about Apophys that you’d like to share with our readers?

I would say, if you are eager to see wether or not we flourish handsomely as a band, (or crash and burn…) come check us out at one of our websites. And thank you for reading!

Kevin, thank you very much for your time, and best of luck to you and Apophys in 2015.