“Eagerly awaited” is an overused and often mis-used term. How can something be eagerly awaited if you don’t know you’re waiting? But in the case of Leviathan’s new album Scar Sighted — which is due for a March 3 release by Profound Lore — it’s genuinely eagerly awaited, and also long-awaited.

And it’s long-awaited not simply because four years have passed since True Traitor, True Whore, but because it seems that Wrest (Jef Whitehead) has been through a lot of significant changes in his personal life, the kind of changes that couldn’t help but influence the music (see this interview of Wrest to learn what I’m talking about). I’ve been very curious to hear the results.

And today we finally have the first piece of music from Scar Sighted: A track named “All Tongues Toward” is now available for listening — and it comes with another piece of Wrest’s artwork for the album: 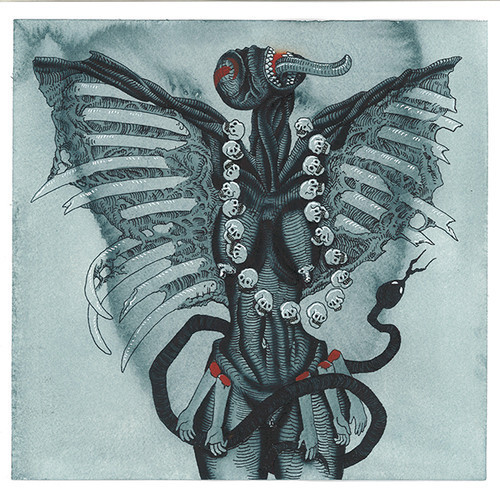 The music is dramatic and harrowing. At the beginning it reminded me of one of Johnny Cash’s darker late-life pieces, and those low, gravel-voiced spoken words reappear. But after the brief introduction, the song takes flight on wings of razoring riffs, blasting/tumbling drums, and throat-rupturing shrieks.

A gripping melody moves through the song in massive waves, picked up in places by striking keyboard notes, and the melody proves to be panoramic in its sweep and grandeur.

Now I’m even more eagerly awaiting the rest of this album — though I’ll happily give this song a lot more time between now and then.

6 Responses to “LEVIATHAN: “ALL TONGUES TOWARD””