We’ve arrived at Part 19 in the continuing rollout of our list of 2014′s Most Infectious Extreme Metal Songs. For more details about what this list is all about and how it was compiled, read the introductory post via this link. For the other songs we’ve previously named to the list, go here.

Such an overused word, “epic” is. A couple of years ago I promised one of my then co-writers that I would stop using it. Add that to the list of promises broken. If the list of broken vows weren’t already so long, I’d be disturbed by my lack of faithfulness: These two songs are epic.

I went on at excruciating length about Roads To the North when I reviewed the album. I will be more brief here. I’ll quote only a part of what I wrote after I noted some differences between this new album and works that preceded it, because it’s relevant to what I’m doing today:

What hasn’t changed, though, is Austin Lunn’s talent for writing compelling melodies that hold fast when you hear the songs and pull you back to hear them again — and this is his most melodic and instrumentally accomplished album yet. The melodies are often richly layered, with a multitude of instruments (including orchestral-styled keyboards) employed to give them added depth and variety, but even when they’re as spare as the slowly plucked strings of a banjo, they get their hooks in your head quickly and firmly.

Basically, the whole album got its hooks in my head. But this is a list of infectious songs, and so I had to pick one, and I did, and this is it — and it’s epic: “Chase the Grain”. 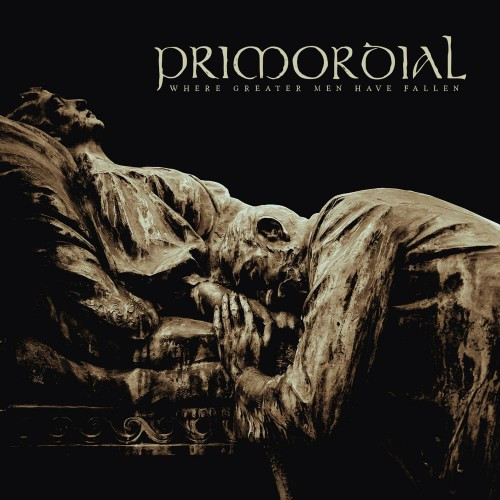 “If the world were a fairer place, then I have no doubt that Primordial would be one of the biggest metal acts in the world by now. If the world rewarded raw passion and creativity the way it should, they’d be playing arenas and selling albums by the bucket-load, bringing their majestic brand of misery and majesty to all corners of the globe.”

That’s how Andy Synn began is review of Where Greater Men Have Fallen. The world, as he noted, is not a fair place, but that does not stop us from being grateful for bands like Primordial, “who write and perform not for fame and fortune, and not to please some imagined audience, but for themselves, for the message, for the sheer cathartic joy of creation.”

If you are not gripped, moved, and shaken by this album, I’m afraid too much of you has been flattened by life’s punishments. Even if you feel as we do about this remarkable album, I’m still prepared for an argument about the song I picked from it to add to this list. Not because this song doesn’t deserve to be on this list, but because you may feel others from this album are more deserving. On another day, I might agree with you. But today, this is my choice:

4 Responses to “OUR LIST OF 2014’S MOST INFECTIOUS EXTREME METAL SONGS: PART 19”