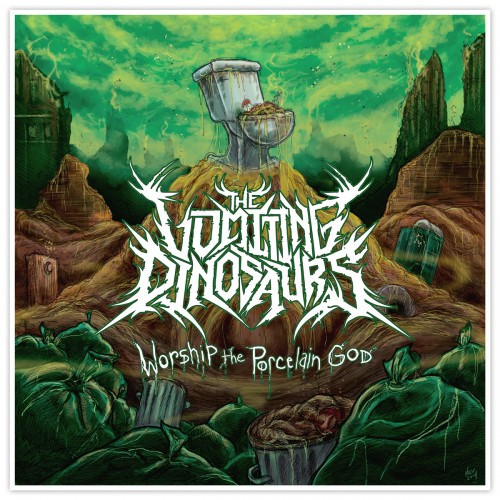 When I heard the first two tracks from the new album by Virginia trio The Vomiting Dinosaurs, I wrote that they were a blast to hear — an open-throttle, ass-kicking combo of grind, thrash, and death metal bent on ramming your head right through the wall and into the furnace next door. Now that I’ve heard the whole album, I realize that I probably under-stated the album’s impact because I failed to include some kind of reference to carpet-bombing with napalm.

The band obviously have a sense of humor, which carries over from their name and the album’s title to the individual track titles as well, but the music is punishing — in a very good way. It romps between made-to-mosh, punk-inspired thrashing,  massively headbangable grooves, and flame-throwing grind eruptions.

Twelve tracks barrel through your head in a concise 28 minutes, rapidly switching tempo gears within the songs and leaving wreckage in their wake. It’s an adrenalized listening experience that never gets stuck in a rut, pausing only at the end to cough up some hairballs.

We’ve got the pleasure of premiering a full stream of the album in advance of its February 10 release (on CD, cassette, and as a digital download) by Baltimore’s Grimoire Records. Worship the Porcelain God is available for pre-order now at Grimoire’s Bandcamp page linked below:

2 Responses to “AN NCS ALBUM PREMIERE: THE VOMITING DINOSAURS — “WORSHIP THE PORCELAIN GOD””