The head-wrecking, head-twisting grind trio from London known as Oblivionized are nearing the release of their debut album Life Is A Struggle, Give Up, and today we’ve got the premiere of an official music video for one of the new songs — “Cry Yourself To Ash”.

We’ve been following Oblivionized pretty closely, reviewing their debut EP (here) back in 2011, their second EP (here) in 2012, and one of their contributions to a split with Plague Widow in 2013 (here). They’ve already amply proven their ability to vent fury with megawatt power and technical intricacy, but this track is a good example of the band’s ability to put some interesting twists and turns into their ferocity. 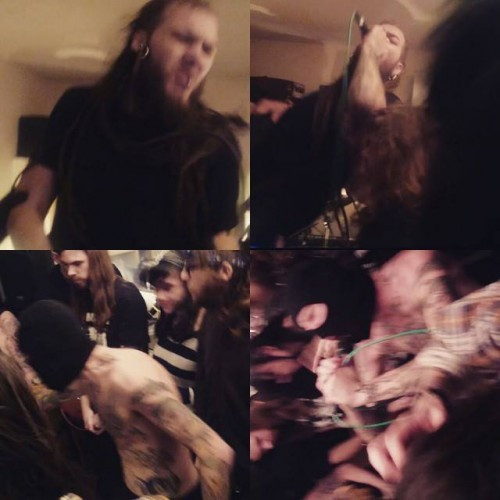 “Cry Yourself To Ash” is a dissonant, jarring, unpredictable piece that’s likely to throw you off-balance and inject an ant swarm under your skin. As much mathcore as grindcore, it’s not a high-speed race to the finish line — it’s as head-spinning as it is skull-fracturing. The video captures the band’s performance of the song at a house show.

Life Is A Struggle, Give Up is scheduled for release in April on Secret Law Records (vinyl, CD, digital download) and is available for pre-order now at this location. The cover art was created by Mark W. Richards, aka Heavy Hand Illustration (Pig Destroyer, EyeHateGod).

Before the album’s launch, Oblivionized will appear at the Burning Light Festival in Lisbon, Portugal, on February 8 and will then embark on an eight-date UK tour next month with the French band Plebeian Grandstand, who we’ve also praised at NCS. You can view a trailer for the tour created by Chariot Of Black Moth here. For the full list of shows, see below — and then check out “Cry Yourself To Ash”:

8 Responses to “AN NCS VIDEO PREMIERE: OBLIVIONIZED — “CRY YOURSELF TO ASH””