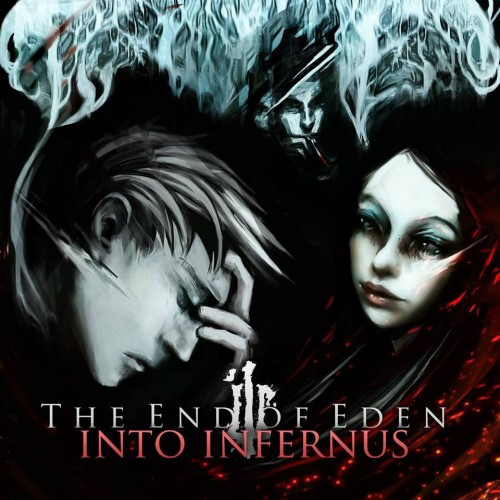 (DGR reviews the second album by Into Infernus from Tampa, Florida.)

Sometimes you come across a band via Facebook surfing after bouncing between various band pages to the point where you don’t remember where you started. Into Infernus is one of those cases for me; I’m not sure who directly pointed me to them, but I found myself enjoying enough to share — even three months out from their album’s release.

Heavy metal as a genre is one that has embraced the idea of a concept album countless times over the years. Any other genre of music can do that, and many have plenty of examples, but it feels like heavy metal has had a lot of them just due to the theatrical aspect of the music. It often feels like bands sit around with regular concept discs and go, “Alright, now what if it was way heavier”, or, as some would argue, it feels like these groups are using the cathartic aspect of heavy metal, with all its screaming, fast-tempo songs, and heavy grooves, to really tell some dark stories.

Either way, it has been interesting to see this new generation of bands whose genre styles could best be described as a goulash (or a ghoul-ash) — a mixture of just about everything under the sun, including death, black, groove, industrial, symphonic, and everything in between, creating these huge symphonic death monsters that have just a hint of black metal to them — building gigantic worlds and massive lore books and then pulling from them for concept discs.

Even when these bands are relatively unknown, they still make massive albums that are insanely ambitious, ones in which you find not only multiple characters but also three-part songs that fit in just fine alongside the usual collection of vignettes. In the case of a band like Ovid’s Withering, who got picked up by Unique Leader a few months ago, the inspiration for their worlds on Scryers Of The Ibis was largely plucked from Greek mythology, the album telling tales of gods warring with one another and the eventual results.

Mythology loans itself a ton to heavy metal, and that in itself isn’t shocking, as most myths are massive, larger-than-life tales, and heavy metal songs tend to be the same thing in musical form. Hell, if I got paid for every mention of the word “huge” and all its synonyms in my reviews, I’m sure I’d be retired in the Bahamas right now. Into Infernus, an international group of three musicians — two of whom are in Tampa, Florida and one in Ireland — find themselves following a similar path. On their mid-November 2014 release The End Of Eden, they pull from Judeo-Christian mythology and update it as well, for a tale told in modern time. 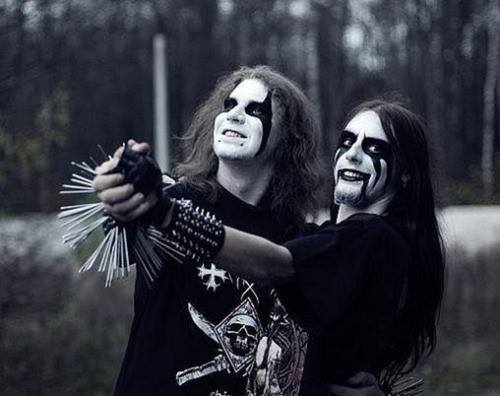 Into Infernus are one of those bands whose genre influences are too numerous to list. As noted above, the music could best be described as a hybrid of many differing strands, but we’re on the cusp of a lot of bands starting to do this, and frankly, would not be shocked to see many more in the future. However, as it stands right now, I have found that I have a taste for these sorts of albums with their grandiose movements and humongous overarching song structures; if anything, I like the scrappy ambition — the sort of not caring who gets a chance to hear the disc because you get one chance to make one like this, so it’s either go for broke or not at all.

Into Infernus’ style of music mixes a bunch of different genres together, and The End Of Eden plays heavily in the symphonic deathcore and death metal realms. There are some hints of black metal, mostly in certain movements of songs and vocal stylings, as well as the occasional and self-admitted djent-heavy groove. Naturally, that’s a lot of stuff to be packing into one sound. So, much of The End Of Eden finds the band playing with a pretty slick hand and a deft approach, one where they  dance on the fine line of a bunch of different genres at once, which will inevitably lead to the, “Are they/Aren’t they” debate. The group themselves jokingly play up the black metal aspect, having donned corpse paint and constantly posting things online as KVLT when they usually aren’t, no doubt also played up to effect by just having a song called “KVLT” on a previous release.

Into Infernus’ lineup is composed of three musicians: Andrew Zink and Eric Owen, who according to Metal-Archives are both members of the band Akeldama, and Ireland-based musician PJ McTiernan. All three contribute lyrical themes and vocal work, but most of the music seems to be coming from the Florida-based side of the band. The End Of Eden marks the group’s second full-length release in two years, following an album in 2013 called VII. 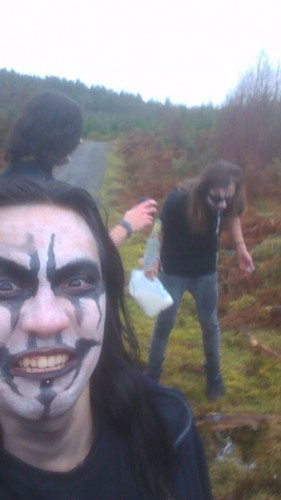 The End Of Eden kicks off in full force, after its intro song, with the second track “A Death Stalking Addiction” — one of those that follows my favorite philosophy of CD-writing, which is to have the second song be the one that begins with its foot planted firmly on the accelerator. The song sets the pace for the faster tracks on End Of Eden. It is also the one with whom people who have been following the band for a bit will be the most familiar, as it was released as a single. The vocals across the song range from a bellowing death growl to a full-blown black metal shriek, one that usually trails in at the end of a sentence and feels like it is descending upon the listener.

The following track, “Falling From The Sky”, is the one that establishes how groove-heavy the slower songs are going to be, and yes, it does contain some djent-heavy movements. But it’s not as if the style itself is bad, it’s just that so many people haven’t been doing anything interesting with it; when someone does, it actually works well, but you have to be aware of the pitfalls you can get yourself into. It certainly fits well within the confines of this song and is helped by the orchestration happening on top of the song.

Most of The End Of Eden bounces between these two styles, with some really strong symphonic work in between, ranging from being layered on top to just crashing into the song and becoming the central motif. The result is an absolutely massive album that is packed to the gills with music and things to discover.

Many discs like The End Of Eden find themselves with a similar issue, the one that comes with erecting a massive barrier to entry. Put simply, many of these albums are so big and vast that often times you’ll find that the music suffers a bit from being stretched out. Or sometimes the opposite will happen, and it seems that so much is happening that the album feels too dense. You get the sense that the music wanders a bit, and sometimes you do get lost. It is one of those times when you find that an album listen should be prefaced with a warning: “You really have to be prepared for a full disc run”. 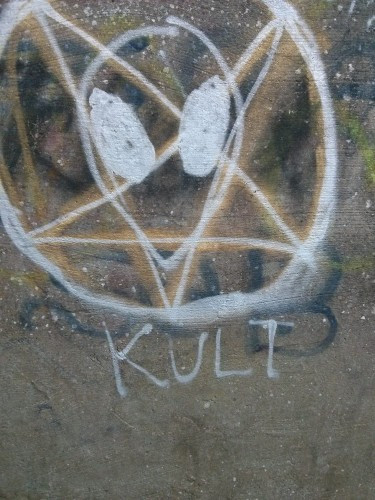 I don’t think there has been a band yet, in this vein, that has kept things interesting 100% of the time. It happened with Xerath’s III, and it happens a bit with Into Infernus on The End Of Eden. In Into Infernus’ case, it occurs during the back half of the album, where The End Of Eden’s concept really comes into play across the Eden series of songs, which are split into three parts for a grand total of about twenty-nine minutes and thirty-some-odd seconds of music — so almost a full half hour at the back half of the album.

The End Of Eden has already reached a pretty substantial length album even before you hit the last three songs, and, as I warned a few sentences before, you really have to be ready for the full album run. The Eden trilogy of songs are actually enjoyable. It’s not like they’re boring, but they are incredibly dense. On their own they run super-strong, an apocalyptic series of groove and blast sections, filled to the brim with banshee shrieks and tales of the apocalypse.

The last songs are also the one point where vocalist Andrew Zink breaks out the clean singing, which fits in alongside the grand scale of the rest of what the songs are doing — in between all of the symphonics and theatrical aspects that the band are aiming for. They soar high, but are then quickly dragged down to earth by a bevy of growls and shrieks. All three of the band’s members contribute vocals to The End Of Eden, and there are points in the last three songs where I’m convinced all of them are going at once; on top of the wall of guitars and orchestration, the group sound absolutely massive, even in their most deathcore of moments in those songs.

While the music on The End Of Eden doesn’t feel quite as woven together as I would like, it’s still a hammering slab of a second disc. That they wrote and recorded a second one in two years is equally impressive; coming up with so much material and making it work feels like a feat.

I would, however, highly recommend that you take the approach that I started taking, where you view the album as two movements. You listen to the first batch of songs, and then the moment you hit the Eden trilogy, take a quick breath and then descend back into it. I found that doing so allows you to really embrace all of the music that is happening in those last three tracks, from the bevy of guitar solos and leads to the crashing orchestration, which, while a little heavy on the brass side, still bounces up and down with a movie soundtrack’s worth of suspense.

The End Of Eden as a whole is a humongous undertaking, but one that is a genuine good time as some of the songs ascend from being mere concept pieces to full-blown stomping tracks that you can headbang around to. Yes, the musicians involved in this project have other bands, but it’s clear that they are bringing their experience to Into Infernus in spades — the songs here easily meet their ambitions and few mistakes are made.

The End Of Eden, for its somewhat misleading cover art, is a huge undertaking, a beast in musical form. It remains intensely heavy for much of its run-time and the band challenges some of the best out there in terms of tying their orchestration into their main music. While the group’s release schedule has seen them create two albums in two years, and while I will wholly own up to thinking that can burn someone out fast, the group’s material so far has been impressive.

It has taken me forever to fully digest this disc, but it is one that comes highly recommended, as repeated spins allow you to delve further and further into the story the band have crafted. For a group just getting their career kicked into gear, that is far more fun than, “Hey, here’s a collection of really good singles”.

4 Responses to “INTO INFERNUS: “THE END OF EDEN””