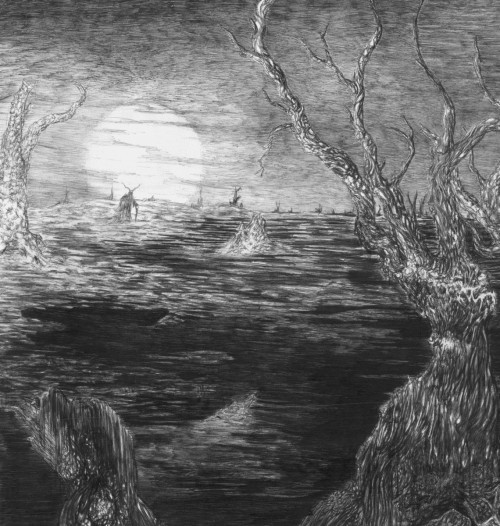 “This miry Slough is such a place as cannot be mended. It is the descent whither the scum and filth that attends conviction for sin doth continually run, and therefore it is called the Slough of Despond; for still as the sinner is awakened about his lost condition, there arises in his soul many fears and doubts, and discouraging apprehensions, which all of them get together, and settle in this place. And this is the reason of the badness of this ground.”

Some metal is made to be immediately infectious. When I began my journey as a metal fan, I would describe my metal collection that way. Immediately infectious, catchy, listener-friendly, accessible. I became a metalcore junkie in high school and that lasted into my early-mid 20s. The older I get, the less time I have to listen to music than I did when I was younger. On the other hand, I find that I have an increasing desire to explore new genres. I want metal that takes me somewhere I’ve never been before. Everyone loves a memorable chorus that gets stuck in their head for days, but sometimes you don’t want just that.

Those of you who read fiction will likely be familiar with the term “suspension of disbelief.” It refers to a writer’s ability to make you forget the line between this world and that of the story you are reading. You forget truth, reality, value judgments, and the like and you plunge right into the narrative. Of course, suspension of disbelief requires some action on the part of you as the reader. But good writing invites you to suspend your disbelief without you even being aware that you’re doing it. You will participate in the story, and not merely read it. You live the events with the characters rather than just observe them. Suspension of disbelief is just as important for the most realistic murder mystery as it is for high fantasy realms of swords and sorcery. And music has something similar. A good album takes you somewhere. It tells a story that involves an introduction, a conflict, a climax, and a resolution. It can make you feel anger, grief, joy, fear, guilt, or longing. And it can do so without forcing those feelings upon you. 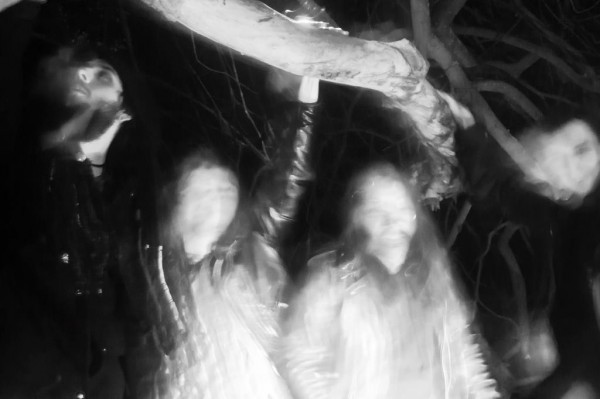 I’ve been dabbling in doom, stoner, sludge, and drone (along with their many subgenres) for a few months now. Something about this winter has drawn me to it. The early sunsets, the frost, the crunch of the rigid earth under my feet. This year, winter has been colder than usual in my part of the country. These genres just seem to fit this season. Furthermore, the instrumentation creates mood and atmosphere that works in movements rather than the usual chorus/verse/chorus blueprint. Granted, there’s some genuinely catchy doom out there polished by songwriters of supreme talent. But much of it relies on the listener to suspend his disbelief and let the music narrate its story for him. One such recent release that excels at this is Swamp Witch’s The Slithering Bog. Just prior to Christmas, I submitted Swamp Witch for inclusion in a Seen & Heard roundup (here).

Take a dose of slogging death/doom, add a helping of NOLA sludge, and slather it in psychedelia. Throw it all into a cauldron simmering in a cemetery on All Hallows’ Eve during a blood moon. Don a black cowl, chant backwards in Latin. Put in a teeny drop of blood, and there you go. You’ve got Swamp Witch. The Slithering Bog creates an atmosphere that is utterly stygian. It feels desolate, tenebrous, and gloomy. And yet, it beckons multiple listens. I’ve been listening to this record since I found out the band launched the stream. If I had to give one word to the mood that this album creates, it would be dread. A foreboding, haunting, gnawing ache somewhere between fear and despair.

First, a little history on the band. They formed in 2009, recording a live performance on 09/09/09. The resulting recording was titled, perhaps not ironically, 090909. Two songs from that album (“Gnosis” and “Emerald Serpent”) later appeared on the band’s first proper studio release, the Gnosis EP. That EP, released in 2011, garnered quite a bit of buzz on dedicated doom/sludge/stoner websites like Doomantia) According to a 2012 interview with Absolute Hell (here), Swamp Witch’s first full-length and follow-up to Gnosis has been in the works for quite some time. The Slithering Bog is the name of said follow-up. It rivals Gnosis in that it has more focus and direction. The band shaped these compositions for many months before putting them to tape. The recording, mixing, and mastering are also cleaner than Gnosis. Fret not, however. There is still plenty of filthy, fuzzy, doomy goodness left in.

Opener “Strange Cults” welcomes the listener with droning feedback and horrifying bass lines. Don’t expect any speed-picking and blast beats. This song plods and creeps along at a pace that justifies the album’s title. Frontman Jimmy’s vocals are a dense viscous muck. His howls cling like plump leeches to the rest of the music. An instrumental break beginning at the 3:20 mark would be perfectly at home in the soundtrack to the surrealist cinema of David Lynch.

“Marsh of Delusion,” the second track (and my personal favorite on the album) is the longest at 8:09. Drummer Dirk christens the slimy opus with a tribal introduction before Jacob’s bass and Ben’s guitars churn the listener further into the abyss. This track broods along like a funeral procession, steeped in miry mud. Those of you who like your metal slow, dark and heavy, will find this particular track very satisfying. In my opinion, it could have been twice as long.

The third track, “Slither Into The Circle,” is the album’s shortest track. I wouldn’t describe it as “fast,” exactly. I think “least slow” would be better. The riffage here is bouncy and begs for one’s head to nod along. “Bayou Tomb” is another album highlight for me. There is more of a drone element in this song, which to me bears traces of Sons of Otis. “Dead Root” has a grim Master Of Reality–inspired groove throughout, with an eerie and bleak usage of feedback in the middle.

“Lost Symbols,” the closer, features chilling mournful guitar leads that bode hopelessness. All of the tracks help bring the astounding, albeit disturbing, album art (designed by bassist Jacob) to life. By the album’s end, you’ll be glad you’re so far away from that ominous horned figure looming in the background. Unless of course he follows you.

My only gripe with this album is but a personal scruple — length. I really enjoy this record and it could definitely have done with a few more tracks. But again, I’m just splitting hairs. Either way, I’m looking forward to what Swamp Witch have in store for us next.

The Slithering Bog is available for digital purchase on Bandcamp (for only $5 I might add) in advance of its 02/20 release date via Transylvanian Tapes.

Bandcamp (Where the band’s first 2 releases are only $3 each):