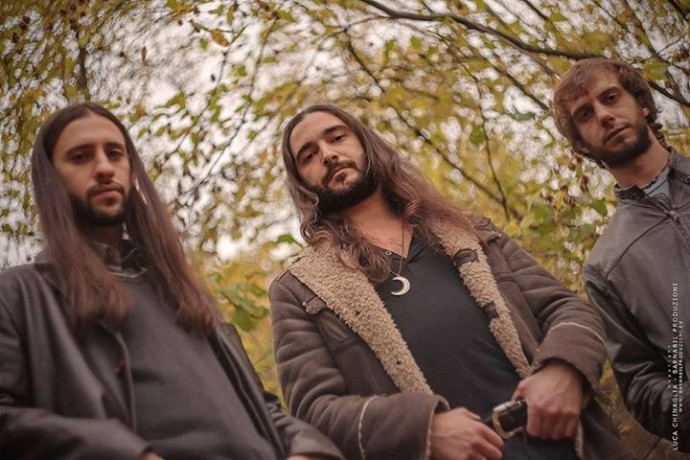 Take the map of Italy and find the small town Vaghera in Lombardy. Do you see it? It’s there in the North… Yes, that’s right. It’s a place where the Maserati Brothers were born, four gentlemen who created what has become one of the world’s best luxury sports cars for a long time. But today this place is more interesting for us because of Doctor Cyclops; they’re a trio who have been playing pretty original retro doom rock since 2007. Their songs have a unique Italian touch – some prog elements, something from the atmosphere of Argento movies, and something elusive and really fresh. And they are not as simple as one might think.

I had this interview with Christian Draghi (guitars, vocals), and we discussed their two albums Borgofondo and Oscuropasso. After that I have even more respect for the band. So here he comes – Doctor Cyclops.

Hello Christian! How are you? What is the current status of Doctor Cyclops?

Currently the band is in a shamanic retreat to write songs for the new album. It means that we are not playing gigs at the moment, but just focusing on the ritual of composition.

What did you and your bandmates have in mind when you gathered as Doctor Cyclops for a first time?

Getting rich and famous! Eh eh… actually we were kinda schizophrenic: one side would have been happy just to play gigs in front of an audience… the other wanted to write not just music… but to create “The Definitive Art Piece”. Both humble and megalomaniac I’d say.

What was your side in this discussion? What do you prefer – to compose or to play it live?

Of course playing live is much more intense… but you know, there would be no live without composition… How can you choose? They are both intense feelings even if really really different form each other.

How do you understand this phenomena – it seems that Italy has a really unique scene with good taste, considering such things as hard and progressive rock as well as the stoner scene…

I’m sorry, I wouldn’t want to disappoint you… but I don’t even think the Italian “scene” exists. We do have really good bands, most of them from the past (the prog era was late ’60s early ’70s)… but nowadays it’s hard to me to deal with a definition like “Italian scene”. Probably you don’t have any idea about how hard it can be to get a decent gig in our country. Unless you are cool enough (which means, for the average Italian stonerhead, that you come from Sweden, USA, or Germany and that you are signed with a big label), it doesn’t really make sense for you to play here. It won’t grow your name or change anything in your status. Better to go a little bit more north: Switzerland and Austria are way better. 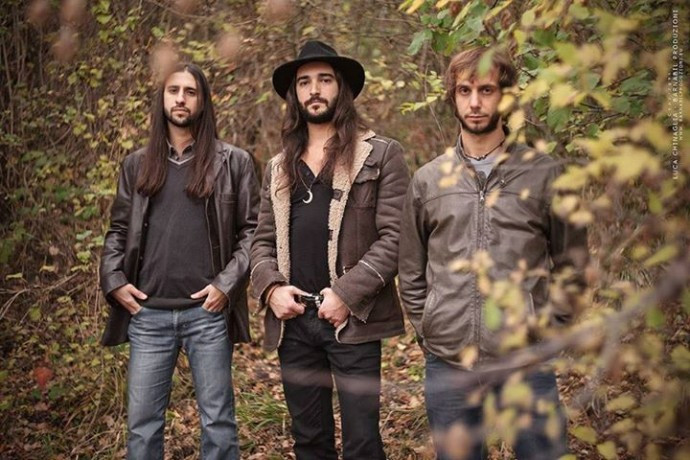 Well, but there’s a lot of modern perspective bands of this kind  – Black Capricorn, Black Oath, Caronte, Doomraiser, Krownn, Midryasi. There’re also old school bands like The Black and Abysmal Grief. Do you mean that there’s no interaction between bands, labels, and listeners?

A bit of all of this… Bands are not really cooperating, and so for promoters and labels. Most of them just take care of their own little garden. I don’t know if they’re to blame or not for this, my point is that this doesn’t help building up any scene. Without people really interested in music there is no point for most of the bands in playing Italy. I guess it’s also a bigger cultural problem we are facing here…

I wonder what does the band’s name mean? Were you inspired by some movie?

Everybody thinks so, I know. But when we chose the name we didn’t even know about the sci-fi movie. It came through a phone call between me and Francesco, bass player and other former member. We thought that the word “Cyclops” had a good rolling sound and was at the same time evocative of magnificence and loneliness, which fits really well to a doom/rock band coming from the mountains… “Doctor” is because Francesco just took his degree at the time. Graduates need to be called “doctors” 😉 But I think that the existence of the movie is a great and positive coincidence: We do love cinema, especially B-movies or weird ones. Lots of inspiration came through them.

Both records of Doctor Cyclops have really strong and catchy songs. How would you describe the process of composing in the band?

I wouldn’t talk about “catchy” songs. Apart from a few, most of the structures are kinda complex and articulated… we do have catchy parts, I’d say… catchy riffs probably… but thanks, anyway! About the composing process… normally one of us between me and Francesco brings a new idea in… usually some riffs, or part of a song. Then we work on it, we play it, and we finish it together or at home. When the structure takes a decent shape we keep on working on it, we add a melody and lyrics. The process used to be kinda long. Lots of “labor limae” if you get the Latin words. It’s really rare to see one of us coming in with an already finished song. Maybe it’s because we understood we can complete each other… or maybe because we are too lazy, I don’t know! Maybe both…

Excuse me, I didn’t express myself clearly. You have cool riffs – it’s a fact, but the whole atmosphere, with a mix of progressive and psychedelic influences, is very attractive in itself. May I ask you about influences? By the way, do your surroundings and Italy’s cultural background influence you, as well as some modern elements like popular Italian horror movies? Or retro music? You have that cool tune with flute, sax, and trumpet  in “Giants of the Mountain”…

We like many different things, of course we like mixing music and cinema when it’s possible. You know, like in Dario Argento horror movies with the Goblins themes… we like creating something theatrical, too, with music. Our influences go from the obvious to the niche. Black Sabbath and all of that stuff, then Captain Beyond, Witchfinder General, Truth and Janey… Firebird, Witchcraft, Graveyard, Cathedral, Pentagram, Gentle Giant… Heavy ’70s underground and obscure rock… with a taste of progressive and psychedelic I’d say.

By the way, how did you get Alia O’Brien of Blood Ceremony on Borgofondo?

We simply asked her. We played with them and she liked the stuff. Nice and easy. Sometimes being in the underground scene has its benefits! 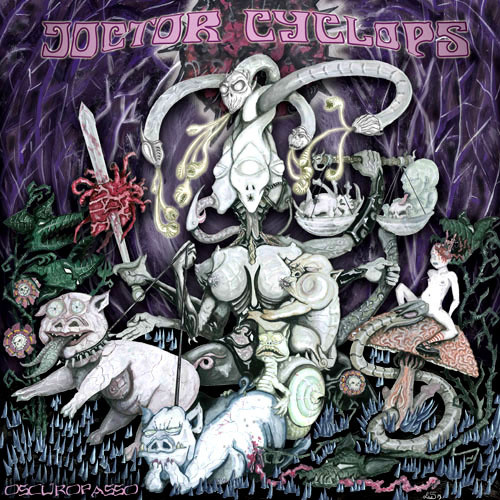 Your second record Oscuropasso has some crazy elements in the songs and in the CD’s layout that make me wonder if you have a friendship with the magic world of mushrooms… So where did you find such an insane inspiration?

We never took acid or mushrooms. Weed, wine, and beers are the strongest drugs we ever had. The general concept came to Francesco’s mind while we were writing the first song of the album, “Waterfalls”, which contains the lines about a justice statue and human-kinded pigs… It’s a perverted cosmogony… it well represents the dirtiness and obscenity of the world we are living in. We communicated this concept to a friend of ours, Luca Sambuco, who is a really great illustrator… he took inspiration and he drew what you can see.

The second album Oscuropasso has a really disgusting — with all my respect — artwork illustrating the song “Rotten Trolls”. It reminds me of both Bosch paintings and Cathedral front-covers. How did you decide to use it?

I’m glad you find it disgusting, as it’s exactly what we expected it to be. Bosch and Dave Patchett are both important references for us, you got them right. That drawing was made by Luigi Filippini and illustrates part of the lyrics of the song “Rotten Trolls”, the lines going like “the lady takes her clothes off and hangs them to a glory hole”. That song is a suite made like a sort of comedy-drama talking about a fight between humans, goblins, and (rotten) trolls.

We took inspiration from a famous Italian writer of the XIX century called Giacomo Leopardi. He wrote a satirical piece called “Paralipòmeni della batracomiomachìa” which talks about a battle between frogs and rats as a metaphor of Risorgimento’s revolts. We gave our version of mankind’s obscenity through this song. And I’m glad the “Rotten Trolls” illustration is “disgusting”… 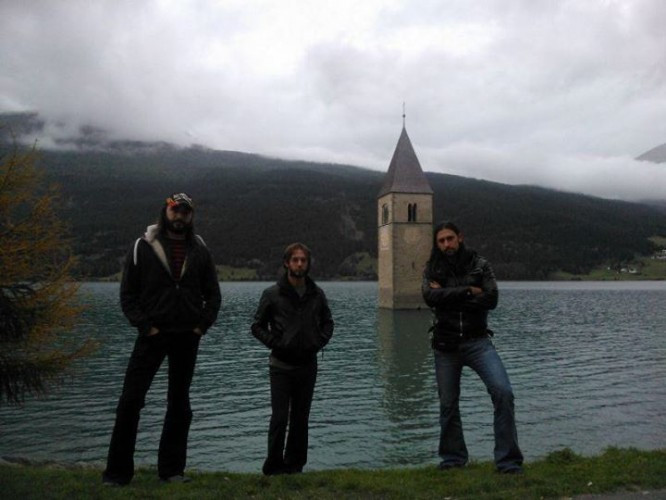 Can you remember what drove you to compose this song and write down those lyrics for it? What was created first — lyrics or music?

Music came first. Then the general concept. Then the lirycs, if I well remember. We’ve been writing that song for at least 3 years! We sketched the first draft in 2009 I guess… then we worked on it from time to time through the years without hurring up the process…

Christian, I didn’t expect such a turn! I mean that song’s conception looks clearer now and I can see it from a different angle. Though I bet that t-shirts with that picture will not be popular among your listeners. But anyway, what are other songs from Oscuropasso about?

Ahahaha… too many different things… But I can say that we mainly try to tell a story about some lonesome or freaky character, as we did with “The Monk”, or “Angel Saviour in The Cannible House”. “Cobweb Hands” is more like a sweat nightmare. “”Waterfalls is a sort of Borgofondo’s concept sequel. A darker place where the badasses had been pushed to suffer retaliation…

I see that you did avoid some stoner/doom clichés. What do you think about the overindulgence with the genre’s trends, such as bong, Satan, witch, and so on?

I guess It’s easier to build up an identity stealing words here and there from the common imagery than doing it with something more…original… but I find it really kitsch. I think the world doesn’t need another band called Bong-something at all! 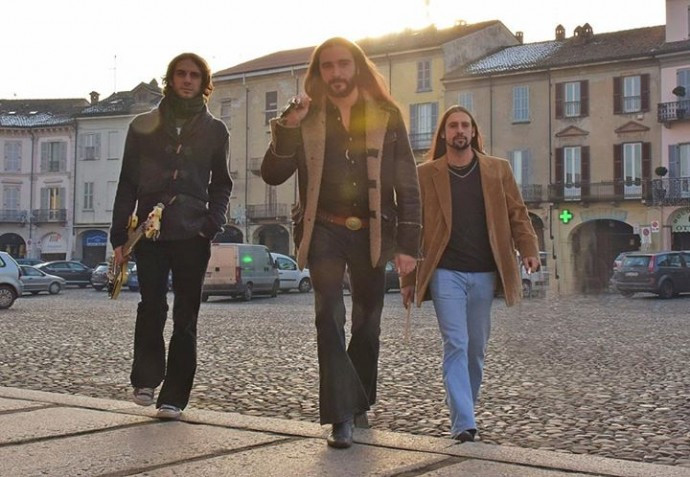 What do you plan to achieve with Doctor Cyclops now?

Growing bigger in the scene with the third album we are currently working on… then making money, wasting it all, and then dying before getting old!

Thanks for your time man! This interview has helped me to understand the band better, so I’ll wait for another album patiently. Good luck and all the best.

Thank you! Support the scene, and love the Cyclops! Doom on