We discovered the existence of Alkaloid quite by accident last July after learning of the departure of Christian Muenzer and Hannes Grossman from German technical death metal overlords Obscura, and wrote about them at a time when not much information had been publicized — but what was known was certainly enticing. In the months since then, the reasons for excitement have only grown. This supergroup’s debut album The Malkuth Grimoire is now set for release on March 17 — and today we bring you the premiere of its title track.

The word “supergroup” is overused, but it’s entirely justified in the case of Alkaloid. The band’s members have histories with an impressive list of groups: 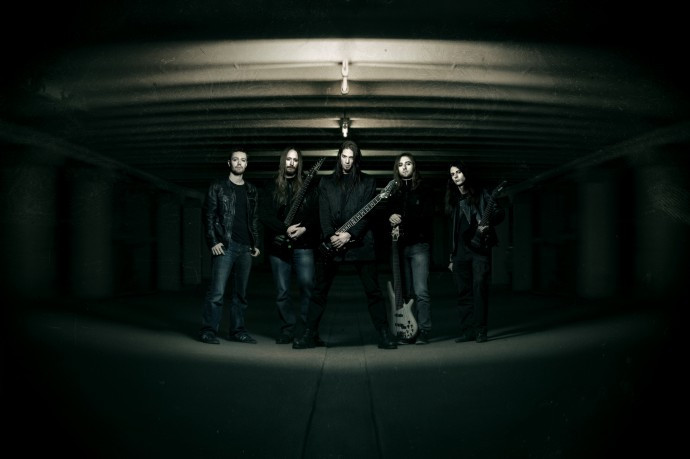 Their 73-minute debut album is an entirely DIY effort. It was financed through a successful crowdfunding campaign, produced by Alkaloid, and recorded by Hannes Grossmann at Sound-of-Mordor Studio in Nuremberg, Germany.

As for the song you’re about to hear, NCS writer Austin Weber has a few enthusiastic observations:

From the onset, the track explodes like a supernova, igniting a shimmering explosion of guitar pyrotechnics, hellish growls, and decimating drum beats. Yet from its explosive beginnings, the belly of the song evokes a crushing, groovy, Morbid Angel stomp, not dissimilar to the slow-motion massiveness explored on “Ocean Gateways” by Obscura.

A procession of rapid and snaking solos follows from this deathly doom, soon hitting an atmospheric stride of celestial wonder, abounding in dark melodies and a backing flurry of leads. Soon after, the track doubles back into a furious aggressive jaunt before slowly getting quieter and dissolving into the aether.

Quite a dense track indeed, one that showcases a new merger between death metal and progressive elements spun into a vortex of impressive creativity.

11 Responses to “AN NCS PREMIERE: ALKALOID — “THE MALKUTH GRIMOIRE””