(DGR reviews the debut EP by Aetherian from Athens, Greece.)

Oftentimes, when a writer disappears for an extended length of time, the writer will usually return to the fold — because really, the muse is always calling, siren song being strangled from her (because really, we have to METAL around here) — with tail tucked between the legs, bevy of excuses in hand (most pretty valid), ‘aw shucks’ look on the face, and full of apologies, ready to be welcomed back with grand plans and a ton of material to work with.

I can’t do that this time. I disappeared because work kicked my ass. It’s been a well-known fact that NCS is a labor of love and it is our passion (and that of many others) that keeps the site running. We happen to be in a very blessed position where we don’t have to worry about ad-buys and traffic, and therefore we can sort of freely write about what strikes us. But our amateur status also opens up the scenario in which actual real life takes over, and for about a month and a half I was the aforementioned single digit that was being smashed into dust on Napalm Death’s Apex Predator.

I literally did nothing but come home from work, fall over — sometimes on a bed, other times on the floor, couch, and in one case the bathtub — and go to sleep, wake up, and drag-ass back to work. Such is the nature of my job, but it also distracted me from music listening, and honestly, trying to come up with any sort of coherent thought has been a very difficult endeavor. So, I disappeared and for that I am sorry, but now it’s all over. Work is slower and at a more routine pace, it’s sunny and about seventy outside, things are looking up, and the last few checks haven’t been half bad.

So what I’m saying is fuck all of that shit, let’s depress ourselves. 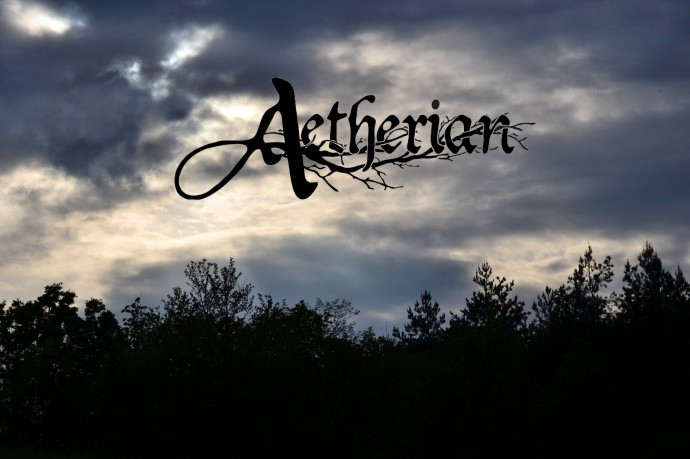 Actually, let’s walk back a couple of steps before we fling ourselves off the edge into the vast maelstrom below. If you’ve been following NCS over the past year, you’ll recognize the name Aetherian almost immediately, as we’ve been covering and salivating over every step this project has taken since Islander first began covering them early last year.

The group are part of a recent wave of melodic-death/doom metal bands that fall heavily into the same camp as groups like Insomnium and Daylight Dies. They’re largely introspective and brooding, while being frighteningly precise at creating ethereal landscapes in their music. No matter where such bands are from (case in point, Woccon are from Georgia), they are always able to call to mind the frozen lakes and desolate snowy fields of the northern expanses. If you’re the type who is able to relate a color to music, the predominant one would have the be the colder shade sof blue.

Aetherian are a two-piece band hailing from Greece, comprising musicians Panos Leakos on bass and vocals, whose other band Mist Of Nihil I have covered before, without being aware that he was involved in this band, and Aggelos, who is the man in control of all things guitar on this disc. The group’s debut EP, Tales Of Our Times, was released at the tail end of January, which unfortunately was right in the period where just about every single writer for this site was having their ass summarily beaten by life and work.

Listening to Tales Of Our Times, you get the sense that for Aetherian this brand of cold doom that is recognizably European comes naturally for them. The songs are more up-tempo than most, which is where the band find themselves drawing comparisons to groups like Insomnium, but the sound is still slow and depressing — with the clean notes plucking soft melodies out of the air over the crashing waves of music behind them.

It feels like we’ve been following Aetherian, since the moment when they first had material to post and we have shared as much as they’ve put out — so if you’ve been a reader of NCS, a pretty good chunk of Tales Of Our Times is going to sound familiar to you, at least in spirit. It is the summation of everything the band have done in their short life-span, and save for a short intro, the tracks on Tales Of Our Times run a pretty good length for a doom album — about six-to-seven minutes each. Aetherian, of course, are juggling plates, as the band have made their aspirations as a proper melo-death group clear, and the music on Tales Of Our Times is up-tempo, but it’s also clear that there is some DNA from its members’ other projects, and that works in the band’s favor.

Aetherian are able to make the time pass like nothing, even though their individual song lengths are up there. That said, the music on Tales Of Our Times is a bit slower and more introspective than the band’s previously released material. I don’t think any song on this EP matches the super-fast pace the band mounted on their earlier single release, “Drops Of Light“, for instance. It gets damned close for some good chunks of the material, but not an entire track in the way that song did. Instead, Tales Of Our Times lets off the accelerator and fully embraces the misery surrounding it, and as a result it feels like a lush tour through colder reaches, and for me personally feels a bit like returning home.

From a listener’s perspective, “returning home” is an interesting idea and one that I think tends to have a lot of effect on our opinions of things. I’ve played with the idea before, but in a nutshell it is that we as listeners tend to find your own comfort zones musically, and those become the spots you relate to, the ones where you have the most familiarity, and after a while, the ones where you start to find yourself building a nest of different bands and musicians — you almost make it into a home to return to.

For instance, I’ve made no attempt to hide that I absolutely love this sort of cold, half-melodeath/half-doom, European take on the genre that seems heavily entrenched and focused on melody; many of my favorite bands tend to exist in this sphere. It helps explain why Aetherian have such a huge gravitational pull on me. The group aren’t intent on breaking genres. Instead, the members have made it clear the space that they’re aiming for, and they land squarely within it. It’s in these defined boundaries that Aetherian operate, and that may raise the larger argument of whether or not defining boundaries for yourself as a musician can make you more or less creative.

For some, having them exist and then finding ways to contort yourself around inside of them can present a challenge — and likewise a sense of fulfillment — as you explore ways of writing another great song in a seemingly crowded sphere. This is where Aetherian are currently excelling. They’ve managed to force their way into a crowded genre just as it seemed as if the initial ripples were causing hundreds of bands to pop up, and with Tales Of Our Times have made themselves into a flag-bearer.

Album opener “Whispers On The Wind”, a two-minute intro, is basically your guide into these frozen reaches, as its melodies slowly fade in and out, softly strummed at first before beginning to weave their way into some of the motifs that will be carried on into the EP’s first true song, “As Seasons Pass”, which is one of the first real tests of Aetherian’s sound. It’s a song that is atmospheric as can be, building a soundscape of guitar layered over guitar, and about mid-way through the song’s pace picks up — bringing the band into a pretty firm Gothenburg two-step riff.

“For Those About To Fall” feels like it was written around the same time, misery reserves still fully intact. The two songs are like a one-two combo, and in a way like two sides of the same song. Both are tunes that rely on a faster mid-section and bounce between that and a glacially slow opener, where the melody chills to the bone and coats the whole song with ice. “For Those About To Fall” is two minutes shorter on the time spent, but Aetherian make time vanish like nothing on Tales Of Our Times.

The title song opens acoustically and slowly, the band spending the first minute of the song bathing the listener in atmosphere before picking things pick up bit. It’s one of the slower-moving songs on this EP until about halfway through, but the opening segment of it is absolutely crushing before the guitar moves into a buzzing and heavy riff that keeps the song moving more quickly until its end. While the main rhythm of the song is pretty basic, the riff with which Aetherian chase each couple of verses is an intricate and note-heavy break. When the band finally resurrect the opening part of the song from its hibernation, the whole song wraps back around into itself, weaving everything together and pretty much highlighting why this one wound up being the title disc’s song.

“Dreary Voices”, however, takes the themes of its predecessor and slows them way down,  becoming the doom and death song of the disc, almost suffocating at times until the band let you take a clean breather halfway through.

Rarely has the death metal description of vocals as “belching fire” ever sounded more apt than when applied to Panos Leakos, whose death metal roar is stunningly low for this style of music. He alternates between that super-low roar and a whisper on much of this EP, and the songs are driven forward as he matches his grunts to the up-and-down rhythms of the music. It’s very different from the vocals that are usually applied to this style, which tend to be of the anguished yell-and-growl style, and it’s an interesting take on the sound. There’s not much anguish in his voice, but he instead fills the songs with monstrous bellows and grunts barked out to the music.

The guys clearly know their way around this style of music, because they seem to bring out every single trope of this style in full force — which is a dangerous game to play. Doing that, you often risk becoming predictable, but Aetherian are able to keep things dynamic and interesting.

In some ways, I feel like we should be terrified that Aetherian have figured out the formula to make damned good music like this because they could probably make a mint selling it to people who are looking for the secret of how to make their own music sound like this. They’ve figured out the echo-effect-heavy guitars, the crushing rhythm section, the low howls and yells, the synth atmosphere, the tunings — basically everything on Tales Of Our Times feels like a class on how to make a disc in this style of music. It is an EP that can make the skies on a nice day darken and become a harbinger of the rain to come. Aetherian’s EP is an impressive debut and another notch entry in the ranks of amazing metal bands from Greece.

3 Responses to “AETHERIAN: “TALES OF OUR TIMES””