I realise I may be in the minority about this, but as much as I enjoyed The Epigenesis I still felt like there was something missing in the final package. Though it certainly broke new ground in terms of adding an even more progressive, expressive edge to the band’s sound, to my mind it lacked a certain fire, a certain ferocity, when compared with their previous releases.

However it’s now been five long years since the release of The Epigenesis, five years which the band have spent (metaphorically) wandering in the wilderness, losing long-serving members and regaining old allies, perfecting and purifying themselves once more, engaged in a penitent pilgrimage which has led, ultimately, to the creation of perhaps their finest album yet. 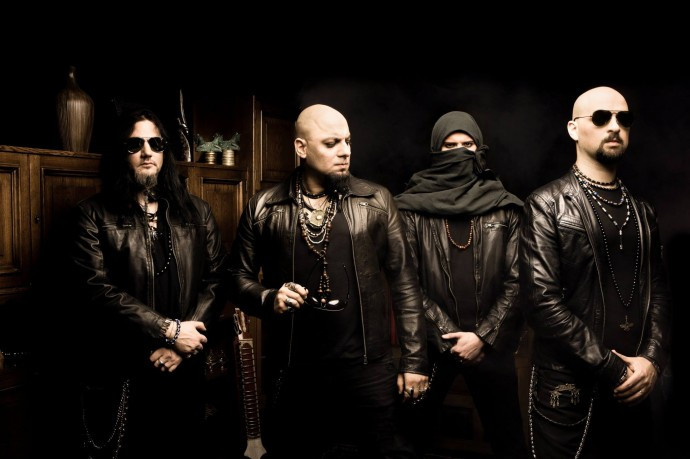 That Enki is a heavier, more antagonistic affair than its predecessor is undeniable, the band’s revitalised line-up — mainman Ashmedi rejoined here by guitarist Moloch, original drummer Lord Curse (whose furious footwork, strafing fills, and scathing blast-beats are a major highlight of the album), and new bassist Scorpios — pulling out all the stops and injecting the album with an extra shot of extremity and focussed metallic power.

From the sand-scarred maelstrom of opener “Temper Tempest Enlil Enraged” with its firestorm of blistering blast-beats and scything riffs, to the whirling dervish of “Lost Tribes” (which even a guest appearance by Max Cavalera – whose Cro-Magnon bellow plays off nicely against Ashmedi’s venomous snarl — is unable to ruin), to the titanic stomp and slicing, scimitar guitars of “Enki Divine Nature Awoken” (another song elevated by a well-chosen guest appearance, in this case the imperious blackened bark of Rotting Christ frontman Sakis Tolis), the fearsome foursome hack and slash and pummel with primal focus and intensity, as if possessed by violent and restless spirits.

Yet the album is more than just a simplistic regression towards aggression, and the lessons learned on The Epigenesis have not been forgotten. Tracks like the shape-shifting “The Pendulum Speaks” and the nimble “The Palm, The Eye, and Lapis Lazuli” dance effortlessly along a razor’s edge between shimmering melody and shuddering metallic groove, while there’s even a hint of Master of Puppets-era Metallica to the magisterial hooks of “Multiple Truths” and the scorching Black Thrash attack of “Metatron and Man” – though whether this is by accident or design I simply don’t know.

Yet the album’s greatest strength, beyond even the cunningly compelling song-writing and punishingly powerful performances on display, lies in the near-perfect manner in which all these elements – the esoteric melodies, the blackened metallic ferocity, the unpredictable twists and progressive, serpentine contortions — are combined.

The balance and interweaving of all the band’s influences is nigh-on seamless, binding them all together into a singular totality of style and sound, epitomised by the bombastic Babylonian grooves and swirling Mesopotamian mysticism of epic closer “The Outsiders”, which strives to unify the album’s grandiose vision and brazen ambition in one fantastic finale.

Ultimately, no matter how you feel about the band’s previous album, it’s hard to deny that Enki represents a new dawn and a new level for Melechesh.

It’s a dense and endlessly fascinating listen, one which undoubtedly makes an instantaneous impact with its whirling dervish dynamics and feverish aggression, yet which also rewards the dedicated listener with artfully concealed layers of cryptic meaning and hidden secrets, all waiting to be unearthed.

Enki is out now on the Nuclear Blast label and available for order here.