Earlier this month we premiered a new song by an Indian band named Dormant Inferno that’s scheduled to appear on a split release entitled Beyond Forgotten Shores with a Pakistani band named Dionysus. I intended to follow that with a premiere of a Dionysus song, but in part because of my fucking day-and-night job and in part because I’m an idiot, I didn’t follow through on that plan — and now, the Dionysus tracks on the split (along with all the Dormant Inferno tracks) are up on Bandcamp for listening in advance of the split’s official release.

This new split is the third release by Dionysus, following a 2012 EP named Hymn To the Dying and a 2011 demo. Their two songs for the split are “Beneath the Skies of War” and “Rain”. The music is difficult to classify in simple genre terms, as it blends elements of black metal, doom, death, thrash, and progressive metal. If you fear that the music might sound cluttered with so many stylistic ingredients in the mix, rest easy — it works beautifully.

There is an impressive level of sophistication in both the songwriting and the instrumental performances. Both songs are intricate, richly textured experiences, embedded with melancholy melodic hooks that are quite memorable, and they are just as often atmospheric and transporting as they are rocking and ripping. Both tracks also include meditative acoustic segments that add further depth and character to the music, as well as beautiful, soulful guitar solos (the one in “Rain” is especially eye-opening). Impressive, and strongly recommended.

Beyond Forgotten Shores is scheduled for release by Transcending Obscurity India on April 7, with painted cover art by the label’s owner Kunal Choksi, and it’s available for order at the links below.

You can find Dionysus on Facebook here, and their debut EP Hymn To the Dying is on Bandcamp at this location.

Three days ago Ungodly Ruins Productions released a lyric video for a new song named “Rex Mundi” by an Italian band named Demiurgon. The song comes from their debut album Above the Unworthy, which was mixed and mastered at 16th Cellar Studios by the masterful Stefano Morabito and it features cover art by the masterful Pär Oloffson.

I wasn’t familiar with Demiurgon (whose line-up includes members of the brutal death metal band Unbirth and the black metal band Darkend), but I checked out the video on the recommendation of an Italian friend (Tito), who has never steered me wrong — and he still hasn’t.

“Rex Mundi” is a decimating death metal assault, shot through with stinging riffs that swarm like a hive of angry hornets and anchored by a spine-shaking rhythm section. The music mixes brutal grooves, eye-popping technicality, and harsh vocals that sound like a rabid mastiff coming for your throat. “Rex Mundi” is perfectly calculated to get your adrenaline flowing in a flood.

Above The Unworthy” is due for release on May 15. 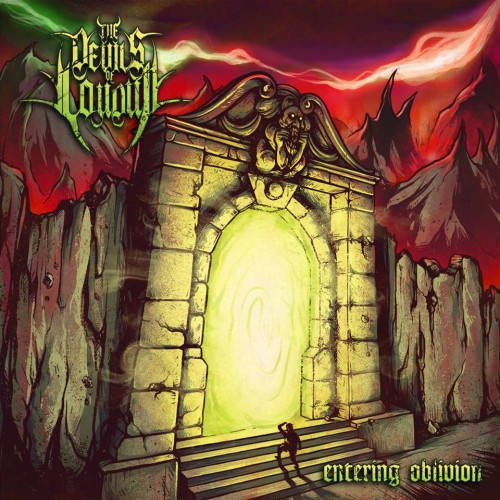 The Devils of Loudun are a Seattle-area band whose live performances I’ve enjoyed on multiple occasions. In late February they released their debut EP, Entering Oblivion, which is available on Bandcamp, along with a lyric video for a song named “Guise of the Deceiver”. I’ve been meaning to give the EP a proper listen for weeks, and still haven’t managed to do it (see above re fucking day-and-night job). But this morning I did check out the very cool lyric video — created by James Furrow (ex-Blood and Thunder).

“Guise of the Deceiver” is death metal that hammers and shimmers, jabs and twists, explodes and swirls. By turns, it’s bombastic and head-twisting, with jet-fueled fretwork, well-placed symphonic overlays, a contrasting piano-and-bass interlude that comes out of left field, and flesh-rending vocals. It will get your head moving and your brain spinning. Check it out below — and I’m also including the Bandcamp stream of the whole EP.

3 Responses to “SEEN AND HEARD: DIONYSUS, DEMIURGON, THE DEVILS OF LOUDUN”