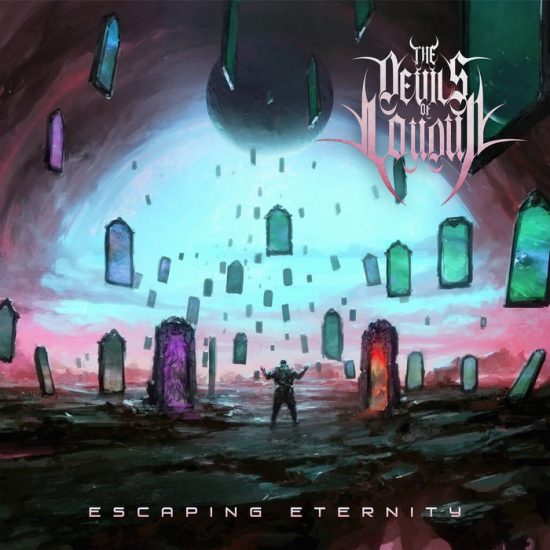 (We give you DGR‘s extensive review of a new album by The Devils of Loudun from the U.S. Pacific Northwest. It was released last Friday by The Artisan Era.)

This is stating the obvious but the first full-length from Seattle, Washington’s keyboard-heavy tech-death crew The Devils Of Loudun feels like it has been a long time coming. The group landed on my personal radar in the mid-2010s around the time of their year-over-year EP releases in 2015 and 2016, and yet since then its been quite the wait for their album Escaping Eternity – out now via The Artisan Era.

Escaping Eternity puts the band in an interesting position. Their brand of neo-classical tech-death shred has become a specialty of their current record label and as a result has them standing side by side with quite a few cohorts. Like releases by many of their label-mates, Escaping Eternity is also a thickly packed album; with nearly seven years between releases The Devils Of Loudun have used what seems to be all of that time creating music – resulting in a ten-song release that pushes close to an hour’s worth of songs. END_OF_DOCUMENT_TOKEN_TO_BE_REPLACED

Earlier this month we premiered a new song by an Indian band named Dormant Inferno that’s scheduled to appear on a split release entitled Beyond Forgotten Shores with a Pakistani band named Dionysus. I intended to follow that with a premiere of a Dionysus song, but in part because of my fucking day-and-night job and in part because I’m an idiot, I didn’t follow through on that plan — and now, the Dionysus tracks on the split (along with all the Dormant Inferno tracks) are up on Bandcamp for listening in advance of the split’s official release. END_OF_DOCUMENT_TOKEN_TO_BE_REPLACED