(Wil Cifer provides some thoughts about the new album by Sweden’s Tribulation.)

Up until this point Tribulation has been a more fascinating creature on stage. The Children of the Night carries those wandering moments of majick the band summons on stage and transfigures them into a more solid form.

Often the album trades the traditional metal crunch for a more multifaceted organic tone that just happens to be played loudly. This is very much a guitar-centric album. The riffs are more than hammers that pound your head until you begin banging it, but tools to entrench the dark melodies into your hungering ears. On first listen, certain songs have the brighter epic metal tone that might cause Enslaved comparisons to abound, but the band is setting the stage for something more sinister lurking under the surface, while Enslaved sails their prog power longboats into Norse lore. 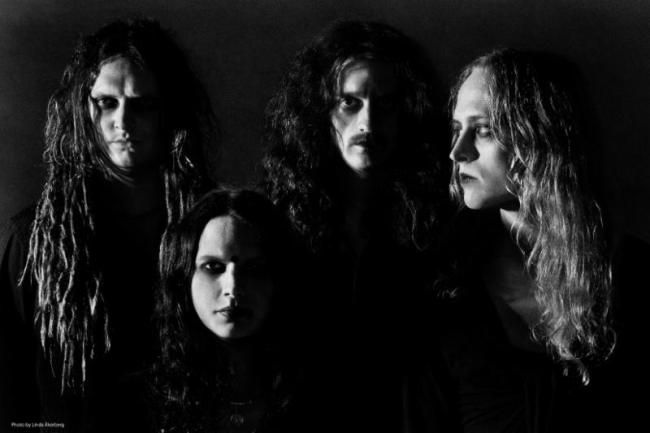 This canvass is painted in a wide spectrum of guitar tones. The band continue to embrace their signature sound, they are just painting it with different colors. Some of these are more trippy than others. The drums and vocals  take the most traditional metal roles in the band, allowing the guitars to venture out to the fringes. The guitars still have bite to them, even in their most beautiful moments. Songs like “Winds” find a balance of attack and sonic wonderment. Some of the punches are in a more Iron Maiden vein of metal than some of the old Morbid Angel influence that haunted previous albums. The bass player makes some interesting choices as he ventures higher up the neck. This traditional NWOBHM approach returns on the melodic “The Motherhood of God”.

Aside from the rasp of the vocals, you would not think of this album as being death metal, even in the most progressive sense.The vocal rasp has much more in common with black metal than death metal here. 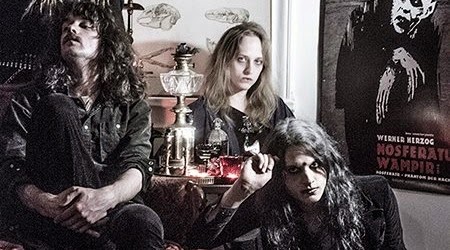 The first really dense metal tone comes when “Sjalaflykt” kicks in. It doesn’t take long before the song is bathed in atmosphere. The expand-and-contract nature of the arrangements gives ample room for them to play around with ideas. They do this without boring you with 10-to-15 minute songs; they are instead very concise. Sometimes they do allow a song to reach close to the half-way mark before bringing in the vocals, which seem to have less emphasis placed upon this this time around. Sometimes they are omitted altogether.

They dive deep into the darkness with “Strains of Horror”. If you ever wondered what it would have sounded like if Deep Purple had written the soundtrack to The Exorcist, here is a pretty good stab at it.

I enjoy a good guitar solo as much as the next guy, but it’s rare when they really add as much to an album as they do here. There is a stronger sense of metal majesty to the guitar duel that is “Holy Libations”; that is a guitar player’s wet dream.

After the interlude, “Cauda Pavonis”, Tribulation bring the album to a pounding finale with ” Music From the Other”, which has a very Watain-style pummeling to it until they back off and let loose the dreary melodies.

This is another step forward for a band who continue to grow with every album. They blend the more classic metal elements in with their more ethereal colors with ease.

The Children of the Night is due for release on April 20 in Europe and April 21 in North America via Century Media. It can be pre-ordered here. Certain formats will include two bonus tracks. The cover art was painted by guitarist Jonathan Hultén, who also created the band’s previous album covers.

3 Responses to “TRIBULATION: “THE CHILDREN OF THE NIGHT””