Malthusian’s debut demo MMXIII (touched upon here at our site) was an auspicious start to their career, but they have taken significant strides forward on their new EP Below the Hengiform. It would not be hyperbole to say that it now places this Irish band among the elite ranks of blackened death metal practitioners on a global stage.

According to this recent interview of the band’s guitarist/vocalist, the “hengiform” referred to in the EP’s title was an Iron Age enclosure, a “ring fort” in which there is archaeological evidence that ritual sacrifices were performed, “like a gateway between the worlds of the living and the dead”. With that obscure yet evocative reference as the banner above this new recording, Malthusian have created a listening experience that suits the title: The music is obscure, ritualistic, and supernatural in its aura, and it introduces something new to the lexicon of extreme metal.

From the beginning, Malthusian have blended elements of doom into the formulas of chaos that are typically found in the blackened death sub-genre, and they continue to do so here. The music has a massive, distorted low end, filled with dissonant down-tuned riffs, deep grinding/groaning bass lines, and a percussive mix that’s heavy on the toms and the kick drum, and the band have a penchant for dropping into a staggering pace with repeating musical motifs that exude a thick atmosphere of imminent catastrophe. 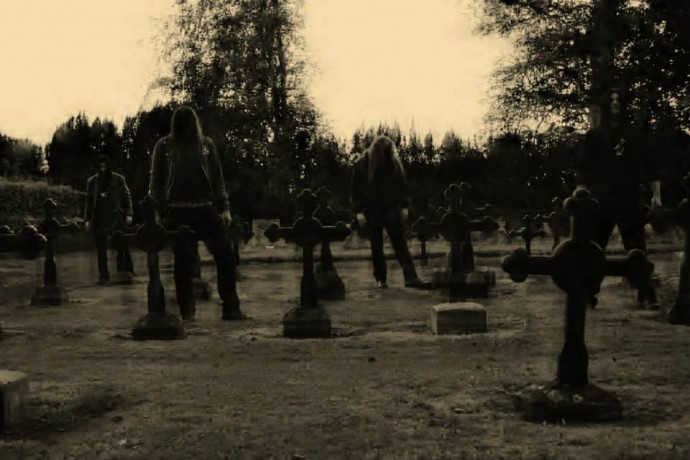 But there are two aspects of the music on Below the Hengiform that really set Malthusian apart. They are the most significant signs of the forward progress that this EP represents in the band’s creative evolution, and together they make the music unusually memorable.

The first is the infiltration of the songs with insidious lead guitar melodies that prove to be quite attention-grabbing. They’re subtle when they appear, and they don’t detract from the music’s catastrophic atmosphere — they are just as alien and poisonous as the miasma that surrounds them. But those reverberating, slithering, trilling emanations have a way of entwining with your own synapses — they have staying power, like some drug-resistant neurological plague.

The second aspect of the music that’s a hallmark of the EP can be summed up in one word: groove. Or to be more precise, skull-cleaving grooves. In a style of music known more for being chaotic and ravaging than structured, every one of these long songs is punctuated by booming rhythms that grab you by the back of your neck. Often, this happens when the tom drum and the bass guitar hit together in sync, preceded by a nano-second pause. At other times, it’s as if all the instruments have turned their attention to shaping a formless void into something tangible and monstrous. They bring structure to chaos, just long enough to get your head nodding in obedience to their powers before all the rending and tearing resumes.

The delivery of groove is just one of many bonus points that must be awarded to this rhythm section. The drumwork in particular on the EP is one of its true high points. It’s never less than interesting and it provides variety even in the passages when chaos otherwise reigns supreme.

I suppose it goes without saying that this kind of disturbing black/death/doom warfare is not for everyone. But for those who tend to relish exploring the more abyssal crevices of metal’s catacombs, Below the Hengiform is a must-listen release.

The new EP consists of three long songs, collectively totaling almost 25 minutes of music: “The Gasless Billows”, “Slouching Equinox”, and “Forms Become Vapor”.  It will be released on CD and digitally by Invictus Productions within the next week or 10 days, and can be pre-ordered at the locations below (tape and vinyl editions will follow). The stunning cover art is by Timo Ketola:

4 Responses to “MALTHUSIAN: “BELOW THE HENGIFORM””