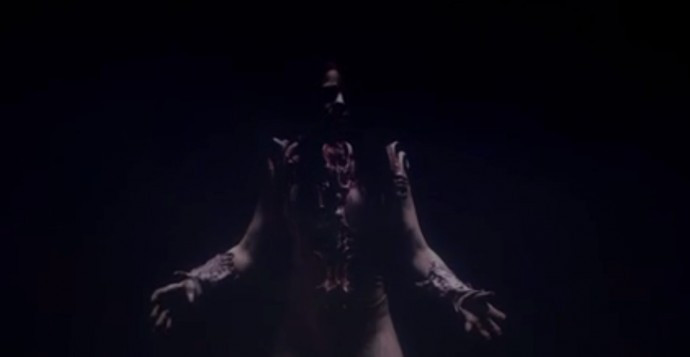 Wheeeeee!  I’m in an airplane at about 40,000 feet, traversing the continent from Seattle to Washington, DC, where I will sit in a windowless room for the next two days doing top secret work related to my fucking day job. I know I’ve just peaked your curiosity, but to be brutally honest (which is the only kind of honest we know how to be at NCS), a more fulsome description would bore you to tears.

Where was I? Oh yeah, I’m on an airplane. I have wi-fi, but it’s not good enough to stream anything, so I haven’t even watched the new videos collected in this post. Fortunately, my comrade DGR has, and he pounded out a few words for each one (except the last one) when he sent me the links. Take it away DGR…

Probably not safe for work, the middle section contains no nudity but that outfit is very form-fitting for that lady. You also get Nergal in full Lucifer garb. The costumes were designed by Sharon Toxic. It’s dedicated to the life and memory of H.R. Giger.

I swear, I have a review for this disc half-written. “Stare Into Infinity” is one of the slower songs on the disc; the band keep things pretty up-tempo on this one — save for the instrumental song halfway through. It’s a pretty steak-and-potatoes melodeath disc. Ronnie Nyman (the group’s new vocalist) also veers hard into Marco Aro scream territory. Can’t tell you how many times I thought it was him during this one.

Do not watch this video while eating, seriously. Goddamnit.

PALLBEARER: “WATCHERS ON THE DARK”

Okay, DGR didn’t send me the link for this one, and so these aren’t his words, they’re mine. As explained in the first paragraph above, I haven’t seen this video, but it’s Pallbearer’s first one ever, and the press release I received says it’s “epic and cinematic”, and press releases never exaggerate, so I’m including it here.