We don’t publish negative reviews at this site. It’s a rule: If we hear something we don’t like, we just ignore it. The mission is to spread the word about metal that makes us enthusiastic. But since I’m the dictator who laid down the rule more than five years ago, I can break it, and so I will. Here’s our first negative review.

Unleashed’s new album Dawn of the Nine isn’t very friendly. It’s actually very belligerent, even bellicose. There’s a lot of ranting and raving about blood and the spirit of Viking ancestors and the elite forces of the “Midgard Warriors” hunting down something called the “White Christ” — and it sounds like Unleashed really mean it. This is icy-cold blood lust and ferocious rage given sonic form.

Who would listen to music that frightens small children? Where’s the compassion and the tolerance? 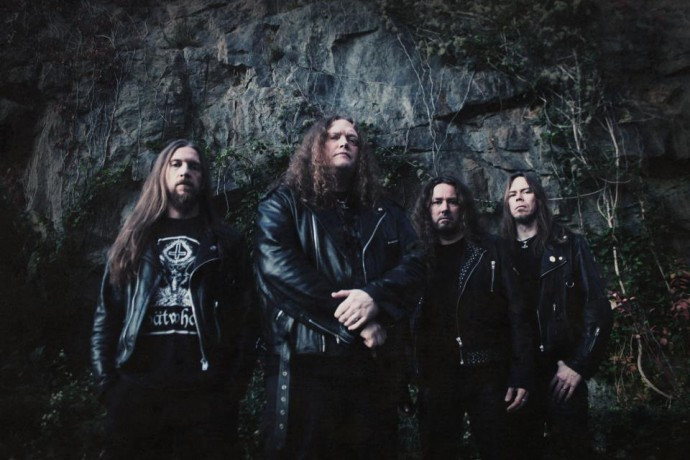 There’s a lot of vigorous “singing” about “Hammer Battalions” on the loose, the burning of churches, and restoring the hammer of Thor. If you’ve never understood the mystic appeal of Nordic paganism, give this album a pass. If you harbor secret fears that there really is a place called Valhalla and that sometimes non-warriors like yourself wind up there so the Valkyries will have someone to beat like a drum when they’re in a shitty mood (like those bullies who humiliated you in gym class), this ain’t for you.

If the notion of all-seeing ravens makes you nervous (especially because you worry that ravens are smarter than you are), and if you think the word “runes” is a typo, there are definitely better ways to spend your time.

And Thor… holy White Christ, is there a lot about Thor on this album! But let me be clear: If you get moist (or tumescent) at the sight of a shirtless Chris Hemsworth but want to crawl under the bed when thunder and lightning roll into your neighborhood, Unleashed’s idea of Thor is definitely not your cup of tea. There’s a galloping/lumbering song on this album named “The Bolt Thrower” and, well, let’s just say this Thunder God is not your friend.

And speaking of singing, there really isn’t any. What there is, instead of singing, is a noise that sounds like a panther howling with a throat full of gravel. Yes, you can hear all the words, but people whose ears bleed at the sound of a harsh cough will want to give Dawn of the Nine a wide berth. To be safe, I’d recommend putting a mountain range between you and it. Even when Johnny Hedlund is basically just talking, he sounds like a whole menagerie of predators.

Blood isn’t the only bodily fluid you’ll lose if you listen to this. There are brain-piercing, fret-burning guitar solos in almost all of these songs that will make your eyes water. I don’t know about you, but I need to conserve my tears this time of year; I have to file my income tax return in a few days. So it doesn’t matter that this album holds the best collection of guitar solos you’re likely to hear this year — don’t these dudes know that you’re supposed to wait ’til Samhain to pass out that much candy? Are they unaware that obesity has reached epidemic proportions in my country?

It also doesn’t help that in the speedier tracks (which is most of them) the riffs jab faster than hummingbird wings, or that the melodic guitar leads swarm like clouds of mosquitos. These people obviously don’t know that many listeners suffer from hypertension and frayed nerves, or more likely they’re so cruel that they just don’t give a shit. Shame on them!

Yeah, sure, Unleashed slow the pace for some dark, atmospheric moments here and there, but they just fill those spaces with more guitar solos and grim, melancholy melodies, so that’s no help. There are also some slow, bleak, acoustic guitar intro’s and outro’s attached to some of the songs — but those are just head-fakes.  Like you would actually forget that the ripping and tearing and galloping is just around the corner. How could you forget?

Okay, I’ll grant you that the album’s title track is slow almost all the way through. It’s a dismal death/doom monster that’s one of the best things on this album and a reminder that Unleashed can do more than thrash and burn. What a bunch of show-offs.

Speaking of head-fakes, Metal-Archives classifies Unleashed as a “Death Metal” band. Dawn of the Nine is blood-pumping melodic death metal, and when I say “blood-pumping” I’m talking about that hot stuff that spews from the severed jugulars opened wide by these riffs. Icky.

After 25 years and 12 studio albums, it’s really annoying that these Swedes are still so consistently pumping out well-formed, dependably barbaric songs. Isn’t it about time they started coasting and phoning it in, like normal lazy people? The least they could do is jump on a few trends. Where’s the dub-step? Are they too good for a few bars of tech-death or prog? And you’d think they could afford a keyboard player by now. How can you make epic metal without a keyboard player?

I’d suggest some “blackening”, because everything is “blackened” these days — except Unleashed have been that since way before the word was invented, so forget that idea.

And man, I wish they’d stop asking “Where Is Your God Now?” I have enough trouble remembering where I put my car keys.

Dawn Of The Nine will be released in North America on May 5th. If you have more money than sense you can pre-order a copy from the Nuclear Blast Webshop.

12 Responses to “UNLEASHED: “DAWN OF THE NINE””