Bassist James Harvey had a bit of a rough night, truth be told, early songs rendering his bass-lines as little more than a barely audible rumble, while snapping a string part way through the set forced the band to play a few songs without him entirely. Still, they persevered like the stalwart soldiers of Satan that they are, and on his eventual return Harvey’s lurching low-end was much more prominent.

Vocalist Ben Falgoust, however, was having a brilliant time, demonstrating why he’s probably one of the best and most charismatic frontmen in metal today. Whether bellowing blasphemy on tracks like “F.B.S.” and “Apocalyptic Havoc” (as well as a crushing rendition of my personal favourite “Cold Earth Consumed in Dying Flesh”) or teasing the crowd about his inability to sing like Rob Halford, his absence of pretension and lack of any sort of schtick allowed his true nature to shine through brightly. Or blackly. One of the two.

A hard act to follow, and a great way to start the day for me. 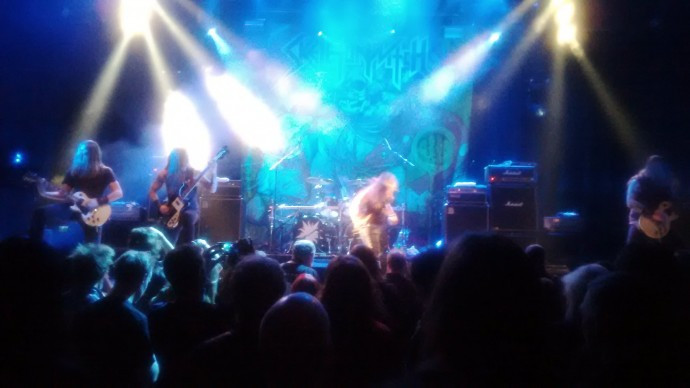 After dusting myself off from Goatwhore’s riff-tastic set, I took a short wander around the merch area (very disappointing this year, actually), before returning to the main hall to watch Skeletonwitch.

It’s always a good time with the ‘witch, and tonight was no different. Well, maybe a little different, as recent developments meant they were touring with a new singer, the moustachioed Andy Horn, who –- whether or not he ends up becoming the band’s permanent vocalist -– was definitely a good choice, strutting about like a diminutive dynamo of irrepressible energy.

Still, some things never change, and the band’s Old-School meets New-School brand of Blackened Trad-Thrash got heads banging and fists pumping throughout the venue.

Still didn’t play “The Infernal Resurrection” though. So they lose marks for that. 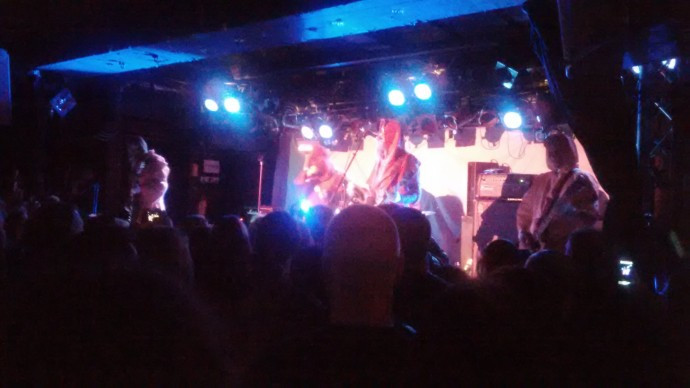 Downstairs in John Dee the red-robed occultists of Dødsengel were up next and, whilst not the weirdest band of the festival (that was, and will always be, Dødheimsgard), they were definitely one of the strangest and most distinctive musical offerings of the weekend.

Expressive and progressive, evocative and provocative, they offered a truly distinctive and individual take on the ever-changing formula of Black metal, their prowling, seductive melodies and writhing tremolo riffs bolstered by sudden explosions of blasting ferocity, and rolling, doomy riffs reminiscent of Black Sabbath at their darkest, all accented and accentuated with warped touches of 60s/70s Satanic psychedelia and slithering, auto-erotic vocals that switched between a harsh blackened rasp and a gloriously melodic, melodramatic croon.

A truly stunning performance. Captivating, catchy, and challenging, in the best possible way. 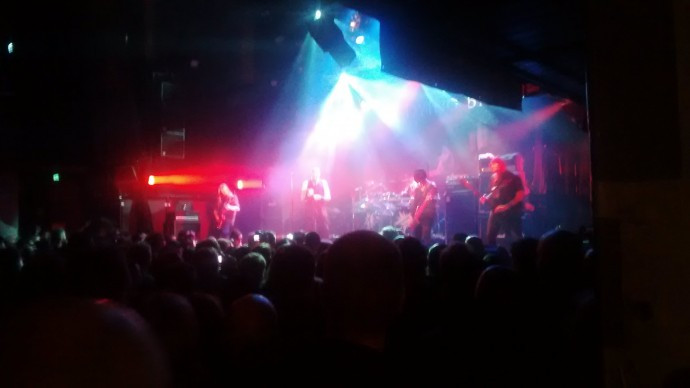 Nipping back upstairs I fought my way into an utterly packed main hall to catch a glimpse of the legendary My Dying Bride in full gloomy flight.

Much as I enjoy the band on record (and I do), previous occasions seeing them live had left me cold and, dare I say it, more than a little bored. However, this time was different. Whether it was the added pressure and prestige of playing the festival, the return of original guitarist Calvin Robertshaw, or a combination of other factors, the whole performance crackled with suppressed energy, rage, and sorrow, and it’s no surprise that the main hall of Rockefeller was absolutely rammed for their performance. 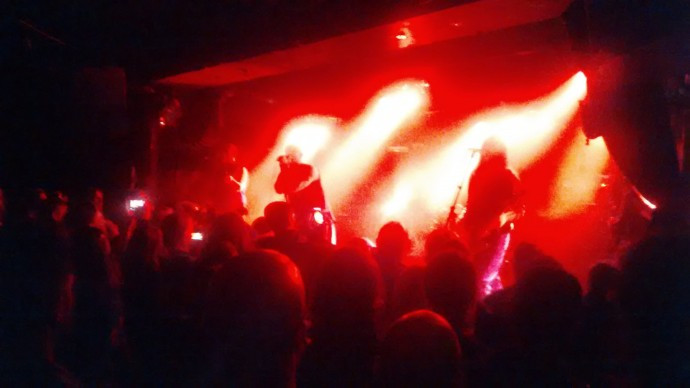 The smaller John Dee venue was subsequently host to another legendary act, one I’d be seeing for the very first time in fact, the heinous disciples of Sargeist!

Kicking off with the appropriately named “Black Fucking Murder”, the band’s pitch-black, blast-happy murder-punk -– all buzz-saw riffs, choking screams, and rampant gang-shouts -– stormed out of the gates without an ounce of mercy or restraint, pulverising eardrums in a wave of searing venom and noise.

Remorselessly aggressive and utterly ravenous, once they’d started, the band simply refused to relent, and it actually pained me a little to have to leave their set early. However, having seen how packed it got for My Dying Bride earlier, I really wanted to get a good spot to watch the next band… 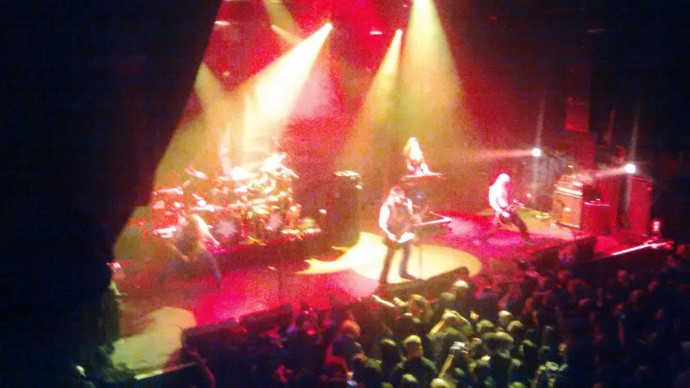 …because I love Enslaved. I really do. I’ve seen them a bunch of times now, and they never fail to impress, so I make it my business to see them any chance I get. And it was definitely worth it.

With a much less elaborate stage set-up than the previous night’s headliners, the band gave off a much warmer, more intimate vibe with their performance -– if it’s appropriate to call their otherworldly melding of might and melody “intimate”, anyway!

Where Behemoth, despite their undeniable aura and charisma, are ever so slightly aloof -– a priesthood preaching to their congregation –- Enslaved remain, no matter how epic and progressive their leanings these days, a band of the people, not least when Grutle Kjellson introduces guitarist Ice Dale as “the closest thing you get in Norway to Ace Frehley… not in musical ability, but drinking habits!”

In honour of the festival’s 15th Anniversary the band played an epic hour and a half long set, though even that wasn’t really long enough to fit in the sheer number of amazing songs that Enslaved have under their belt. Still, both “Thurisaz Dreaming” and “Building With Fire” off their latest opus got a welcome airing, along with such classics as “Ruun” and “Convoys to Nothingness”, while a suitably blast-worthy and feral rendition of “Fenris” certainly put drummer Cato Bekkevold’s stamina and fortitude to the test! 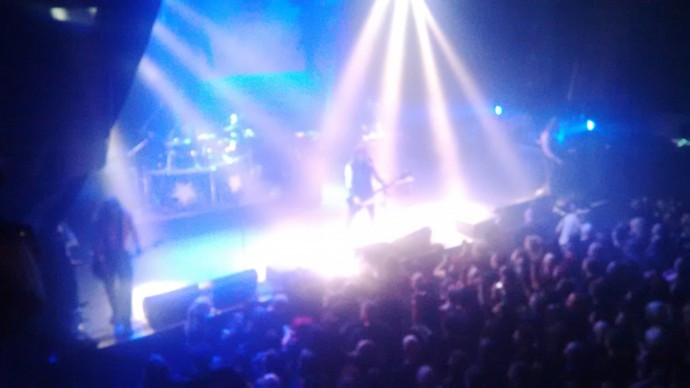 Concluding with a triumphant rendition of “Isa”, the band, who performed at the festival’s very first edition fifteen years ago, seemed to me to embody the essence and spirit of Inferno, and left behind an audience longing for more!