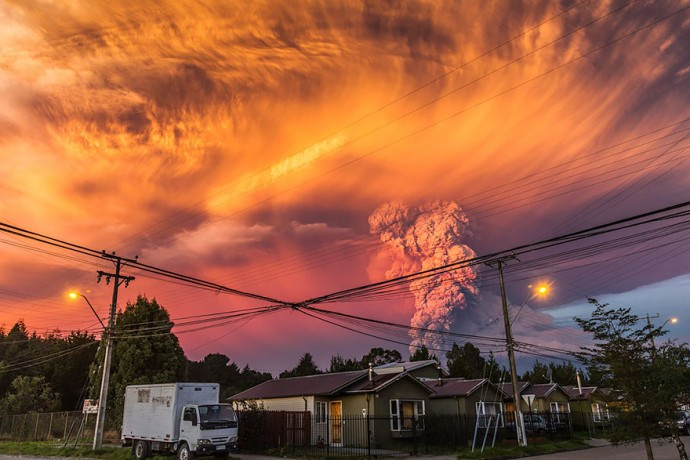 Two months since the last post in this series. Pathetic, I’m pathetic, I admit it.

Now that my mea culpa is out of the way, let’s get on with it. I have for you on this fine Sunday ten items that I thought were metal, even though they’re not metal music.

The most metal event of the last week was the eruption of the Calbuco volcano in southern Chile. I already made a post about this yesterday (here) with a bunch of photos and videos, accompanied by a random assortment of songs by excellent Chilean metal bands, but I had to include something about it in this post, too. So what I’ve included is a video of the exact moment when the eruption began.

It was filmed by a man hiking in the Llanquigue National Reserve. He’s filming a gentle waterfall in the distance, and then after 28 seconds he gets a surprise he’ll probably never forget. I wonder if he peed himself. I would have. 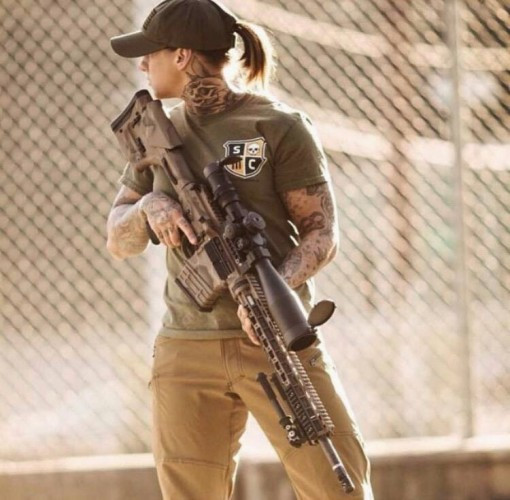 This is a photo of Kinessa Johnson, originally from Yelm, Washington. She is badass on many levels. She’s nicely tatted up, she’s carrying an SI Defense 300WM PETRA Rifle like she knows how to use it, and she probably does since she’s a U.S. Army combat veteran (Afghanistan). She could also probably bench-press you without breaking a sweat (check this out).

But perhaps the most badass thing about Kinessa Johnson is that she works for VETPAW — Veterans Employed To Protect African Wildlife.

“VETPAW provides meaningful employment to post-9/11 veterans, utilizing their expertise to train and support Africa’s anti-poaching rangers to prevent the extermination of keystone African wildlife, and the disastrous economic and environmental impact it would have.”

After all the disgusting photos that make the rounds on the web showing professional poachers as well as “big game hunters” posing with their “trophies”, it’s cool to see a photo of someone who hunts the poachers — and a trained organization devoted to that effort which provides jobs to vets at the same time. 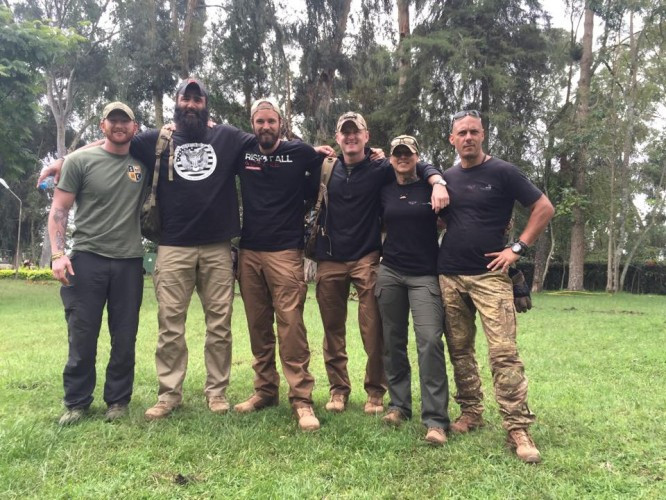 For more info about VETPAW, use this link. Kinessa has a Facebook page here and an Instagram page here. 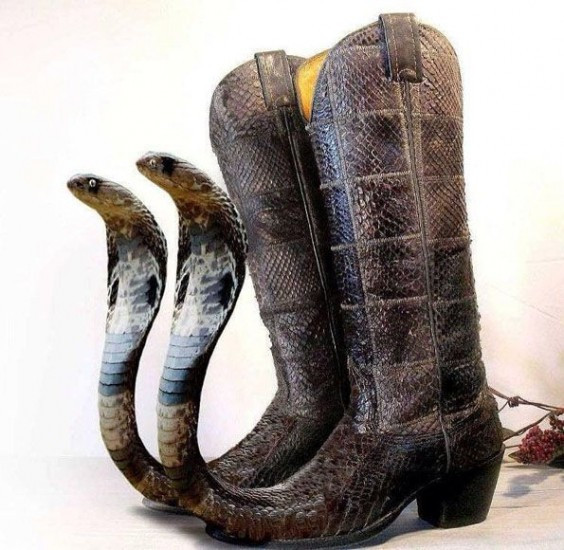 Actually, I can think of one way that Kinessa Johnson could be more badass — if she was wearing a pair of these Cobra boots.

Actually, I guess they wouldn’t be very practical in the bush, though I bet they’d scare the shit out of some poachers. Also, since Kinessa is dedicated to protecting wildlife, she probably wouldn’t spring for a pair of these. But they do look damned cool. I know, I’m being inconsistent in my ethics.

Of course, there are other ways strong women can be badass besides hunting poachers in the African bush with mega-weapons. Even raking hay can be badass.

I don’t know the name of this young woman or where this work was filmed, but it’s really fucking impressive. There’s a lot of skill involved in what she’s doing (the dude on top of the vehicle where the hay is accumulated for transport has got some skills, too), plus an amazing amount of stamina. I got exhausted just watching this.

Like the proprietor of the TYWKIWDBI blog where I found the video, I really enjoy watching people who are REALLY good at their work. It almost doesn’t matter what the work is. Being really good at what you do is… well… it’s metal. 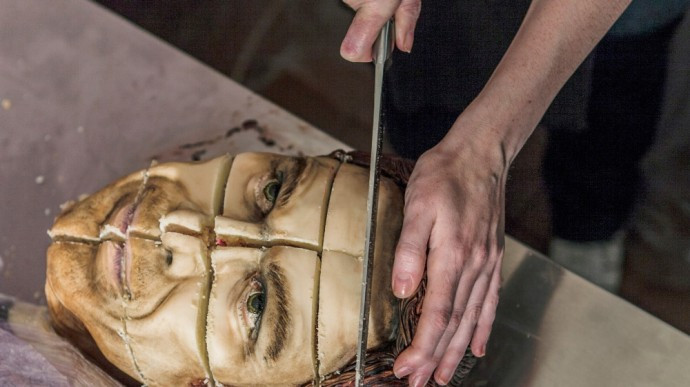 Speaking of being really good at what you do, allow me to introduce you to Annabel de Vetten (aka Annabel Lecter). She’s a German-born sculptor, painter, and taxidermist who has used her talents in an unorthodox cake-designing business based in Birmingham, UK, called the Conjurer’s Kitchen (part of her life-sized Dexter cadaver cake is pictured above). 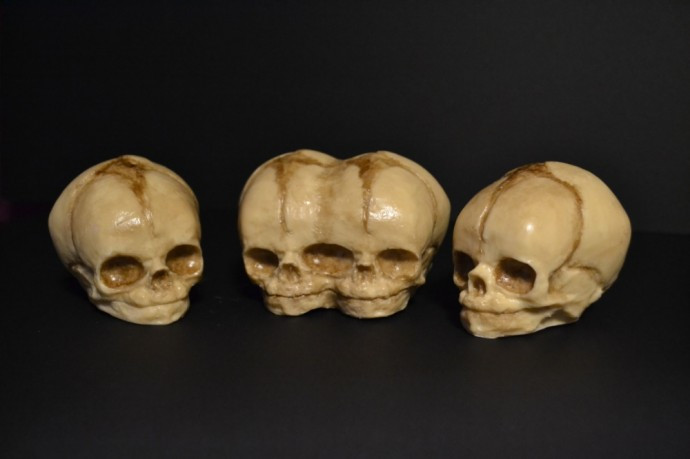 Here’s another one of her yummy cake creations: 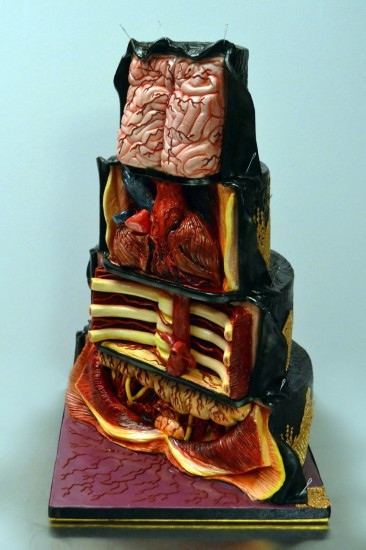 A lot more info about Ms. de Vetten and more photos of her delicious concoctions can be found in this feature written by metal maven Kim Kelly for Vice.

Also, her chocolate creations can be ordered online here — and there’s a Conjurers Kitchen Facebook page at this location. 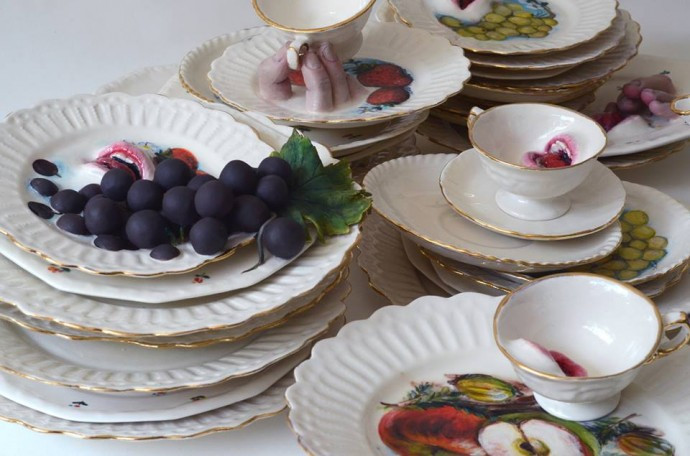 I found just the right kind of tableware to use in dining on Annabel Lector’s cakes and chocolates.

The image above and below shows the creations of Israeli sculptor Ronit Baranga, which integrate depictions of body parts such as mouths and fingers into tableware. 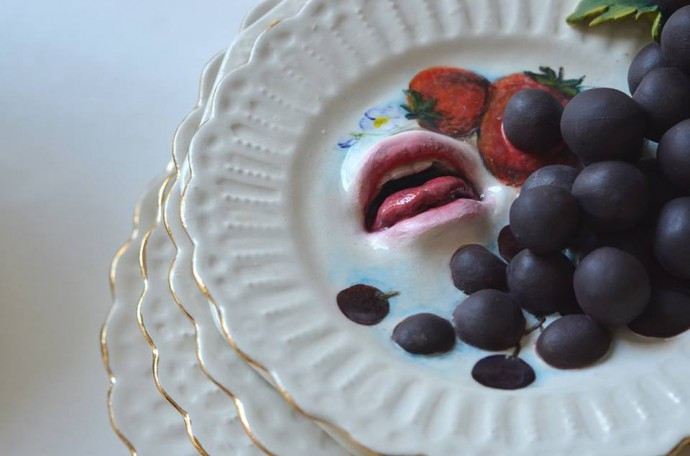 Creating tableware isn’t all Mr. Baranga does. You can see a lot more of his fascinating creations at his web site (here). I’ll leave you with one more (and thanks again to Utmu for the tip on Mr. Baranga’s work): 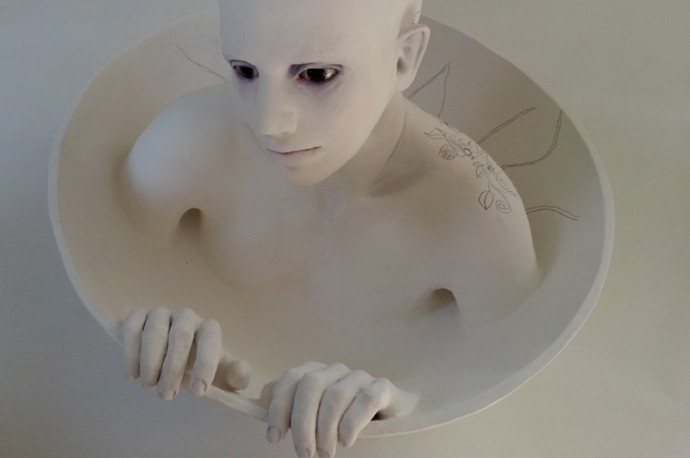 Okay, it’s time for something disgusting from the world of nature. I’m not sure why I think disgusting creatures are metal; probably for the same reason I like Cannibal Corpse song titles. Anyway, what you’re about to see is a video of a giant red leech sucking down a 70cm-long blue worm.

I’m pretty sure Utmu sent me this link, too. He derives some kind of sadistic pleasure in sending me photos and videos of creatures that make my skin crawl. I’m just paying it forward. 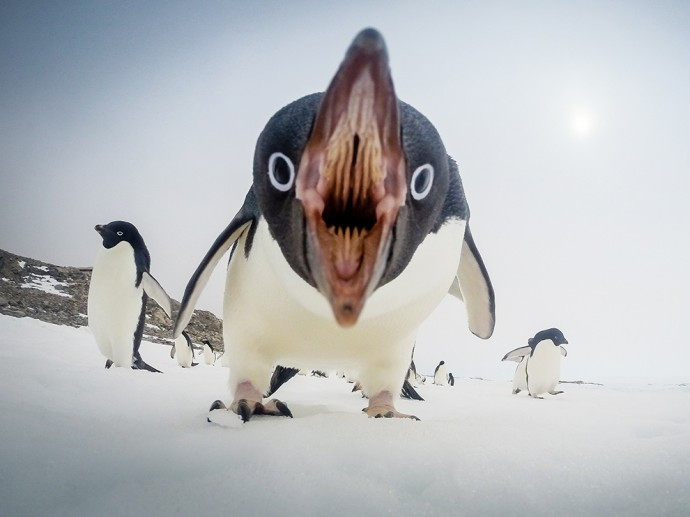 Okay, now it’s time for some GoPro fun, beginning with this completely metal (and completely mental) image of an Adélie penguin captured with a GoPro on antarctic sea ice by Clinton Berry. It was National Geographic’s Photo of the Day on April 9, and I have Dane Prokofiev to thank for sending it my way.

I had never seen the inside of a penguin’s mouth. I think once is enough.

Continuing with the GoPro fun, I’ve got two surfing videos that are as beautiful as they are exhilarating. Both videos were submitted by surfers in GoPro-sponsored competitions.

The first one (which I found via TYWKIWDBI) is of a 27-second tube ride at Skeleton Bay, Namibia, last June that won the $20,000 grand prize in the inaugural GoPro of the World competition. The surfer/videographer is Koa Smith of Kauai, Hawaii.

“I’m just so psyched, it was the barrel of my life and I had a GoPro in my mouth,” said an elated Koa Smith after being presented with an oversize check from GoPro by his brother Alex. “I just couldn’t even believe it. If I didn’t have a GoPro, I would try to explain [that wave] to people and they would just be like, ‘Yeah right, whatever.’ I’m just so stoked that I got that wave, that guy didn’t burn me, and I filmed it.”

The second video was also a competition winner. It won first prize in the GoPro of the Winter 2013-14 competition. It was filmed by Jamie O’Brien off the North Shore of Oahu, Hawaii. The music is “Plush” by A Million Billion Dying Suns (on Soundcloud here).

For the final item in this collection I have a video that will require a bit more of your attention span than the videos I usually include, but I think it will be worth your time.

The Lost Thing began as an illustrated book by the immensely talented Australian artist, writer, and filmmaker Shaun Tan. He eventually adapted it into a short animated film by the same name, which won the 2010 Academy Award for Best Animated Short Film. It’s about 16 minutes long. I watched it for the first time yesterday — and then watched it again.

Visually, it’s completely wild. The imagination and creativity that went into rendering the story (not to mention the story itself) left my mouth hanging open in wonder. Apart from the fact that it’s unorthodox in almost every way, I thought the film was metal because the narrative tells the story of a creature so seemingly lost and out of place that it doesn’t seem to belong anywhere… though in the end, perhaps it does. And sometimes I think that way about some of us who create and are devoted fans of extreme metal.

There are probably deeper layers of meaning in this story… such as one suggested by the narrator’s final lines. I’d be curious in your own interpretations if you care to leave a Comment.

And that’s it for this installment of THAT’S METAL! As always, enjoy the rest of your fucking day.