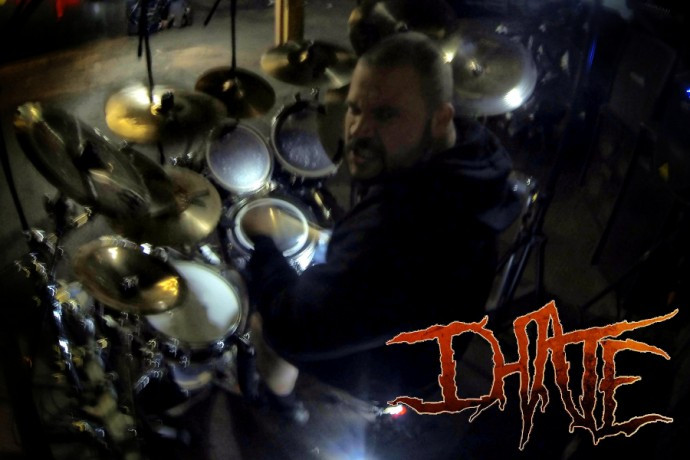 (Our Kansas-based friend Derek Neibarger — the man behind the Godless Angel death metal project and the inventor of the Cat Hand Rest©, returns to NCS with this interview of the man behind IHATE.)

When I think of places around the world which have been the birthplace of great death metal, I typically think of well-known metal spawning grounds such as Florida, Brazil, New York, and Sweden. The last city that comes to mind is Waterbury, Connecticut. Thanks to IHATE, I’ve been shown the error of my ways.

IHATE is the twisted brainchild of multi-instrumentalist Bob Taggett. His musical prowess is easily on par with the death metal greats, delivering crushing slabs of riffage over steamroller percussion. My introduction to IHATE came in the form of the super-creepy music video for “Stretcher”, a first-person view of a psychopath stalking his victim. The track comes from IHATE’s full length demo, which features the familiar gurgling roar of none other than Chris Barnes, from Six Feet Under.

I was incredibly fortunate to be granted an interview with Mr. Taggett, who was more than happy to talk to me about the origin of IHATE and what we can expect next from this remarkably talented musician. 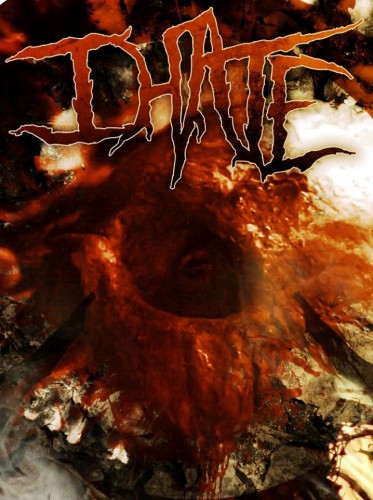 Derek: Hi Bob! Thank you so much for granting me an interview! Let’s start from the beginning; when, where and how was IHATE created? How did the collaboration with Chris Barnes come about?

Bob: Hi Derek! Thank you for this interview! IHATE is a band name that I have been wanting to move forward with for years.  One day I was determined to stop saying “someday” and just downloaded a recording program and learned how to use it all. I went crazy on it until all the songs were recorded in raw form.  All of the songs on the first album are musically written in order. The song “A Self Sufficient Execute” was originally written to be right after “Seeing Red”. But since I did the vocals on that one I left it off of this record. My original plan was to have a few cameos.  But once I sent the video for “Stretcher” over to Chris Barnes and he agreed to do vocals on that song, one thing led to another and he eventually did the whole record.

Derek: On your Facebook page you stated that Barnes will not be a part of IHATE going forward, and you will be taking over as vocalist. The demo you did with Barnes is available on CD and is packaged with another CD containing instrumental versions of all the tracks. Will you be re-releasing album with your vocals?

Bob: Both versions of the album are all on one disc. It starts with the full demo album with Chris Barnes on vocals followed by the instrumental version which was intended for the final product.

I don’t think I’ll re-release the whole album with my vocals. I might only do like 1 or 2 songs and release them just as a straight-up demonstration to show how I can rip those songs a new one.

I thought about it for a while. What’s the best thing to do? Should I redo the vocals Vile/Created To Kill style? Or should I just say fuck it, and put it all out the way it is? Here is the demo and here is the attempt.

Being an old Cannibal Corpse fan myself, I realize that people are going to want hear him more at first. So I didn’t want to confuse anyone with too many different versions. I think that even as a demo the album is an absolute masterpiece the way the songs rip right into each other — it is actually an “album” instead of just a bunch of songs.

So, either way I’m very proud of it. I just couldn’t let the instrumental go to waste. Just because that campaign failed doesn’t mean that the quality of music should be shitty. Nothing I do is half-assed. That’s where the title “All or Nothing” comes from.  If you hear it, you will know why. Its super adrenaline charged music. 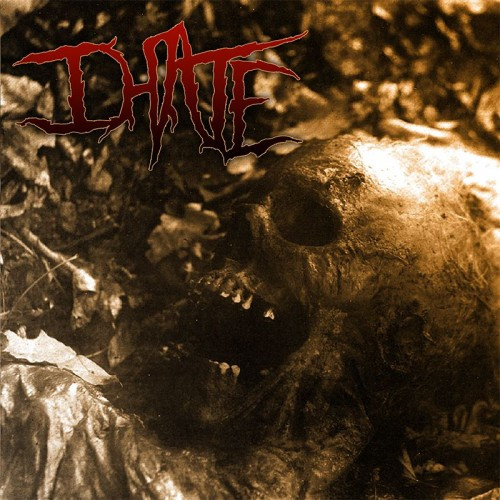 Derek: You’ve done an absolutely amazing job as the lone instrumentalist in IHATE. I know you’re putting together a live version of the band, but will you continue to record as a solo artist?

Bob: I’m going to continue to write a lot of the music for sure, But once IHATE is out on the road, I would be honored to have the band record on future albums.

In the meantime, I am already almost finished with another full album that I am shooting to release later this year.

Derek: In addition to being total badass on guitar, bass, and drums, you’ve also done fantastic work on the videos for “Stretcher” and “Seeing Red”. Both are extremely metal, very creepy and gruesome, and just as much fun as the music they were created for. Will we get see more of your twisted genius on future IHATE videos?

Bob: Yes, absolutely. My original plan was to have a video for every song on this record! Expect to see a lot of IHATE videos in the near future. I swear If I ever make a horror movie people would want to sleep with a gun. 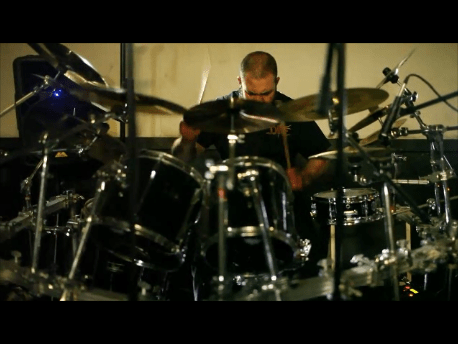 Derek: You’re also working on the debut album for another project, Kill Mode, with Brian Hoffman of Deicide. How did that collaboration come about? Do have any idea when the album will be released? Will there be a live version of this project, as well?

Bob: Brian and I have been friends for a while now. He is an awesome guitarist and I’m really lucky to be able to work with him. We don’t have an official release date for Kill Mode yet, but I can assure you that the songs are seriously fast and just down right BRUTAL. We do plan on touring with Kill Mode once we start releasing more material.

Derek: I have a one-man death metal project of my own, and although I do all the vocals and instruments I still consider myself a bass player. It’s the instrument I started out on in my very first band and I just have a bond with it. Is there an instrument you identify with more than the others?

Bob: That’s tough to say, but I guess I consider myself a bassist and a drummer first. I’ve always kinda gone back and forth between the two. I first started playing drums when I was about 9, but the first instrument I really took seriously was playing bass/vocals. As far as writing music goes, I usually write/record the drums first and then fill it in with the guitars; so it keeps everything rhythmically charged and very up-beat.

Derek: Are you working on other music projects? You’ve been able to collaborate with two awesome musicians in IHATE and Kill Mode, are there any other metal legends you would really love to work with?

Bob: I might have a guest appearance or two on the next IHATE album, but for now I’m totally focused on recording. 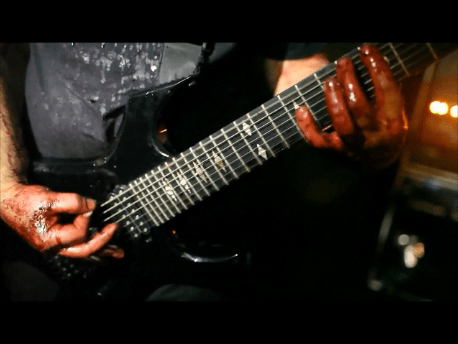 Bob: The first bass I ever owned was a plywood Applause 4 string I bought from my neighbor for like $75 bucks. I only had that thing about a month or two until I got my hands on a used Warlock bass. And 20 years later I’m still Warlock’d out! Now my main guitars are a custom non BC Rich 5-string and a U.S.A BCR 7-string.

My first metal album was I think Cowboys From Hell or Vulgar Display Of Power from PANTERA. My first concert was METALLICA. But my first real mosh pit was PANTERA! 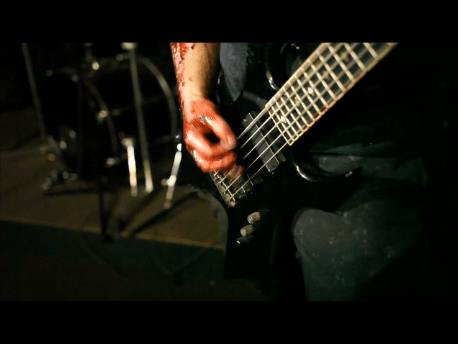 Bob: My favorite breakfast cereal is probly Frosted Mini Wheats! I really don’t have much of a shirt collection anymore because they all get so mangled, but my favorite shirts were “Butchered at Birth” from Cannibal Corpse, “One Upon The Cross” from Deicide with the dissected Jesus on it, and “Chainsaw Dismemberment” from Mortician.  All those shirts did not help get me laid. Ha!

As for Cat n Dogs, I have one of each and I love them both!

Derek: Thank you so much for taking the time to answer my questions! I can’t wait to hear new music from IHATE and Kill Mode, and hopefully I’ll be throwing you the horns from the pit very soon!

Bob: Thank you for the interview Derek! I can’t wait for everyone to hear how crazy the next IHATE album is going to be.

Check out the videos for “Stretcher” and “Seeing Red”! (And to hear more songs from the demo, visit IHATE’s Soundcloud page (here) or Spotfiy (here).)