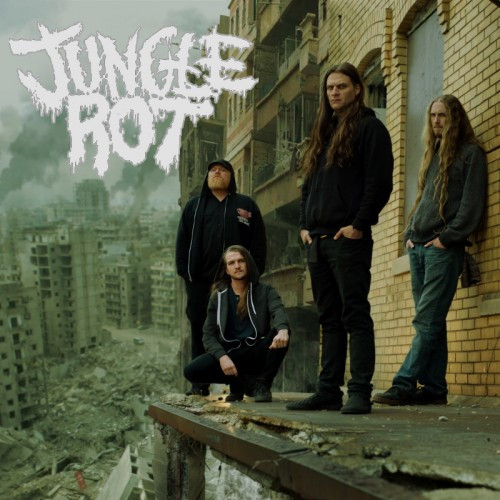 (Our Kansas-based friend Derek Neibarger — the man behind the Godless Angel death metal project and the inventor of the Cat Hand Rest©, brings us his interview of Dave Matrise, vocalist of Jungle Rot.)

I have to extend a very heartfelt thank you to Kenosha, Wisconsin. The fourth largest city in the state has given us Mark Ruffalo, the best Bruce Banner aka The Hulk. And more importantly it is the home of the death metal monstrosity, Jungle Rot.

Formed in 1994, Jungle Rot has delivered seven crushing full-length albums. With their eighth album on the way and a coveted slot on this year’s Rockstar Mayhem Festival, it was the perfect time to catch up with vocalist, Dave Matrise, to talk about what looks to be a very exciting year for these death metal legends!

Derek: Hi Dave! Thank you for taking time to do this interview for me! Jungle Rot entered the studio last month to begin working on your eighth album. How are the recording sessions going, so far? Do you have any idea when the album will be released, or when we’ll get to hear some new music?

Dave: Hi, yes we went into Bell City Recordings on April 17th. I could not be happier with how everything is coming out. Again, we went into the studio ready for war. We all had a job to do and everyone did it well. Knowing just what we had and what needed to be done to make this another J-Rot release. The album will be available on June 30th and I’m sure a video will be released at the same time to let everyone get a taste of it.

Derek: Does Jungle Rot have a primary songwriter(s), or is it more a band effort?

Dave: Geoff, James, and I are the writing process.  When we get ready to write a new album I will lock myself away for some time and get most of the songs written. Then Geoff (guitar) gets into the picture. Geoff and I will sit down on the computer and he will write the drum beats to the songs and we then arrange them into the perfect song. When we know what we have, we then get started on the rough voxs. That’s what really brings it to the next level.  This is where we start to see the songs starting patterns and taking meanings. Then it’s time for us to bring in James (bass) to finish off with all song titles and lyrics. 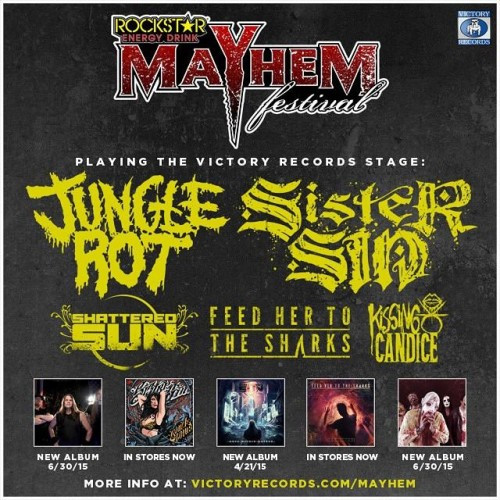 Derek: Jungle Rot will be playing the Victory Records Stage on this year’s Rockstar Mayhem Fest, which will be headlined by Slayer and King Diamond. That’s a pretty awesome way to spend your summer! Are there any bands on this year’s roster that you’re looking forward to seeing?

Dave: Hell yes! This is going to be a good summer for J-Rot. I’m going to be checking out Code Orange for sure and of course growing up on Slayer and the King I will try to catch them as often as I can.

Derek: Will Jungle Rot be doing any club gigs during the Mayhem trek? The festival is skipping Kansas City this year, but I could overlook that transgression if Jungle Rot were to squeeze in a headlining show in KC.

Dave: Yes we are booking one-off shows as we speak. I do hope we play KC again because we don’t get there much and when we do it’s always one to remember.  I’m pretty sure there will be an off-date added to it.

Derek: You have new drummer, Joey Muha, formerly of Threat Signal. How did that come about? With the exception of the drummer slot, the Jungle Rot lineup has remained the same since 2005, and it really shows in your incendiary live performances!

Dave: We’ve been working with Joey for a few years now. He sold merch for us on our last tour and really showed me he wants to be out there doing this. He has a ton of positive energy and I like that about him. We really don’t mind playing with different drummers as long as they can play our stuff the way we like it. Yes, Geoff, James, and I are the core of the band and I think everyone knows this by now. I am really looking forward to touring with Joey on this new release and we will see where it goes from there with him.  He really did an amazing job with his drum tracks in the studio and soon it will show. 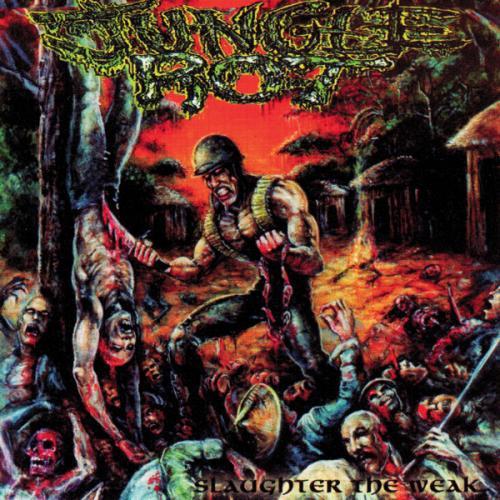 Derek: Your debut album, Slaughter the Weak, was released eighteen years ago. Looking back, what are your thoughts on that album? How do you compare the tracks on Slaughter the Weak to the songs you’re working on right now?

Dave: Hmm… looking back I don’t see that it changed much. Maybe only that the songs today are more structured and have more meaning behind them then they did back then. I wrote most of the lyrics back then and they really didn’t make much sense. Now with James writing them, they have a point. I remember telling James one day that I just can’t keep singing about war and gore. I have already killed everyone and there’s no-one left to kill (jokingly) and James took over from there.

Derek:  Jungle Rot has toured the world several times over. Is there anywhere you haven’t played yet that you hope get to, soon? Is there a venue, city, or country that you look forward to revisiting on tour each year?

Dave: Yes, I do have some places I would love to play. It’s always been a dream of mine to tour Russia and South America. Both places I have always dreamed about when I was starting out and I hope someday it happens. I love touring the US, there are so many good places we play, like Reggie’s in Chicago. Reggie’s always shows lots of love and support for us, and the crew working there is amazing and always makes it a fun time for us.

Derek: If you could tour with any band in the world, past or present, who would it be?

Dave: Well, it will come true this summer touring with Slayer! Another one I think about would be the European invasion. Big 4: Kreator, Sodom, Destruction, Jungle Rot. Maybe someday this will happen…I’ve been dreaming of this tour for over 20 years. 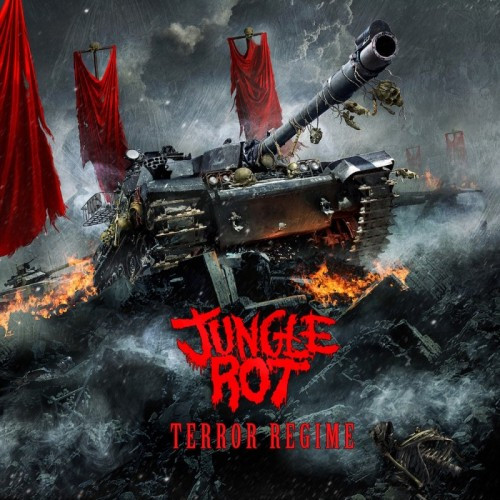 Dave: Hmm. My first guitar was a Cort Flying V my dad bought me — it was a wood-grain body and very nice looking. Ozzy and Blizzard of Oz was my first taste of metal. It was my sister’s album, but I played it more.  I still remember this like it was yesterday… my first concert was Kiss and Judas Priest in my hometown.  I think I was 12 or something like that. Years later Priest was the only thing that mattered to me.

Dave: Easy! Frosted Flakes – I eat them every morning. Yes, I do have many band shirts, one of my favorites would be my Kreator – Pleasure To Kill in snow camo. I am a definitely a dog person, I have 5 Labrador Retrievers and they are a huge part of my life. I use them for my work when I guide upland game in the winter.

Derek: Thank you so much for taking the time to answer my questions!  I can’t wait to hear some new Jungle Rot, and hopefully I’ll be watching you from the pit in the very near future!

Dave: Thanks Derek!  I know we have some very promising stuff with the newest CD coming out on June 30th on Victory Records. I can’t wait for everyone to hear it!

Check out the official music video for the title track from Terror Regime!