B. B. King, whose world-weary voice and wailing guitar lifted him from the cotton fields of Mississippi to a global stage and the apex of American blues, died Thursday in Las Vegas, The Associated Press reported. He was 89.

His death was reported to The A.P. by his attorney, Brent Bryson.

Mr. King married country blues to big-city rhythms and created a sound instantly recognizable to millions: a stinging guitar with a shimmering vibrato, notes that coiled and leapt like an animal, and a voice that groaned and bent with the weight of lust, longing and lost love.

“I wanted to connect my guitar to human emotions,” Mr. King said in his autobiography, “Blues All Around Me” (1996), written with David Ritz.

In performances, his singing and his solos flowed into each other as he wrung notes from the neck of his guitar, vibrating his hand as if it were wounded, his face a mask of suffering. Many of the songs he sang — like his biggest hit, “The Thrill Is Gone” (“I’ll still live on/But so lonely I’ll be”) — were poems of pain and perseverance.

Mr. King considered a 1968 performance at the Fillmore West, the San Francisco rock palace, to have been the moment of his commercial breakthrough…

When he saw “long-haired white people” lining up outside the Fillmore, he said, he told his road manager, “I think they booked us in the wrong place.” Then the promoter Bill Graham introduced him to the sold-out crowd: “Ladies and gentlemen, I bring you the chairman of the board, B. B. King.”

“Everybody stood up, and I cried,” Mr. King said. “That was the beginning of it.” 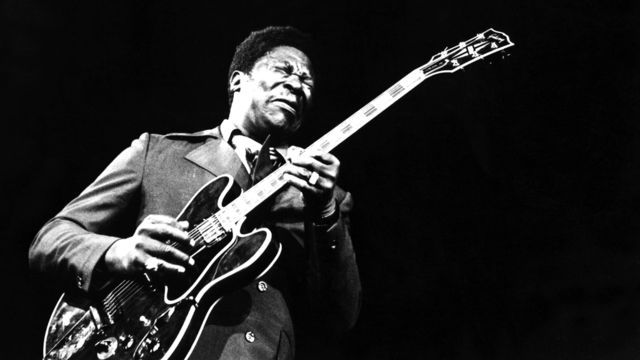 7 Responses to “THE THRILL IS GONE”