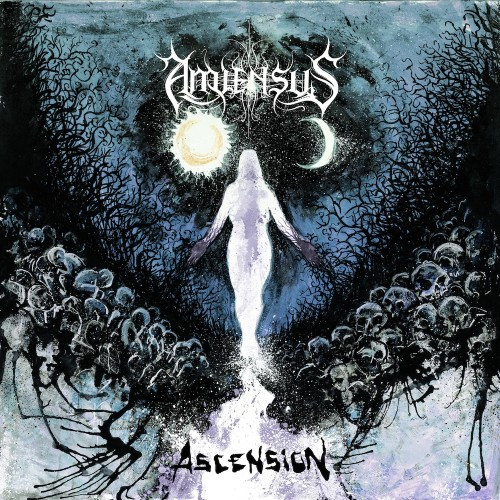 We’ve been following Minnesota’s Amiensus very closely, from their excellent 2013 debut album Restoration (reviewed here), to their split that same year with Oak Pantheon, entitled Gathering (reviewed here), to the release of their cover of Forefather’s “Wolfhead’s Tree” last fall, which we had the privilege of premiering (here). And now we’re delighted to bring you a stream of the first advance track from the band’s new album Ascension — plus we’re announcing an NCS-sponsored Amiensus tour with Wisconsin’s Warseid. First, the music…

The new Amiensus song is “What Words Create”, the third track in order on Ascension. It’s a dynamic, multifaceted song — dramatic, atmospheric, sweepingly melodic, and also charged with hard-driving energy. And it gets stuck in your head very quickly.

The music is both impassioned and dreamlike — along with propulsive drumwork and thundering riffs, it includes panoramic keyboard melodies and some beautiful guitar solos,  The multifaceted character of the song is reflected in the vocals as well, which move from jagged growls to urgent chants to soaring clean vocals. It’s an intriguing taste of an album we’re really looking forward to hearing in its entirety.

Ascension features cover art by one of our favorite metal artists, Kim Holm. The album will be released on July 1, 2015. You can pre-order a digital download of Ascension right now via Bandcamp (HERE), and pre-orders of CDs and related merch will become available beginning around June 1. 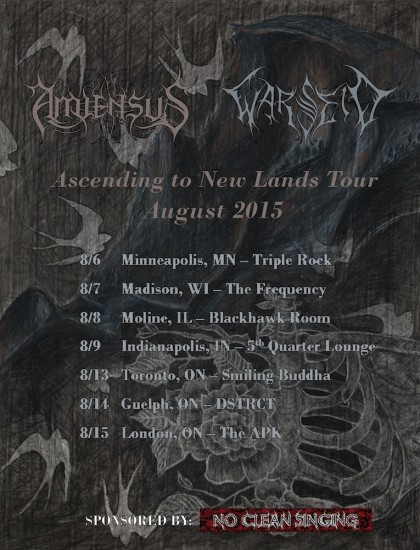 Now for the tour news. During August, Amiensus and Wisconsin’s Warseid will join forces for a tour that we’re proud to be sponsoring. The entire schedule hasn’t been completely finalized, but as you can see on the tour flier above, it will include stops in both the U.S. and Canada. We’ll keep you updated as the schedule evolves further. Both these bands are well worth catching live if you get the chance.

Warseid have some new-music news of their own. Here’s an update from the band:

We’ve been hard at work since the beginning of the year tracking and fine tuning our first full length album. We have a bit left to record and a fair amount of editing and sample programming to do, not to mention mixing and mastering, but we will be releasing the finished product sometime this year. Hopefully not too long after the tour! The album will be called A New Land to Find, and the track list is as follows:

1. Hliðskjálf
2. Dragons in the Mist
3. Between Shadows
4. In Themselves They Believed
5. When the Ravens are Fed
6. The Winds Sang of Death
7. Damnation and Its Hold

For those who haven’t yet discovered Warseid, here’s a stream of their last album, 2012’s Where Fate Lies Unbound, which you can find on Bandcamp (HERE) along with their previous releases.