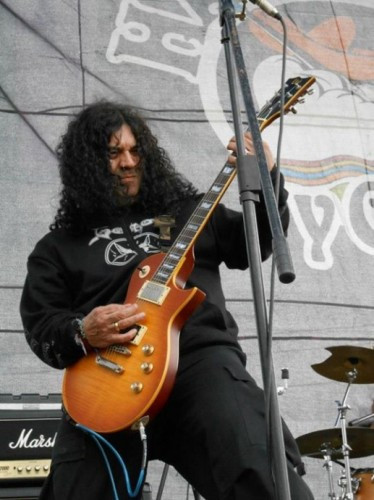 Ultratumba isn’t a new band; they’ve worked in the metal underground since 1995, but it’s rare to find one who knows about this bunch of brutal dudes from Mexico City. It’s strange, because this band under the guidance of talented guitarist Lorenzo Partida Bravo have already released six pretty diverse albums (and one live album).

Their full-length La Casa del Escarabajo (“House of Beetle”) was written in 2010, and it demonstrates very harsh and aggressive death-doom metal with some unusual approaches, while the band’s last work Sopa Envenenada (“Poisoned Soup”) is closer to more traditional doom, yet with pretty wild vocal lines.

Besides that I need to mention that Lorenzo has played in the thrash/death band Transmetal since 1987 and he also has a solo progressive project named simply Lorenzo Partida! Am I talking too much today? Maybe, let’s give a word to Lorenzo.

Hail Lorenzo! Ultratumba is an old band, it was started in 1995, but it is mostly known in Mexico and quite unknown outside the country. What is the band’s history?

Ultratumba emerged as a musical workshop where each album has enough space to let each band’s member express himself. We recorded our first album Dentro de las profundidades de la tristeza… (“Within the depths of sorrow…”) in July 1995 with a new line-up in Mexico. The album had an unusual host, and after its release we made a tour of 18 cities in Mexico to promote the album. From that moment Ultratumba have achieved instant recognition among the public that likes the slow, deep heavy music. We’ve recorded 7 albums during this time.

What were the highpoints of Ultratumba in its history?

The greatest achievement for the band is the interest of people to each album we have done. Plus we have loyal followers with real fervor supporting our rare shows. 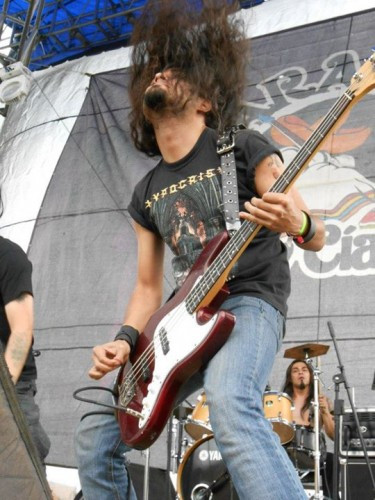 Where has the band played outside Mexico?

All Ultratumba’s songs have Spanish lyrics. What do you sing about? Metal-Archives says that the themes of your songs are “Pain, Poverty and Spiritual Sadness”.

Yes, all our albums contain lyrics sung in Spanish. We decided to sing in Spanish because our public mostly speaks only Spanish. The lyrics try to portray life in the slums with lack of jobs, and the future uncertainty that exists in these areas populated by many young people without a good chance at life. These issues fit very well to our music and in the reality that we play live.

Ultratumba’s first album was released in 1995. How was it? How did you discover death doom music?

Our first album Dentro de las profundidades de la tristeza… musically speaking… has influences from bands like Uriah Heep, Emerson Lake and Palmer, Black Sabbath. However, it has a very definite personality. The band worked over its own style from the beginning. The lyrics addressed issues like this:

Ultratumba also has an album Cultivate a la obscuridad, a tribute for Black Sabbath. How was this record accepted by listeners? Why did you decide to do such a record?

The Black Sabbath tribute album was well-received. Even with all of the hundreds of tributes that have made for them, our tribute has been a great hook to attract the public to both the true fathers of heavy metal and Ultratumba.

Our sole purpose was to touch these issues of Sabbath on a whim and with passion!!

Ultratumba’s album La casa del escarabajo” (2010) mostly contains death-doom or down-tempo death songs. And your last record Sopa envenenada (2013) has an interesting combination of death-doom and stoner stuff. Can you tell me about this record?

La casa del escarabajo is an album that tells stories of homeless people who live among the garbage and extreme poverty, the music is a very slow doom… Sopa envenenada is an album of stoner, doom, and rock, with lyrics that invite us to flee this world of misery.

I would like to ask you to tell a story of one of new songs from Sopa envenenada. Just choose your favorite one!

My favorite song on this album is just … “Sopa envenenada”. The lyrics says: “Bloodstained mantel… give me the poisoned soup dishes gold…”

What was your favorite book when you went to school?

At school I was forced to read The Divine Comedy by Dante Alighieri, which is now a real treasure for me. This kind of book completely changed my life.

Lorenzo, when did you start playing guitar? Who were your spiritual teachers?

I started playing guitar when I was 15, I listened to Jimi Hendrix, Jimmy Page, Billy Gibbons, and Richie Blackmore … they were a great inspiration and showed me the true path of music. 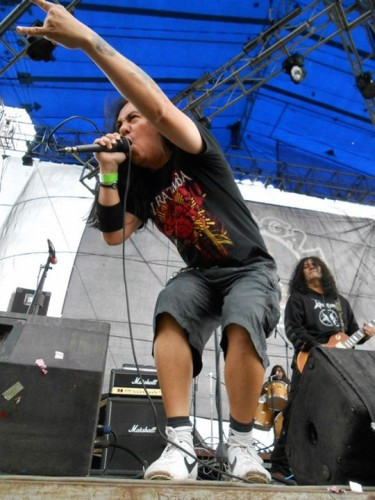 Your first band is a thrash formation, Transmetal, and it has been active since 1987. What is the secret of its long life?

Having achieved belonging to a band like Transmetal been for me a way to convert my dream into reality. With these men we have performed 4500 live gigs in 28 years and have recorded 33 albums.

In music, as in all art, there is no certainty of success whatsoever. One must surrender to what you love with all your heart and soul… that certainly… will become what many call success!

Lorenzo, you also have progressive metal solo-project. Why did you decide to create it when you were already playing in Ultratumba and Transmetal?

Yes, now I have three solo albums… I decided to do these records to supplement my work as a writer. I’m selling small packages that include a CD and a book of poems. This increased the demand of some of my recordings and my books.

Comrade, how do you find time, resources, and energy to compose, record, and release music for your solo project, Ultratumba, and Transmetal?

I consider myself very fortunate to perform and work in this great art, music and poetry. My thoughts and activities are at 100%, trying to capture all those words and sounds that float in the air and will surely take life in a song or poem… The energy right there, pushing me to every work I do, is clear.

The hardest part for me is to get the resources to edit a new CD or a new book… I have practically had to “sell my soul” to collect every penny that is used for each of my projects. The music chooses me… and I just let myself go quietly. 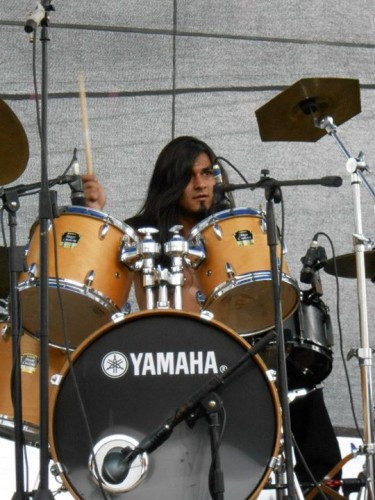 Do you think about international promotion, as all of your bands have Spanish lyrics and you play most of your gigs in Mexico?

TRANSMETAL is known by medias in many parts of the world, especially in USA, Central, and South America — our albums are very popular in these regions. We had some proposals for presentations in countries like The Netherlands and Portugal… We hope to be there soon. Yet Mexico now is our base.

Lorenzo I hope that this interview will help you to find more listeners abroad. Good luck and all the best! Do you have something further to say to our readers?

Aleksey, truly appreciate your time spent in our interview… if someone wants to listen to my musical works then you can visit:

I reiterate my gratitude and want to share a couple of poems that I hope you will like.

the fire on their faces…

heritage of smoke and ashes.

as the words swelter

Smoke and fire the role corrode.

and no one knows the exact threshold…

where they will burn death in our eyes…

Hand painting in a vacuum

colors and time are interwoven

plotting the silence and whispers

battles of love and caresses

fingers in the body sculpt…

The heat of tenderness

in the rebellious hand

fragrant creation on the table

that they hide the color of the mysteries….

The hand goes to the canvas and the skin

and tearing his clothes.

One Response to “AN NCS INTERVIEW: ULTRATUMBA (LORENZO PARTIDA BRAVO)”