I am glad this album doesn’t sound like its cover. After the first note you are assured that it won’t. If this is black metal it’s a very American take on it. They bring the blasting to an end for “Yearn” as they morph into more of a sludge band. There is even a tinge of melody beneath the rasp of the vocals, which are mid-ranged and overdriven at the mixing board by Sanford Parker. ”Yearn” is woven through some interesting twists and turns, before the point is pounded home and it’s time for heads to bang. This tends to be carried out in a meaner feel than Sky Swallower. Credit goes to the wider dynamic scope allowing the heavy sections to feel heavier, despite the album’s crisp production.

Slamming a blast of well-mixed double bass right into your fucking face, Vattnet Viskar make “Impact” live up to the song’s name. Like any lasting piece of art, more reveals itself when you return to it, like the doubled gang vocals that were hidden til the third listen. 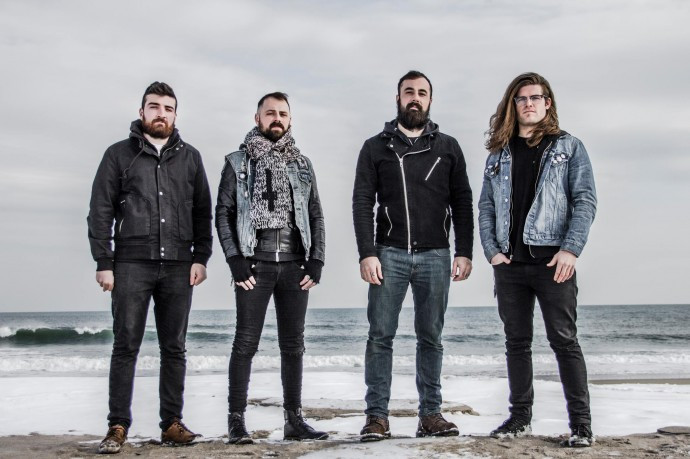 “Glory” finds its groove riding a balance of power and grace. I wouldn’t be surprised if they became one the few obligatory yet out-of-place metal bands at next year’s Bonnaroo, as the abundance of catchier riffs make this album a more accessible listen — this, combined with the moments where they break away from the American black metal sound to wander off into some prog. This hook infestation is not a bad thing; they have not turned suddenly turned into Killswitch Engage. There is plenty of menace when the bass player makes himself known by the rumble he adds to the breakdown on “Glory”.

The band is breaking away from the pack, but still show common ground with their peers, with some of the post-rock leanings USBM bands tend to have — hanging on the blast beat to create atmospheric drones. “Atmospheric” has been one of the more common adjectives used in conjunction with this band, but is only one element of the intricate design in place here.

“Heirs” starts off in a typical black metal direction, with the drumming keeping it from getting stuck there. On the title track the drummer also shines when he is not in the more straight-ahead pound that propels some of the bridges.

The guitar is well-layered, and this album sounds great from a production standpoint. When they dip down into the lower, darker riffs the guitars find power behind them. This is done while being so melodic that my iTunes tricked me several times by going into Alcest as soon one of the songs on this album ended. At times it was hard to tell where Alcest began and Vattnet ended.

The album closes on a heavier note, with the more typical growled vocals anchoring some of the floating post-rock parts that begin to flourish. If you wondered what Sannhet might sound like with vocals, this might not be far from it. The melodic builds still pack a punch before their finishing move turns out to be a sweeping guitar solo, which proves they have the chops to pull it off when they want to.

If you miss the days when Mastodon wasn’t writing radio songs and instead was really heavy with a sense of adventure, then you will certainly dig this album.

Settler will be released by Century Media on June 16th in North America (June 29th in Europe). To pre-order the album, visit this page at Indie Merch. The band will also be touring North America with 1349 and Necrophagia. The schedule is below, followed by videos for four songs from the album.