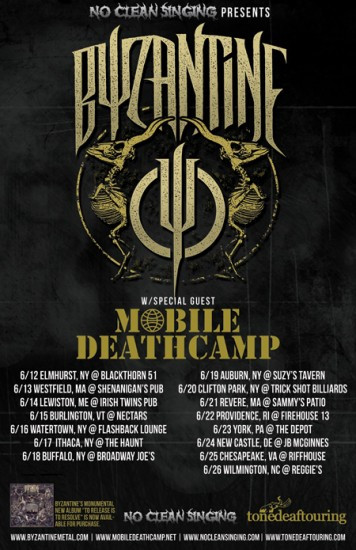 For East Coast fans of Byzantine, we’ve got an update on the schedule for the tour we’re sponsoring that begins later this month, with support from Mobile Deathcamp. The new schedule, which reflects a few changes, is shown on the flyer above.

The tour begins in Elmhurst, NY, on June 12 and concludes in Wilmington, NC, on June 26, and will lay waste to 15 cities along the way.

If by some chance you haven’t yet heard the band’s new album To Release Is To Resolve, check out the official videos below. The album can be ordered on CD from the band via this link:

And if you want to support kick-ass DIY metal, in addition to having a hell of a good time, get yourself to one of those venues if you possibly can this month.

One Response to “A BYZANTINE TOUR UPDATE”