Earlier today our contributor KevinP, a notoriously hard man to please, named Amestigon’s new album Thier the best release of the month just ended (here). That’s not to suggest it’s merely a highlight of the month of May, because its impact can’t be confined to a single month’s worth of new albums. Though 2015 isn’t even half-finished yet, we expect to see Thier in the upper reaches of year-end lists when 2015 draws to a close. Take the opportunity now to hear this remarkable work for yourselves, as we stream all four of Thier’s titanic tracks for the first time.

Though Amestigon trace their roots to the mid-’90s, the album is still something of a surprise. The band did not release a debut album until 2010’s Sun of All Suns, and despite the quality of that debut, Amestigon still flew under the radar. Thier should change that, in dramatic fashion. 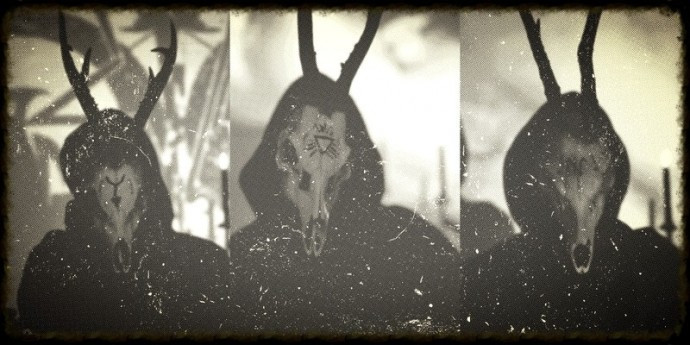 “Almost an hour of music spread across four tracks and dripping with evil atmosphere.  It’s not easy to make things interesting, let alone hold the listener’s attention, when you have songs ranging from 12 to 20 minutes in length, yet they manage to do it.  Clever use of keyboards layered in the background that never overpower the ferocity of the vocals or guitars.  The production is superb, as you can hear every instrument and appreciate its implentation toward the final goal….  One word:  REMARKABLE”

When I wrote about the song “358” after first hearing it, I also tried to sum up a listening experience that’s very difficult to describe:

“What makes the song so striking is its success in combining storming black metal savagery with slow, sweeping waves of gripping melody and pavement-cracking hammer blows. The cracked-ice and poison in the vocals, the wordless voices of a choir, and the powerful, sludgy low end in the music combine with those other ingredients to create a grim sense of otherworldly threat in the aura of the music. It’s a dramatic, inventive piece that’s almost a hybrid of doom and black metal — and I highly recommend it.”

Each of the songs individually is gripping. Listening to them one after another is a wholly immersive experience, a trip through soundscapes that are often breathtakingly majestic, just as they are often emotionally harrowing. The melodies have sweeping breadth and powerful resonance; they reach epic levels of doomed grandeur and they will haunt your memory.

And it is undeniably true that although the songs are all of ambitious length, they’re so beautifully constructed, so beautifully performed, and so spellbinding that they don’t wear out their welcome. This is utterly enthralling melodic black metal that’s fierce, crushing, atmospheric, and mysterious, all at the same time, the kind of music that spirits you away from your surroundings and your preoccupations and returns you in an altered state of mind.

Thier was released in CD form on May 28 by the World Terror Committee and is available for order HERE. A vinyl pressing is expected at a later date, and the album will also soon become available digitally.

2 Responses to “AN NCS ALBUM PREMIERE: AMESTIGON — “THIER””