Grind is very hit or miss with me, and usually a miss.  But every so often a true gem rears its filthy head and tickles me where I fancy.  This is one of those records.  Not merely content to be “just another grindcore album”, this has touches of cybergrind, a couple of ‘danceable moments’, and a 7-minute doomy closing number.  Yowza indeed.

I usually have a full grasp of any record by about the fifth or sixth full listen.  I know what to expect, I can anticipate a cool moment coming up, and generally feel like I know long-term how I’ll view it in the context of a band’s catalog (or against other albums released that year).  This album blows that theory out of the water.

I’m probably on my ninth or tenth listen and I still can’t fully wrap my head around it all.  I obviously enjoy it, it makes me come back for more, but I just can’t seem to properly digest it.  Call it gothic doom extreme avante garde metal or just plain weird Frenchie stuff.  It’s also 75 minutes,  so a lot to take in.  Well worth the investment. 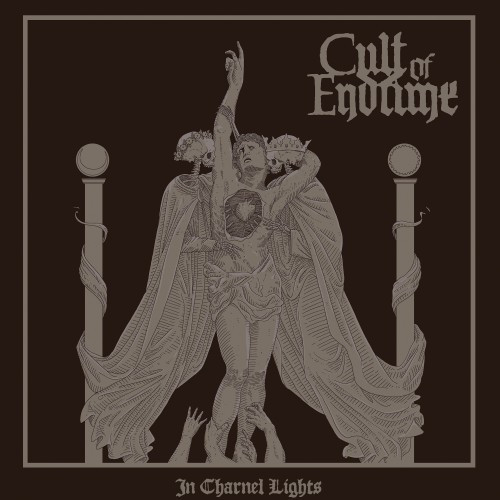 3.  Cult of Endtime – In Charnel Lights

Finland — check.  Death metal — check.  Debut album — check.  It’s heavy, it’s doomy, it’s brutal.  Sometimes you just need a solid, chunky, fat, sledgehammer riff machine to get you through the day.  Not much else needs to be said.

I’ve known of Sigh since their inception in 1990 (deliberate old school cred mention), but can’t say I really ever sat down and listened to any of their albums from front to back.  Heck, I was even aware of their transition to a much more colorful and theatrical version of black metal as the years have gone by, but I still (for no real reason) just never delved into their catalog.  So when I finally got off my ass and did (with this record), I was more than pleasantly surprised.

This album is just as I said:  colorful and theatrical black metal.  At times it sounds like an extreme version of Diablo Swing Orchestra (yes, I mean that in a GOOD way, as I enjoy DSO).  Plenty of the guitar work reminds me of old Nocturnus (circa The Key), which is yet another positive attribute.  It also just feels like the band is having a grand ‘ole time with this.  It’s not overly serious, but by no means “campy”.  Guess I have some more albums of theirs I’ll need to investigate now.

Knowing that this Austrian band features two former members of Abigor and that the album is being released on W.T.C. Productions will be enough for some of the black metal horde to scoop it up.  But this is also an album that transcends the mere genre or specific fans of “black metal”.

Almost an hour of music spread across four tracks and dripping with evil atmosphere.  It’s not easy to make things interesting, let alone hold the listener’s attention, when you have songs ranging from 12 to 20 minutes in length, yet they manage to do it.  Clever use of keyboards layered in the background that never overpower the ferocity of the vocals or guitars.  The production is superb, as you can hear every instrument and appreciate its implentation toward the final goal.   I haven’t heard their debut album, which was released in 2010, to use as a basis for comparison, but if it’s anything even remotely close to this one, I’m going to have to.

For a full stream, check out our premiere of the album HERE, and this is the video for the song “358”: