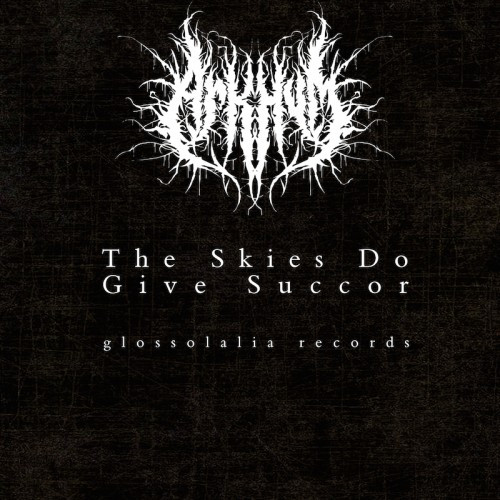 NCS and Oregon’s Arkhum go waaaaay back. We first featured the band in July 2010 (here) on the strength of rough mixes of their first three songs and the eye-catching artwork for the album on which they were destined to appear — Anno Universum. We’ve written about them many more times since then, and today we’re happy to bring you a premiere of the first new Arkhum music since their second full-length in 2013, Earthling (reviewed here). It’s a pre-production demo of a song named “The Skies Do Give Succor”, which in final form will appear on the band’s third album, projected for release in early 2016.

An aura of gloom and doom shrouds “The Skies”, its grim, dissonant guitar melody writhing around the somersaulting bass notes and the potent drum beats, which move from tribal pounding to bursts of machine-gun blasting. Kenneth Parker’s scathing shrieks tear like claws against skin, relenting long enough for the song to slow and drift into a bass-led interlude whose sombre tones are accented with the clash of a cymbal and Stephen Parker’s delicate guitar work.

The music builds again, with layered guitars and gruesome roars generating a renewal of the music’s disorienting atmosphere and that prominent bass line adding a contrasting kind of warmth, like the embers of a fire glowing in the chill of a forbidding forest at night.

Arkhum have evolved since their early days, and this new song reveals a band continuing to explore the most progressively oriented black-metal elements that surfaced in Earthling, more akin to songs like “The Dim Effulgence of Perpetuity” than the jet-fueled mayhem of “Artificer; Or the Contingency of Suns”. I suspect the new album will be as multi-faceted as the last one, but until we have a chance to find out for sure, we can enjoy “The Skies Do Give Succor”. Hope you like it as much as I do.

One Response to “AN NCS PREMIERE: ARKHUM — “THE SKIES DO GIVE SUCCOR””